Note:  The Chicago Bears officially celebrated their centennial last season base on their origins as a semi-pro team in Decatur.  Today marks the 100th anniversary of the Decatur Staley's first game in a new professional league. The launch of a pro league had been delayed by the world-wide Spanish Flue pandemic of 1918-19.  This year the league struggles to play during the Coronavirus pandemic which has shortened the season, kept fans from stadiums, and has hit some teams hard threatening the completion of the season.

Somewhat astonishingly the team has a 4 and 1 record going into this Sunday’s game against the Carolina Panthers despite an under-productive offense.  In their last game they eked out a narrow win over Tampa Bay and their new Quarter Back Tom Brady, late of the New England Patriots.  So today we look back at that 1920 game and the evolution of Da Bears.

On October 17, 1920 there was a football game at Rock Island, Illinois.  The Decatur Staleys, under the leadership of former professional baseball player George Halas, beat the home town Rock Island Independents by a score of 7-0.  The only thing that made the game memorable was that it was the first game played by teams of the new American Professional Football Association; a fledgling professional league renamed two years later as the National Football League (NFL.) 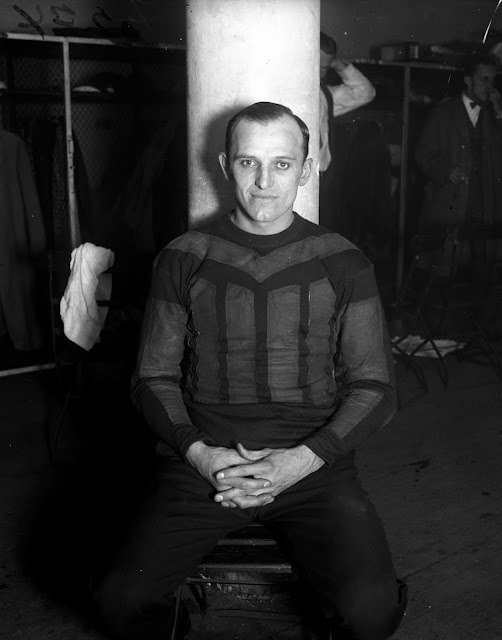 George Hallas of the Chicago Bears in 1922.

The Staleys, who started out as a semi-pro team in 1919 sponsored by the food starch producer A. E. Staley Company, had a pretty good season finishing with 10 wins, 1 loss, and 2 ties.  They finished second to the Akron Pros.

The new league was the brainchild of legendary athlete Jim Thorpe, player-coach of the Canton Bulldogs.  He had been promoting the idea among other independent pro and semi-pro teams since 1917, but World War I and then the Spanish Influenza pandemic prevented anything from happening.  Thorpe and Leo Lyons, owner of the barnstorming Rochester Jeffersons got representatives from a number of teams to gather for a meeting in August 1920 in a Hupmobile Dealership in Canton, Ohio to launch the league.    Thorpe was elected President of the league in addition to his player/coach duties with Bulldogs. 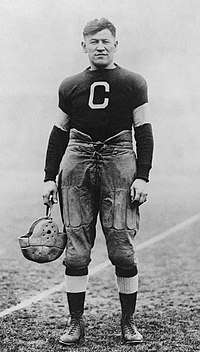 Legendary Native American athlete Jim Thorpe of the Canton Bulldogs was a founder of the new profesional football league, its first president, and public face.

In 1921 Halas got permission to take his team to Chicago.  The Staley Company gave him $5000 to keep the name for at least the first year.  The team played Cubs Park (now Wrigley Field), finished with a 9-1-1 record, and won the League’s second Championship. 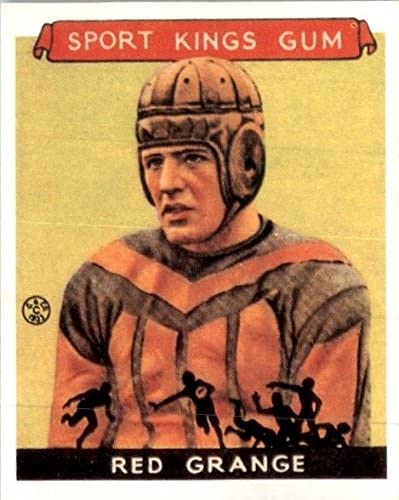 College football hero Red Grange, immortalized in the purple prose of sportswriter Grantland Rice,  became the fledgling NFL's first superstar when he signed with the Beats.  Hallas changed the team colors to  blue and orange in honor of Granges's alma mater, the University of Illinois.

Freed from his contractual obligation Halas renamed the team the Chicago Bears in 1922 as a nod to his stadium hosts, the Chicago Cubs.  The league was still struggling in 1925 when Hallas signed the biggest star in college football, Red Grange, the Galloping Ghost of the University of Illinois.  In honor of his prize player, Halas changed the team colors to the orange and blue of the Illini.  The move elevated the prestige of the pro league which played second fiddle to hugely popular inter-collegiate football in the sports press.

Today only two of the original franchises remain active, neither of them in their original location.  The Cardinals have moved twice, from Chicago to St. Louis and then to Arizona.  The Staleys became the Bears after only two seasons and moved to Chicago after one.  But the team is the only one still owned by the same family.

Virginia Halas McCaskey, George’s daughter who was born in 1923, the year the team became the Bears, is the principle owner.  After her son Michael McCaskey retired as team president in 2009 he was replaced by Ted Philips and for the first time day-to-day management of the team is not in family hands.  Michael’s brother George, however, is still the Chairman of the Board.  Members of the Halas/McCaskey family own 80% of the company stock and show no signs of selling. 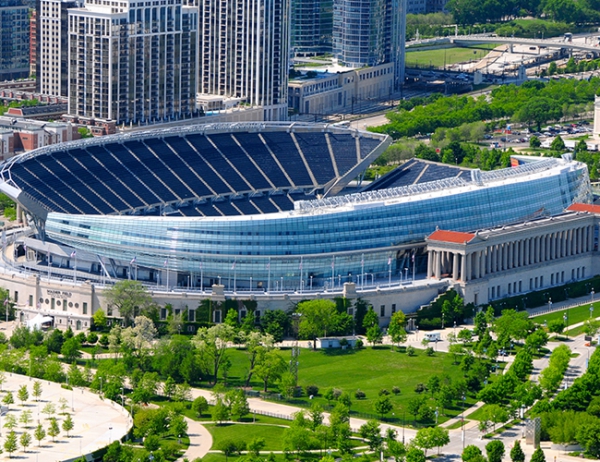 The Chicago Park District plunked this modern bowl with plenty of lucrative sky boxes with in the shell of its old neo-classical Soldier Field, a lake front stadium dating to the 1920s.

The team now plays in the renovated Soldier Field which famously resembles the crash site of a UFO thanks to a favorable lease from the Chicago Park District, fancy bond deals involving the City and State, and hundreds of millions of dollars’ worth of infrastructure work provided by the City at no cost to the team at all.

Former coach Mike Ditka used to say that old George Halas “Threw nickels around like manhole covers.”  Halas would undoubtedly be proud of the scams on the public his heirs have pulled off.