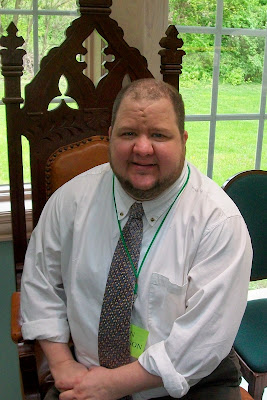 In the end, it wasn’t even close.  It was more even than a blow out.  The Unitarian Universalist Congregation now in McHenry, Illinois, unanimously voted to call the Rev. Sean Dennison as its new settled minister.  123 of the 165 members cast ballots, all in the affirmative.

Rev. Dennison was born and raised in Iowa and became active as a Unitarian Universalist lay person the UU Fellowship of  Ames  before deciding to enter seminary at Star-King School for Ministry in California.  At the same time the single mother had to come to grips with gender identity and in a sometimes wrenching process he described in a sermon The Integrity of the In-Between, transitioned to a male over the course of his educational training.

As a transgender man he was called to serve the South Valley Unitarian Universalist Society in Salt Lake City, Utah.  He successfully led the congregation for seven years in a very conservative state not only helping the congregation to grow and thrive, but to become a social justice beacon.

For the last year Rev. Dennison has served as interim minister at the Unitarian Universalist Fellowship of San Louis Obispo in California.

He has been an important leader in Unitarian Universalist denominational affair serving as President of the Mountain Desert District UU Minter’s Association, a member of the Star King Board of Trustees, and a co-founder a Board member for Transgender Religious Professional  UUs Together (TRUUsT).  He has also been a facilitator for UU diversity programs, is a sought out speaker at a District and UUA General Assembly meetings.  He will be a member of the Accountability Team at the upcoming Justice General Assembly in Phoenix this June.

Rev. Dennison is a well known presence on the web with his highly regarded personal blog Ministare.

In the small world of Unitarian Universalism Rev. Parker was rightly described as a “rock star.”

The move capped a two and a half year search process which began with the retirement of the long time minister of the congregation in Woodstock, the Rev. Daniel Larson.  The congregation used the time for in-depth self assessment and to tighten governance, administrative, and committee function with the guidance of three interim ministers, the Rev. James Hobart, the Rev. Karen McFarland, and currently serving Rev. Jennifer Slade.

In the middle of the self-assessment process the Congregation also voted to accept a generous offer for the donation of the former Haystacks Manor restaurant building in the city of McHenry as its new home.

The Search Committee began a serious search this year.  In the end they unanimously decided to recommend Rev. Dennison for consideration.

Rev. Dennison and his partner Toni expect to be moved to McHenry County in July and begin preaching with the new Church Year in September.
Posted by Patrick Murfin at 4:20 PM