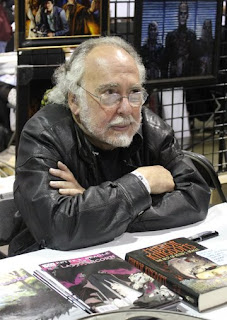 It’s the birthday of Peter S. Beagle, born in the Bronx in 1939.  He is best known—and beloved—as the author of the fantasy fable The Last Unicorn, a masterwork completed in his twenties.  He has also written short stories, non-fiction, screen and teleplays—and poetry.  In fact he first gained attention as a 15 year old for his poetry, which won the annual Scholastics Writing Awards contest in that category for high school students.  About ten years later I entered a short story into the same contest with considerably different results.  I don’t want to talk about it.

The prize was a full-ride scholarship to the University of Pittsburgh where he honed his writing skills and earned cash money tutoring jocks who would otherwise disgrace the school and themselves.  One of them as Iron Mike Ditka who, though he will never admit it, owes a thing or three to a kid who dreamed of dragons.

Beagle astonished his professors.  He was entirely original, writing and thinking in ways that were alien to scholars steeped in 20th Century realism.  But at least some of them were smart enough to recognize talent and to help him knock off rough edges and hone his sentences.  With their help, at the age of 19, he finished the manuscript for his first novel, A Fine and Private Place which was published in 1960.  The book was a lyrical meditation on life, cowardice, death, immortality, and most of all, love.  It mystified some reviewers but marked its author as a writer to watch.

But Beagle was not quick with a follow up.  He returned to New York, plunged into a beatnik life style and consumed himself with reading.  Of particular interest was the work of J.R.R. Tolkien, whose work was then little known in the U.S.

I first encountered Beagle in a drug store paperback rack about 1966 in Cheyenne, Wyoming.  The Ballantine edition of I See by My Outfit  featured two bearded dudes in cowboy hats racing across the cover on…Vespas.  I plunked down my 75¢ and took my chances.  Good investment.  I carried that book around for years until the cover fell off and the pages separated from the cheep spine.

Inspired equally by the old cowboy ballad from which it took its title, Jack Kerouac’s On the Road, and the Lord of the Rings trilogy, Beagle and a pal, two self described New York Jews, set off on a cross country quest atop those Italian Scooters.  A fine, true life odyssey.  And it inspired me to read both Kerouac and Tolkien.  Enjoyed both, but decided that Beagle was a better writer than the former.

Naturally, I picked up a copy of the new book by a favorite writer a couple of years later.  And I was mildly surprised that it was a fantasy, not having yet discovered his first book.  The Last Unicorn was a runaway hit with readers across generations and tastes.  Even high minded literary critics who routinely sneer at “mere genre fiction,” were impressed.  In hard cover, trade paperback, and popular paperback editions more the nine million copies have been sold since the first edition.

The success somewhat derailed Beagle as a novelist and story writer for a few years.  He was drawn to screen writing.  Naturally, he adapted The Last Unicorn for what became a classic animated film released in 1982.  But first he co-wrote scripts for The Dove a family oriented adventure about a teen-ager on a solo sail around the world produced by Gregory Peck and a made for television movie about a black high school athlete with Leukemia, The Greatest Thing That Never Happened.  Then legendary animator Ralph Bakshi taped him for a dream job—writing the original film of The Lord of the Rings.  Beagle also did scripts for episodic TV, most notably the episode Sarek for the original Star Trek—the story that established much of back story for Mr. Spock.

During the ‘70’s and ‘80’s Beagle also wrote the text for several art and photography books.

He began to find his way back to fiction when he published a short novel using characters he had established in earlier stories.  The Folk of the Air published in 1985 firmly established a new universe where a west coast slacker meets a group very like the Society for Creative Anachronism who members start to become the wizards, witches, warrior, wenches, and weirdos they have pretended to be.  Subsequent stories and novels, published at a quickened pace after 1990, have expanded on that world.

And now Beagle is re-writing and expanding the original short novel and preparing sequels.  Likewise he has revisited the Unicorns of greatest triumph and is working on a new series in that world.

Beagle’s revived production of fantasy fiction, including The Innkeeper's Song and it sequels, The Unicorn Sonata, Tamsin, plus chapbook novellas and several story collections grabbed the attention of fans and critics alike.

Over the last decade or so Beagle has been showered with awards for both his new work and the solid production of a career.  These include the Inkpot Award in 2005, Hugo Award in 2006, Nebula Award in 2007, the WSFA Small Press Award (for short fiction published by an independent small press), and in 2011 the World Fantasy Award for Life Achievement.

Beagle has also returned to poetry publishing collections that included his very early work as well as new material.  In 2009 he launched a year-long by subscription on-line project called 52/50 with an original poem or song for each day.

Today we are going back to some of Beagle’s astonishing early work.  Here are some examples.

I keep nine dragons in an old cow barn,
And sometimes I go down to look at them.
I didn't build the barn — I bought it
From a little old lady from Pasadena,
Who was arrested, the last I heard,
For selling the North Star
To a blind man.
I bred the dragons.
I fed them on sorrowful meat and marmalade
And lighter fluid and an occasional postadolescent
Chicken. And then I built a house
Far away from the stable, because things burn down
Where dragons are.
Outside the barn
Are fallen birds, their wings scorched
To fluff. The earth is livid, broken veined and rashed,
Pimpled with crimson ash and dragon droppings,
Big enough to fertilize the whole frigid world.
Within are dragons.
The roof beams are low.
They are crowded and it makes them short tempered.
They smell of marshes and the lowland sea,
Starfish and seaweed and smashed clams dying in the sun.
They have small ears and their eyes are octagonal;
Their teeth are urine-yellow as contempt, and the hairs of their manes
Are like chains.
The barn is lanced
With the raucous fire of their laughter, for they do
Breathe fire. Or perhaps the fire breathes them.
Dragon-scented fire it is, and it casts their shadows
On the mud-plastered walls.
The males are coin scaled and sluggish.
Their wings are short and weak, useless
As an idea to a general. They cannot fly.
They will not walk. Therefore they lie amid applauding ashes
And breathe irrelevant damnation.
But the females!
They are the purple of outdoor claustrophobia,
And they move like dusk. They have winter-colored wings,
As wide as cathedral doors. They pace the floors
Of their stalls, and their claws make an impatient sound,
As if they were scratching at the earth
To be let in.
It is a waking sound.
I hear it in my high bed at night, and I cannot sleep
Until they do. And they never sleep
Unless they are satisfied. And they are never all satisfied
At once. There is always someone awake.
When I come in, their heads turn on their crested necks,
And they look at me out of their stained-glass eyes.
They know my name.
I have mated with them.
I'm not the first. I never was an innovator. Knights used to do it.
They killed them later, when the angled eyes were dark with sleep,
And the knights were ashamed. So they killed them
And some were made saints for it. But I think
They were a little lonely in bed with their wives
For a while.
I have embraced dragons in my time.
I have held my mouth on white-toothed fire, and been drawn
Down the whirlpool gullet that seared me to wakefulness.
I have felt claws sunk in my back,
Straining me against silver-dollar scales, and heard a strange heart
Exploding in my ears like a drunken grandfather clock.
And I have left my seed to care for itself
In a new and bitter cave.
Then I have crawled away
And lain in the fields, my flaking skin crackling like wrapping
paper, reddening the well-meaning air
With my blood. And from the stable
Through the scarred, shut door, there comes no sound
Of querulous claws.
A dragon is sleeping.
I think that I shall have a son someday.
He will be handsome, with sharp teeth.

Constructive Criticism
(As I write this, in November of 1959, they’ ve been doing the book burning bit in exotic Memphis. The American Legion Anti-Smut Committee, or title to that effect. D.H. Lawrence, Grace Metalious, and Shelby Foote, side by side. They would have burned Henry Miller too, but the head of the ALASC locked up his library and stood with his back to the door.)
I do not say that what you do is wrong.
Book burning is a good idea at times.
A concept can be shot to hell by song;
A ruler can be riddled through by rhymes.
A fire's a pretty thing. When men began
To feed false poets to the hungry gold,
They burned the book, and if they found the man —
Well, fires are good, and frightened gods grow cold.
But let us have some breadth of vision here!
Not one fire, but a thousand 's what you need.
For if the word of man is what you fear,
You must burn all the words. You see, they breed.
Reflect, my gentlemen, and count the cost:
If you burn one, burn all — or you are lost.

The Ferret Speaks Under William Blake'’s Window
Well, Mr. Blake sir, here I am,
Neither a tiger nor a lamb —
That pair of fearful symmetries
Through which a poet hopes to seize
The manes and tails of mysteries.
No, I am I. My furious pride
Is not by beauty justified.
Marrow's my meat, and blood's my drink —
I hunch and scuttle, and I stink
Of small hot thoughts you dare not think.
Send out your tiger, bid him kill!
He may retreat — I never will.
I have no thirst blood cannot slake;
I ask for naught I cannot take —
And least your liking, William Blake.
Yet, like your lamb, your shepherd boy,
I also dance for thoughtless joy,
Flickering, reeling, spinning free
Of all but that old ecstasy
That trembles, maddens, dances me.
Therefore, if you should chance to make
A little place for dancing's sake,
I would accept it, William Blake.
–Peter S. Beagle
Posted by Patrick Murfin at 2:00 AM