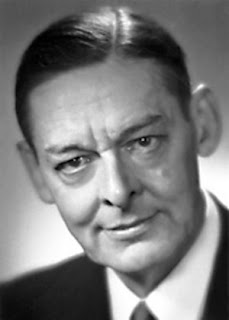 It was a very windy night here in McHenry County.  Which brought to mind an effort by that apostate Unitarian, T.S. Eliot, who was long considered the most important American—or Anglo-American—poet of the 20th Century mostly because his poems were so dense and hard to understand.

Thomas Sterns Eliot was born into the western branch of Unitarianism’s most distinguished family.  The Eliot family contributed two presidents of the American Unitarian Association, a noted President of Harvard and innumerable important ministers.  They were related to such other prominent families as the Mays, and the Wares.
Thomas’s father was a successful St. Louis, Missouri businessman and prominent local Unitarian layman. His mother was a former teacher and a volunteer social worker.  The youngest of 7 children, he was sickly and drew special attention from his parents.   As a boy he was taken to Gloucester, Massachusetts every summer to keep up his connections with the rest of the Eliot clan.
Of course Eliot was sent to Harvard, where his cousin Charles William Eliot had just concluded his famous Presidency.  He excelled as a student but was openly critical of the curriculum, which he did not consider sufficiently rigorous.  He quickly gained notice for his writing, which appeared in student publications and literary journals.

Upon graduation he did graduate work at the Sorbonne in Paris, back in Harvard and at Merton College, Oxford.  His wide ranging studies exposed him to Parisian bohemianism and to neo-catholic monarchism.  He was drawn to and repelled by both.  The experimental possibilities offered by bohemia thrilled him but a yearning for order drew him to philosophic conservatism.  Out of the war of these ideas, and his struggle with his liberal Unitarian background came the poems that would cement his reputation.

He wrote The Love Song of J. Alfred Prufrock, Portrait of a Lady and other seminal poems in 1910 and 1911.  The same year he was pursuing his doctoral degree at Harvard working in a group that included George Santana, William James and the visiting Bertrand Russell.  Heady company indeed.

In 1914 Eliot was studying at Marburg, Germany.  The impending onset of war sent him fleeing to London where Conrad Aiken showed his poetry to Ezra Pound.  Sensing a possible disciple, Pound forwarded Eliot's work to Harriet Monroe’s Poetry magazine where it created a sensation.

In 1915 Eliot was introduced to vivacious, strong headed and patrician Vivien Haigh-Wood.  They impulsively married that June.  The former dancer had a long history of mental and physical breakdowns that alarmed and alienated Eliot’s parents.  Her refusal to cross the Atlantic in wartime meant that Eliot was forced to take up permanent residence in England.  At first they shared a London flat with Bertand Russell, but a brief affair between Russell and Vivian put a natural strain on the relationship.
Eliot struggled to support the family by teaching, lecturing and reviewing.  He became assistant editor the avant-garde magazine The Egoist, and was finally able to obtain real employment in 1917 when he took a position in the foreign section of Lloyd’s Bank.  Financially secure for the first time in years, Eliot was able to concentrate on his writing in his spare time.  Prufrock and Other Observations was published that year with quiet financial support of Ezra Pound.

Through Russell and others Eliot gained admission to the moneyed world of the English country-house set.  With his growing reputation and Pound’s tutelage he mixed with the likes of William Butler Yeats and continental intellectuals.  With far greater polish than his abrasive mentor, Eliot's drawing room manners and smooth conversation gained him admittance to the highest levels of British society.
In 1920 he published a second slim volume of poetry in which he openly spoke of his struggles with his father’s faith.  Mister Eliot’s Sunday Morning Service was part of that collection.  The same year he was editing James Joyce’s Ulysses for the Egoist and becoming publicly identified with Pound’s Imagist movement.

Eliot’s father had died in 1919 and Vivien’s emotional and physical health was also poor.  An extended three-month visit from his mother and sister in the summer of 1921 in an attempt at reconciliation drove Eliot to a break down himself.  After three month’s rest in a Swiss asylum Eliot broke through a writer’s block and was able to finish his epic The Wasteland, first begun in 1919.  The poem was published in the influential magazine The Dial with an introduction and commentary by Edmund Wilson in 1922.  Eliot now stood at the undisputed head of the avant-garde, far overshadowing Pound.

The same year Eliot assumed the editorship of a new publication, The Criterion which aimed to review the whole of European culture.  Vivien's near death in 1923 nearly precipitated a second break down.  Again beset with money worries he over extended himself with his work at the bank and his continuing editorial and literary endeavors.  He was saved in 1925 when he was hired as literary editor of a new publishing firm headed by Geoffrey Farber.
The Hollow Men, published in Eliot’s next collection in 1925, represented a final break from his father’s Unitarianism.  In 1927 he was baptized into the Church of England and took out British citizenship the same year.  He joined a group of political conservatives and declared himself “a classicist in literature, royalist in politics, and Anglo-catholic in religion.”  Thereafter more and more of his work was religious.  Farber published a series of his religious poems including Journey of the Magi and Ash Wednesday in pamphlet form.

Some of these works, like Journey took the form of dramatic dialog and presaged Eliot’s interest in drama.  Religion and drama intersected in 1935 with a commission from Bishop Bell for a church pageant for Canterbury Cathedral which became the widely admired Murder in the Cathedral, the story of the martyrdom of Thomas á Becket.

Elliot’s marriage to the increasingly unstable Vivian continued to deteriorate through the late twenties.  By the thirties they were estranged and living apart, though Eliot refused to consider divorce for religious reasons.  In 1939 Vivian was finally committed to a mental hospital.
Eliot continued to publish increasingly neo-classicist poetry rejecting his earlier bold experimentation.  He dabbled in drama, mostly unsuccessfully.  He served as an air raid warden in London during the Blitz and published his last major poetry Four Quartets in 1943.

Vivian finally died in 1947 as Eliot dedicated himself more and more to drama. He finally had a hit with a Noel Coward-like play The Cocktail Party in 1949.  The year before Eliot was awarded the Nobel Prize for Literature and stood at the pinnacle of his career.
The fifties brought more dramas, and the cloak of a literary and political elder statesman, ever more Tory and ever more Orthodox.  Eliot’s 1957 marriage to Valerie Fletcher brought him something like happiness in his final years.  He died in 1965 and had his ashes buried in his home church.

Through most of the century, Eliot was regarded as the greatest English language poet of his age.  The discovery of virulent antisemitism in his private correspondence tarnished his reputation and literary fashion shifted from the obscurism of his most famous early poems.  Yet his star is dimmed only slightly and there is still much to learn from the man who rejected his Unitarian roots.

Rhapsody on a Windy Night

Twelve o’clock.
Along the reaches of the street
Held in a lunar synthesis,
Whispering lunar incantations
Dissolve the floors of memory
And all its clear relations,
Its divisions and precisions,
Every street lamp that I pass
Beats like a fatalistic drum,
And through the spaces of the dark
Midnight shakes the memory
As a madman shakes a dead geranium.
Half-past one,
The street lamp sputtered,
The street lamp muttered,
The street lamp said, “Regard that woman
Who hesitates towards you in the light of the door
Which opens on her like a grin.
You see the border of her dress
Is torn and stained with sand,
And you see the corner of her eye
Twists like a crooked pin.”
The memory throws up high and dry
A crowd of twisted things;
A twisted branch upon the beach
Eaten smooth, and polished
As if the world gave up
The secret of its skeleton,
Stiff and white.
A broken spring in a factory yard,
Rust that clings to the form that the strength has left
Hard and curled and ready to snap.
Half-past two,
The street lamp said,
“Remark the cat which flattens itself in the gutter,
Slips out its tongue
And devours a morsel of rancid butter.”
So the hand of a child, automatic,
Slipped out and pocketed a toy that was running along the quay.
I could see nothing behind that child’s eye.
I have seen eyes in the street
Trying to peer through lighted shutters,
And a crab one afternoon in a pool,
An old crab with barnacles on his back,
Gripped the end of a stick which I held him.
Half-past three,
The lamp sputtered,
The lamp muttered in the dark.
The lamp hummed:
“Regard the moon,
La lune ne garde aucune rancune,
She winks a feeble eye,
She smiles into corners.
She smoothes the hair of the grass.
The moon has lost her memory.
A washed-out smallpox cracks her face,
Her hand twists a paper rose,
That smells of dust and old Cologne,
She is alone
With all the old nocturnal smells
That cross and cross across her brain.”
The reminiscence comes
Of sunless dry geraniums
And dust in crevices,
Smells of chestnuts in the streets,
And female smells in shuttered rooms,
And cigarettes in corridors
And cocktail smells in bars.”
The lamp said,
“Four o'clock,
Here is the number on the door.
Memory!
You have the key,
The little lamp spreads a ring on the stair,
Mount.
The bed is open; the tooth-brush hangs on the wall,
Put your shoes at the door, sleep, prepare for life.”
The last twist of the knife.