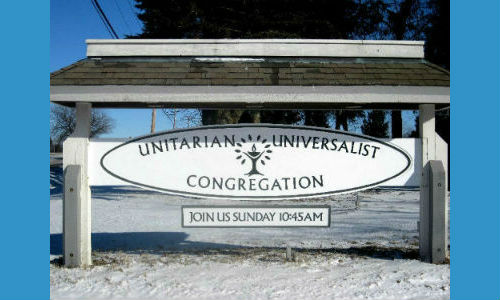 When the Unitarian Universalist Congregation moved into their new McHenry home, the former Haystacks Manor restaurant at 5603 Bull Valley Road,  in January they were leaving behind a 147 year history in Woodstock.  Since then the vibrant congregation has been settling into its new home, making adjustments, and planning for the future.  It has been a busy few months.

Now the Congregation is getting ready to open their doors to their new neighbors in McHenry with an innovative program combining great traditional roots blues and original poetry.  Social Gospel in Words and Music presented this Friday evening, April 6 at 7 PM will feature Andy Cohen, Memphis based blues guitarist and preservationist of a wide variety of Southern traditional music, and McHenry County poet and activist Patrick Murfin.

The program is presented by the congregation’s Social Justice Committee.  Members of the church hope it will be a sample of the kind of innovative cultural and educational programming that will find a home in the new facility.  They envision not only church sponsored events, but also programs by other groups in the community.

Typically. the program reflects the deep commitment to social justice causes for which the congregation was well known for in Woodstock.  Proceeds from a requested $10 donation at the door will support the Interfaith Committee for Detained Immigrants post release program, which provides assistance to those released from Federal custody after it has been determined that they were not in violation.

There will be a reception for the artists following the program.  CDs by Andy Cohen and Murfin’s collection of poetry,  We Build Temple in the Heart will be available.

For more information call Patrick Murfin at 815 814-5645 or visit http://joomla.uucofwoodstock.org .