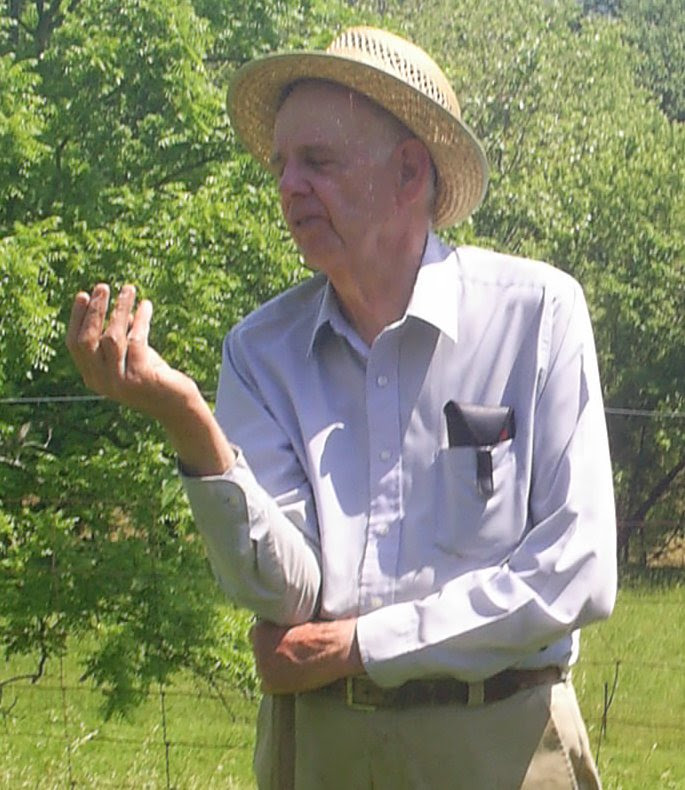 Note:  Due to conflicting demands, today's entry and poem are an exact re-run of the one on this date last year.  Way to celebrate Earth Day—recycling!

How better to honor Earth Day than with a salute to the unofficial poet laureate of the American environmental movement?

Wendell Berry was born with deep roots in the soil of Henry County, Kentucky in 1934.  His father was a lawyer and tobacco farmer.  Both sides of his family had tilled the local soil for five generations.  After graduating from a local military academy, he attended the University of Kentucky where he decided to become a writer.  He completed his Masters degree there in 1957 and married.  The following year he was named a Wallace Stenger Fellow at Stanford University where he studied under Stenger with Ken Kesey, Larry McMurtry, and other emerging writers. He continued academic pursuits with studies in Europe on a Guggenheim Foundation Fellowship before taking up teaching at New York University’s University College in the Bronx.

While in New York, he completed his first book of poetry, November Twenty Six Nineteen Hundred Sixty Three, a single long poem in ten stanzas as an elegy to John F. Kennedy and national loss.  Later in 1964 he published his first collection, The Broken Ground which explored the themes that would dominate his work, “the cycle of life and death, responsiveness to place, pastoral subject matter, and recurring images of the Kentucky River and the hill farms of north-central Kentucky.”

Berry returned to the University of Kentucky in 1965 to teach creative writing.  He moved in a circle of writers that included Thomas Merton.  He also began farming his property, Lanes Landing in north central Kentucky on the western bank of the Kentucky River, not far from where it flows into the Ohio.  He grows corn, grain, and maintains a kitchen garden on the land where he still lives, works, and writes.  Much of Berry’s writing—poetry, fiction, and non-fiction has been rooted in his experience on the land and in the surrounding community.

Berry left teaching in 1977 to devote himself to farming, writing and activism.  By then he had a major body of work already completed and was being recognized as voice of the emerging environmental movement.  In addition to a regular output of poetry including 26 volumes including chapbooks, short fiction, and essay memoirs of his farming experiences, Berry wrote practical guides to subsistence and small farmers for Rodale Press including Organic Gardening and Farming and The New Farm.  He has also written eight novels that together are a chronicle of a fictionalized Kentucky River town, Port William.  This long series has allowed him to trace the complex relationships between the land, the people, and the economic and technological changes that impact them.

Berry has also been a front-line activist not only for environmental causes, but against the Viet Nam War, nuclear energy, land raping mountain top removal coal mining, and against government regulatory inclusion that threaten to make small scale farming impossible.  Not content with just writing or speaking, Berry has frequently led or participated in demonstrations, including civil disobedience.

At age 75 Berry is still active both as a writer and activist.  He has been honored with many prizes and awards, most recently the National Humanities Medal  in 1965.