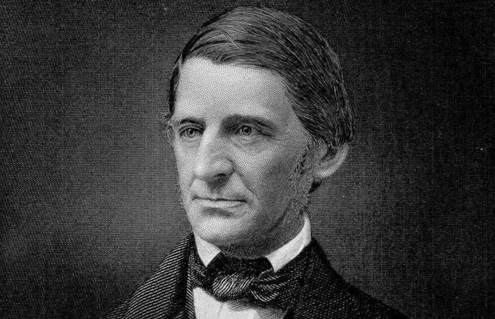 Today is Patriot’s Day in Massachusetts, a state holiday that the locals take very, very seriously.

Many of them even consider it more important than the Boston Marathon which is always on this day.  Patriot’s Day commemorates the opening of armed hostilities in the American Revolution with the battles of Lexington and Concord.

Fifty years after the fact Ralph Waldo Emerson commemorated the battles, part of which was fought on the road that passed his Concord home.

Emerson was the towering intellectual colossus of the New England Renaissance and the unquestioned leader of the Transcendentalist movement.

He was born the son of the influential liberal minister of Boston’s First Parish in 1803 and descended from a long line of notables including Revolutionary war heroes, poet Anne Bradstreet and early Puritan divines.

He was destined for Harvard and the ministry, following in the footsteps of his father, who died when he was eight years old.  Emerson was ordained in the new Unitarian ministry in 1826 and was called to Boston’s Second Church only two and a half years later.  He was an immediate success, his well-crafted and thoughtful sermons attracting large numbers, but he chaffed under the lingering conventions of style Unitarianism in the style of William Ellery Channing which was already calcifying into a new orthodoxy.  He resigned his pulpit in 1832 when he could no longer serve communion in good conscience.

The year before his nineteen-year-old bride died of consumption, probably contributing to his unease.
He undertook the grand tour of Europe, landing in Malta and traveling north through Italy, to Switzerland, France, England and Scotland.  He met Lafayette in Paris and John Stuart Mill, Samuel Coleridge and William Wordsworth in Britain.  He established a lasting relationship with Thomas Carlyle.

Upon his return Emerson launched a successful career as a lecturer on science, philosophy and theology while continuing to accept invitations to preach in Unitarian churches.  He settled into the family ancestral home of Concord in 1834 and remarried.   The comfortable income from his first wife’s estate erased any financial concerns and made it possible to refrain from returning to full time parish ministry.

In 1836 his first book Nature was published to immediate success.  Emerson’s beloved first son Waldo was born shortly after the publication of his book and his personal happiness seemed assured.  Starting with fellow Concordian Henry David Thoreau and Margaret Fuller, he began to surround himself with a coterie of intellectuals who would become known at the Transcendentalists.

He continued to publish philosophy and a lecture at Harvard, The American Scholar, delivered in 1837 would be called “our intellectual Declaration of Independence.”  The following year Emerson set off a storm of controversy when he delivered his Divinity School Address, a declaration of spiritual independence from the strict reliance on Biblical scripture and an avowal of individual conscience in determining religious truth.  This set off a long and nasty quarrel with the followers of Channing style liberal Christianity in the denomination.

Distressed by the reaction, Emerson gradually withdrew from all preaching, but lived to see Transcendentalism triumph as the principle strain of mid-century Unitarianism.

He dabbled in poetry, including The Concord Hymn, a commemoration of the opening battle of the Revolution which brought him public acclaim.  In 1840 he founded The Dial with Margaret Fuller, the influential magazine of the Transcendentalists.

In 1842 he was dealt a crushing blow with the death of his beloved son Waldo, from which he would never recover.  He was never again the sunny optimist of Nature.  His moving poem Threnody was an elegy to his son and appeared in his 1846 volume Poems.
Opposition to the Mexican War and outrage at the Fugitive Slave Law would dominate his public life in the next few years.  Ode, Inscribed to William H. Channing, reflects his outrage at the tepid response of Unitarian worthies and the perceived betrayal of New England statesman Daniel Webster.

He remained in demand on the lecture circuit the rest of his life, continued to write, and was showered with honors.  The last years of his life he returned to regular Unitarian worship at his Concord church. He died after a lingering decline April 27, 1882.

For years Emerson’s reputation seemed unassailable, but neo-conservatives have lately made him something of a whipping boy, blaming him for America’s moral decline into relativism and narcissism.  It is a right wing revisionist house of cards which cannot undo Emerson’s towering presence and lasting influence.

By the rude bridge that arched the flood,
Their flag to April’s breeze unfurled,
Here once the embattled farmers stood,
And fired the shot heard round the world.

The foe long since in silence slept;
Alike the conqueror silent sleeps;
And Time the ruined bridge has swept
Down the dark stream which seaward creeps.

On this green bank, by this soft stream,
We set to-day a votive stone;
That memory may their deed redeem,
When, like our sires, our sons are gone.

Spirit, that made those heroes dare
To die, and leave their children free,
Bid Time and Nature gently spare
The shaft we raise to them and thee.

—Ralph Waldo Emerson
Composed for and read at the dedication of the Obelisk, a monument to the battles of Lexington and Concord erected at Concord in 1836.