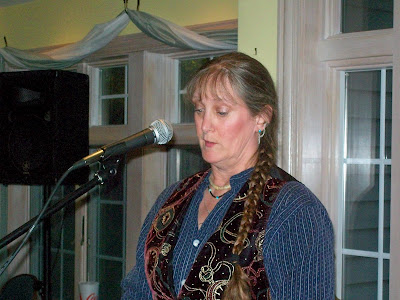 I am proud to introduce a new poet in today’s entry.  Julie Ann Monroe contacted me out of the blue after reading about the program Social Gospel in Words and Music in the local press.  She saw that we were benefiting the Interfaith Committee for Detained Immigrants post release program, which provides assistance to those released from Federal custody after it has been determined that they were not in violation.  She wanted to offer her help—and maybe a couple of poems.

Monroe had spent time on the border near El Paso doing volunteer work with undocumented immigrants.  She described in an e-mail what inspired her to write this poem:

We spent a lot of time at the border of Juarez/El Paso and we met so many people with so many stories.
This poem came to me after meeting Josefina, Wilma, Rosita.  they live in Juarez. Two of the women’s husbands have been killed by the drug cartel and the other woman watched her daughter raped in front of her just two weeks before we met. Their message was clear “tell them, tell them so they'll know and maybe then someone will help us.”

Later that evening our guide took us up on a mountain at night and we did a meditation, and then he asked us--who can show me where the fence is? The great American wall that keeps them from getting to us? We couldn’t tell. We were so close to it but we couldn’t tell. Just like the astronauts in space have said when looking down at earth....It is one, one planet under the sun...and we are one as well, they are our brothers and sisters and hence...the poem.

We invited Julie to read her poem on the program last night at the Unitarian Universalist Congregation in McHenry.  And the Social Justice Committee will probably be asking her to do an informational program for us on her experiences.

You didn’t see my tears today
I pushed them down with a swig of water and
Held them there.
If you had looked at me
The rivers of compassion would have crashed
Over the rocks in my heart and I would have broken
The bonds of my comfort and I would have wept till the river
Swelled at the banks
I would have wept till the desert tasted my salt
You didn’t see my tears today
It was the only language I could speak to you and I
Was mute
Later they came again, my tears
When the moon appeared and carefully held hands with the stars
Over your town
No one seemed to notice
The moon had crossed the border
No one seemed to notice
My heart had traveled too.

—Julie Ann Monroe
Posted by Patrick Murfin at 2:12 AM