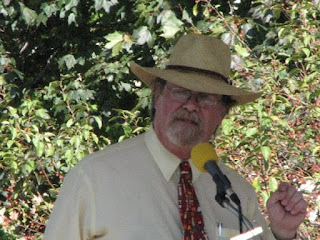 You knew I had to get around to that extremely minor Midwest poet, Patrick Murfin sooner or later.  So it was sooner.

I will be appearing at tonight’s program at the Unitarian Universalist Congregation, 5603 Bull Valley Road in McHenry, Social Gospel in Words and Music. The music will be provided by Memphis based bluesman Andy Cohen.

We scheduled this event around Andy’s availability while touring.  Turned out he was free tonight.  And tonight turned out to be both the first night of Passover and Good Friday.  It seemed like a good idea to note that fact, especially since we will be performing in a Church.

So I whipped up a new poem for the occasion.

Brief Haggadah for Passover/Good Friday
For Social Gospel in Words and Music
April 6, 2012

The child always asks…
What makes this night different
from all other nights?

You have to think hard.

Somewhere children are always
being massacred for some
accident of birth
or for mere convenience sake.

Somewhere slaves are plotting their escape
and Pharaohs hitch their war chariots
to pursue them.

Somewhere fools dance
and lay fronds before the path
of a maybe Messiah on an ass.

What makes this night different?
Nothing, son, except that
you asked the right question.
Now, what are we going
to do about it?