Hey, ya’ know what inspires poets?  Beer, that’s what.  Preferably by the gallon and on somebody else’s tab.  That is, if the poets are men.  Women apparently think about other stuff, but the guys have their priorities straight.
I discovered this when I noted that Wikipedia lists National Beer Day as an American celebration held annually on April 7, marking the day that the Cullen–Harrison Act allowing the sale of beer up to 3.2% alcohol by weight to be sold in the United States for the first time since Prohibition went into effect.  The action was a quick fulfilment on one of Franklin D. Roosevelt’s top campaign promises.   By Decembe
r the Twenty-First Amendment to the Constitution was ratified America was wet again.
On further investigation I discovered that National Beer Day was only officially observed in the Commonwealth of Virginia thanks to another Democrat, Governor  Terry  McAuliffe.  But it is trending on social media--#NationalBeerDay and there is a groundswell of support for spreading the celebration. 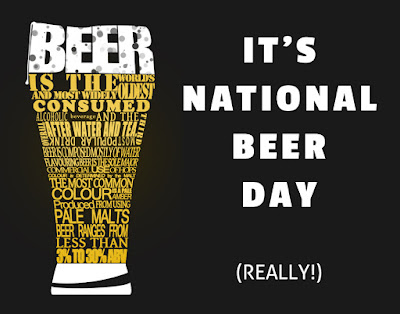 Now I don’t drink much beer anymore.  Just a bottle now and then with dinner out.  It’s not that I have reformed, it just that at my advanced age I can’t take the bloating from the carbonation and my old man’s plumbing problems make the consumption of large quantities of any liquid ill advised.  But back in the day, I drank the stuff by the four-quarts-of-Blatz-for-a-Dollar and the $2 saloon pitcher.  I passed many golden and convivial hours in dives with equally committee consumers.  There were decades when I was seldom photographed without a beer can in my hand at any and all family events.  These days I take my refreshments in hard liquor and moderation, but I have many fond memories.
So upon leaning of the celebration, I decided to Google “beer poems” on the offhand chance that I might get a National Poetry Month post out of it.  That’s when I hit the mother load.  There is lots of sudsy verse out there and not just by guys like your drunk Uncle Marvin.  I mean verse by real heavy hitters, the fellows they made your read in high school and even sometimes show up on Postage Stamps.
So without further ado, let’s take the Clydesdales out for a spin.

First a    bit of discrete advice from the noted French raconteur and roué Charles Baudelaire (1821-1867).
Get Drunk!

Always be drunk.
That’s it!
The great imperative!
In order not to feel
Time’s horrid fardel
bruise your shoulders,
grinding you into the earth,
Get drunk and stay that way.
On what?
On beer, poetry, virtue, whatever.
But get drunk.
And if you sometimes happen to wake up
on the porches of a palace,
in the green grass of a ditch,
in the dismal loneliness of your own room,
your drunkenness gone or disappearing,
ask the wind,
the wave,
the star,
the bird,
the clock,
ask everything that flees,
everything that groans
or rolls
or sings,
everything that speaks,
ask what time it is;
and the wind,
the wave,
the star,
the bird,
the clock
will answer you:
“Time to get drunk!
Don’t be martyred slaves of Time,
Get drunk!
Stay drunk!
On beer, virtue, poetry, whatever!”

Too high toned and Froggy for you?  Well listen to what the philosopher on the corner stool of a skid row dive, Charles Bukowski (1920-1994).

the female is durable
she lives seven and one half years longer
than the male, and she drinks very little beer
because she knows it’s bad for the figure.

well, there’s beer
sacks and sacks of empty beer bottles
and when you pick one up
the bottle fall through the wet bottom
of the paper sack
rolling
clanking
spilling gray wet ash
and stale beer,
or the sacks fall over at 4 a.m.
in the morning
making the only sound in your life.

beer
rivers and seas of beer
the radio singing love songs
as the phone remains silent
and the walls stand
straight up and down
and beer is all there is.

For those of you yearning for the spiritual,  I give you Jalal ad-Din Muhammad Rumi (1207-1273).  Hey, are Sufi mystics even supposed to drink?

All day I think about it, then at night I say it.
Where did I come from, and what am I supposed to be doing?
I have no idea.
My soul is from elsewhere, I’m sure of that,
And I intend to end up there.

This drunkenness began in some other tavern.
When I get back around to that place,
I’ll be completely sober. Meanwhile,
I’m like a bird from another continent, sitting in this aviary.
The day is coming when I fly off,
But who is it now in my ear who hears my voice?
Who says words with my mouth?

Who looks out with my eyes? What is the soul?
I cannot stop asking.
If I could taste one sip of an answer,
I could break out of this prison for drunks.
I didn’t come here of my own accord, and I can’t leave that way.
Whoever brought me here will have to take me home.

This poetry. I never know what I’m going to say.
I don’t plan it.
When I’m outside the saying of it, I get very quiet and rarely speak at all.

We have a huge barrel of beer, but no cups.
That’s fine with us. Every morning
We glow and in the evening we glow again.

They say there’s no future for us. They’re right.
Which is fine with us.

Of course our own Edgar Allen Poe  (1809-1849) new a thing or three about being in his cups and was economical in expressing it.
Lines on Ale
Fill with mingled cream and amber,
I will drain that glass again.
Such hilarious visions clamber
Through the chamber of my brain.
Quaintest thoughts, queerest fancies
Come to life and fade away.
What care I how time advances;
I am drinking ale today.
—Edgar Allen Poe

Across the Puddle the Brits do a tweedy homage,  Take A.E. Housman (1859-1936)  in his famous A Shropshire Lad.
Excerpted from Terence, This Is Stupid Stuff
Why, if ’tis dancing you would be,
There’s brisker pipes than poetry.
Say, for what were hop-yards meant,
Or why was Burton built on Trent?
Oh many a peer of England brews
Livelier liquor than the Muse,
And malt does more than Milton can
To justify God’s ways to man.
Ale, man, ale’s the stuff to drink
For fellows whom it hurts to think:
Look into the pewter pot
To see the world as the world’s not.
And faith, ’tis pleasant till ’tis past:
The mischief is that ’twill not last.
Oh I have been to Ludlow fair
And left my necktie God knows where,
And carried half way home, or near,
Pints and quarts of Ludlow beer:
Then the world seemed none so bad,
And I myself a sterling lad;
And down in lovely muck I’ve lain,
Happy till I woke again.
Then I saw the morning sky:
Heigho, the tale was all a lie;
The world, it was the old world yet,
I was I, my things were wet,
And nothing now remained to do
But begin the game anew.

Of course the Irish, proud and glib would never stand to be bested by and Englishman.  Stand Back!  William Butler Yeats (1865-1939) has the floor.

The Hour Before Dawn

A great lad with a beery face
Had tucked himself away beside
A ladle and a tub of beer,
And snored, no phantom by his look.
So with a laugh at his own fear
He crawled into that pleasant nook.
‘Night grows uneasy near the dawn
Till even I sleep light; but who
Has tired of his own company?
What one of Maeve’s nine brawling sons
Sick of his grave has wakened me?
But let him keep his grave for once
That I may find the sleep I have lost.’
What care I if you sleep or wake?
But I’ll have no man call me ghost.’
Say what you please, but from daybreak
I’ll sleep another century.’
And I will talk before I sleep
And drink before I talk.’
And he
Had dipped the wooden ladle deep
Into the sleeper’s tub of beer
Had not the sleeper started up.
Before you have dipped it in the beer
I dragged from Goban’s mountain-top
I’ll have assurance that you are able
To value beer; no half-legged fool
Shall dip his nose into my ladle
Merely for stumbling on this hole
In the bad hour before the dawn.’
Why beer is only beer.’

Finally, here is one by my old friend and Fellow Worker Carlos Cortez (1925-2009) with whom I passed many a joyful hour of conversation.  The Wobbly writer, editor, graffic artist, poet, and philosopher knew his topic well.  A fitting and final working class toast.

Sitting at this bar
Thinking of places
Afar
In my glass of beer
I see Thru the smoke filled haze
Of this room
like a crystal vision
Looms
A ribbon of cement
Black line down the middle
Perdition bent
like a galloping snake
On the make
Thru treeless prairies
And bottomless passes
Ever in motion
Over rnoonkissed desert
Toward golden California
Grasses
Stopped only
By a big blue ocean,
Man-----!
Give me the song
If you can
Of a
Greyhound motor’s
Tirade
Crawling along
Some old ten-mile grade
Where life can be complete
On a bumpy seat
Watching the great USA
And life itself passing
On its way
And all the while
I say to myself each gulp
of beer
Is costing me
Another mile