We Have Reckoned Our Dead—Poems for Workers’ Memorial Day

Today is Worker’s Memorial Day although unless you are a card carrying union member, you would hardly have noticed.  Only the labor movement seems to make much of a big deal about it.  In 1970, the AFL-CIO first declared April 28 Workers’ Memorial Day in honor the hundreds of thousands of working people killed and injured on the job every year. Following the passage of the Occupational Safety and Health Act by Congress that year, the Occupational Safety and Health Administration (OSHA) was formed and officially came into existence on this date in 1971.
The commemoration is annually made official in the United States by Presidential proclamation.  I didn’t check to see if the current Resident bothered to uphold the tradition or if he was too busy with compulsive tweeting, gutting the hard-won protections of OSHA, and plotting union busting with his billionaire pals.  If he did, his heart certainly wasn’t in it, or some staffer quietly slipped into his sign today pile while he was distracted by a squirrel or bad news on the investigation front.
The Day has gone international, first in Canada where it is now called Workers’ Day of Mourning and then across the world.  In Britain and much of Europe and Asia it is called International Commemoration Day (ICD) for Dead and Injured.  Since 2001 the International Labor Organization (ILO) and the United Nations have concurrently recognized April 28 as World Day for Safety and Health at Work.
Despite the improvements and reforms in industrialized countries brought about by militant labor actions and often reluctant government regulations, tens of thousands are still maimed, sickened, and killed on or by their jobs.   The current blank check being written to employers rescinding those regulations and the wink and nod that enforcement or punishment for violations of rules that remain on the books will not be vigorous, means that after decade of decline those grim figures will be on the rise again.
Meanwhile, in the Third World factories that churn out the West’s consumer goods, few if any protections are in place as witnessed by several horrible textile plant fires in India, Bangladesh, and South East Asia; factory collapses; and a continuing wave of suicides by the stressed out and overworked employees of Chinese industry.

If Worker’s Memorial Day has an official poem, it is We Have Fed You All For a Thousand Years, which first appeared in the Industrial Workers of the World (IWW) Industrial Union Bulletin in 1908 under the title The Cry of Toil and attributed to an Unknown Proletarian.   It was subsequently set to a stirring march by Rudolf von Liebich, identified as “of the General Recruiting Union, Chicago, and Composer of Music for the Working Class, and later included in Songs for the Workers, the IWW famous Little Red Songbook.  It was so popular that it was also issued as sheet music.  The song has been recorded many times and there is at least one alternative melody in use.  Wobbly bard Utah Philips reintroduced the song to new generations.
We Have Fed You All for a Thousand Years
We have fed you all, for a thousand years
And you hail us still unfed,
Though there’s never a dollar of all your wealth
But marks the worker’s dead.
We have yielded our best to give you rest
And you lie on crimson wool.
Then if blood be the price of all your wealth,
Good God! We have paid it in full.

There is never a mine blown skyward now
But we're buried alive for you.
There's never a wreck drifts shoreward now
But we are its ghastly crew.
Go reckon our dead by the forges red
And the factories where we spin.
If blood be the price of your cursed wealth
Good God! we have paid it in.

We have fed you all for a thousand years—
For that was our doom you know,
From the days when you chained us in your fields
To the strike of a week ago
You have taken our lives, and our babies and wives
And we're told it's your legal share;
But if blood be the price of your lawful wealth
Good God! we have bought it fair! 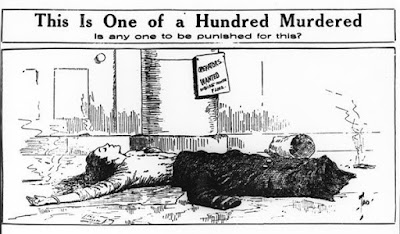 In the U.S. the event that sparked public outrage and led to the first tentative worker safety reforms in New York state was the 1911 Triangle Shirtwaist Factory Fire in New York City’s Greenwich Village that killed more than 146 workers, mostly young immigrant Italian and Jewish women.  Witnessed by hundreds and documented in gruesome photographs the images of the young women dropping to their deaths on the side walk from the upper stories of the factory or screaming from windows compelled a response.  Within four days of the tragedy the Jewish Daily Forward printed a poem by Morris Rosenfeld, known as the poet laureate of the slum and the sweatshop, down the full length of its front page.
Requiem: The Triangle Fire Victims in Verse
Neither battle nor fiendish pogrom
Fills this great city with sorrow;
No clouds darken, no cannon’s roar shatters the air.
Only hell’s fire engulfs these slave stalls
Nor does the earth shudder or lightning rend the heavens,
And Mammon devours our sons and daughters.
Wrapt in scarlet flames, they drop to death from his maw
And death receives them all.
Sisters mine, oh my sisters; brethren
Hear my sorrow:
See where the dead are hidden in dark corners,
Where life is choked from those who labor.
Oh, woe is me, and woe is to the world
On this Sabbath
When an avalanche of red blood and fire
Pours forth from the god of gold on high
As now my tears stream forth unceasingly.
Damned be the rich!
Damned be the system!
Damned be the world!
Over whom shall we weep first?
Over the burned ones?
Over those beyond recognition?
Over those who have been crippled?
Or driven senseless?
Or smashed?
I weep for them all.
Now let us light the holy candles
And mark the sorrow
Of Jewish masses in darkness and poverty.
This is our funeral,
These our graves,
Our children,
The beautiful, beautiful flowers destroyed,
Our lovely ones burned,
Their ashes buried under a mountain of caskets.
There will come a time
When your time will end, you golden princes. Meanwhile,
Let this haunt your consciences:
Let the burning building, our daughters in flame Be the nightmare that destroys your sleep,
The poison that embitters your lives,
The horror that kills your joy.
And in the midst of celebrations for your children,
May you be struck blind with fear over the Memory of this red avalanche
Until time erases you. 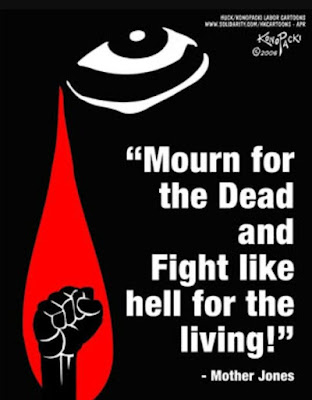 There have been books filled with poems commemorating mine disasters, train and ship wrecks and other wide spread disasters.  But most worker victims die by ones and twos in unspectacular accidents that barely merit an inch of newsprint or a twenty-second voice over of a video clip on the evening news.  More sicken and waste away out of sight from Black Lung, silicosis, exposure to agricultural pesticides and industrial poisons.  No one even measures those whose hearts give out from the stress of tyrannical bosses and speed-ups or those driven to suicide in despair.  Sue Walz created this poem for oral presentation at commemorations to remember them.

The Plan
A poem for two voices - female & male, dedicated to all workers
who have gone before us, and who we remember on Worker Memorial Day.

Email ThisBlogThis!Share to TwitterShare to FacebookShare to Pinterest
Labels: AFL-CIO, OSHA, Sue Waltz, Triangle Shirtwaist Fire, We Have Fed You All For a Thousand years, Workers' Day of Mourning, Workers' Memorial Day, World Day for Safety and Health at Work. ILO