Oklahoma! Inspires a Look at Poems of the Sooner State.

Tonight, my wife Kathy Brady-Murfin and I are taking in a 75th anniversary production of Oklahoma! at the Marriott Lincolnshire Theater.  If you are a theater geek you know that Rodgers and Hammerstein’s first collaboration opened on Broadway on March 31, 1941 and was a record-shattering hit.  It is revered as the first completely modern “book musical” seamlessly integrating songs and dance into a dramatic story line to advance the plot.  Based on a popular play, Green Grow the Lilacs by Lynn Riggs, cast aside the standard conventions of revue musicals, frothy farces in which everything stops for musical numbers that seem to come out of left field, and European style operettas.
I’ve seen productions before—it’s a tried and true staple of high school drama departments and community theater, but I am really looking forward to seeing a production at the Marriott where high productions values, excellent casting, and innovating staging in the round are given.
In honor of the occasion, I thought we would take a gander at poetry of and from the Sooner State.  By the way, you gotta love a state that embraces a nickname for the cheats and chiselers in the famous land rushes for claims on land freshly stolen from Native Americans.
Every Territory and aspiring state had its own self-appointed poet laureate.  In 1895 Oklahoma had Freeman E. Miller, Professor of English and literature at the Agricultural and Mechanical College of Oklahoma Territory.  That year he dedicated his book Oklahoma and Other Poems to the Hoosier poet James Whitcomb Riley.  Riley was immensely popular, but derided by the Eastern literary mafia.  Unfortunately, Miller did not display the virtues of his hero—the folksy charm, and easy loping memorable rhymes.  Instead he aped the pretentious high-flown poetic rhetoric of self-consciously literary 19th Century bards.  It makes for turgid reading and an excerpt is offered here for its historical curiosity. 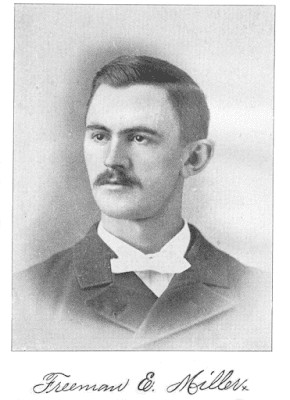 Behold! As from the shades of night,
An army gathers full of might,
And strong with constant courage stands
‘Tween civilized and savage lands,
Where, vast in power, the legion waits
The turning of the desert gates,
That men of might may enter in
And progress all her glories win!
Lo, where these thousands make assail,
The barren ages all shall fail,
And swift advancement far be hurled,
O’er sleeping empires and the world!

The morning hours haste hurried by;
Behold! The noon is drawing nigh!
The anxious host with careful eyes
Marks well each rapid hour that flies,
While hope, exulting, wildly rolls
The highest, such as filled the souls
Of Jason and his comrades bold,
Who sought the famous fleece of gold.
Upon the trampled grasses beat
Impatient steeds with restless feet;
The dins of harsh, discordant cries
Above the thrilling thousands rise;
Shrilly the scattered children call,
And soft the words of women fall,
While men with voices hushed and weak
Their low commands expectant speak;
Till suddenly a mighty cry,
A shout of warning, smites the sky:

‘Attention! Ho,
Attention here!
Attention! Lo,
The noon is near!”
O’er hill and brake
Resounds the warning cry;
The moment great is nigh;
The hosts awake;
Awake, to strive with mad delight,
Awake to win the friendly fight;
And from the camps anear and far,
Where nervous haste and hurry are,
Vast legions gather on the plain,
While chaos and confusion reign;
The neighing steed with quickened pace
Impatient seeks the vantage place;
The slower ox with lightened load
Stands waiting in the crowded road.
And wagon, buggy, carriage, cart,
Vehicles formed with rudest art,
All forward, forward, forward dart,
Swift-forming on the level ground
Where most advantage may be found….

—Freeman E. Miller
J. Quinn Brisben and I were more than nodding acquaintances back in Chicago.  We had several mutual friends—Fred W. Thompson, Carlos Cortez, Slim Brundage, Studs Terkel, Franklin Rosemont—and we saw each other at the College of Complexes and the socials where the left mingled in the 1960’s and ‘70’s.  I was a Wobbly and he was a leading member of the old Socialist Party.  As a matter of fact, he was their last candidate for President in 1992.  He was a memorable hulking bearded gentle giant of man.
Born in Enid, Oklahoma in 1934, his early childhood was shaped by the Dust Bowl.  Educated at the University of Oklahoma he was an active member of the NAACP as a student and continued to support the Civil Right movement including participation in the Mississippi Freedom Summer of 1964—where he was briefly jailed—and in several Southern Christian Leadership Conference-sponsored activities in Alabama from 1965 to 1967.  By that time Bisben and his wife Andrea were living in Chicago where he dedicated a more than thirty-year career to working in inner-city schools as a high school history and social studies teacher.  He was also an active leader in the Chicago Federation of Teachers and served on several strike committees.  He was active in the anti-Vietnam War movement, served as a boycott captain for the United Farm Workers, and later in life was an activist in the AIDs, LBGT, and disabled movements.   But he was also a gifted writer.  He published three collections of poetry including The Significance of the Frontier: Selected Poems 1966-2002, the novel V for Victory Blues, and a collection of short stories.  His stories and recollections were also included in four of Terkel’s classic oral histories.  Brisben died on April 17, 2012 at the age of 72.  Here are two short poems from The Significance of the Frontier.

Trees are not native to my native ground
Except thin growth that mark the banks of creeks
More surely than their phantom flow which leaks
So sluggishly that most months, past aching sound
Of dry winds rocking crooked cottonwoods.
Most useless trees, they must be soaked in pitch
To hold the raw barbed wire stretched tight and which
As posts still rot and crack.  Nice shade, though, hoods
That masked me often as I planned escape
From churches, dust, straight lines on prairies, scope-
Constricting worlds I did not know I held
Within me.  Fooled and happy, I went bold
Through fields like New Jerusalem revealed
To John on Patmos: bright, four-square, and gold.

A pure perfection cannot teach.  It takes
Some clumsy journeyman to show us how
To breath a life in things so we can show
Good ways to break the form and cook the cakes
Of art, astonish tastes, build sound that makes
The mind start up and blows the straining prow
Through waves resisting thought.  So let us now
Praise famous clods who made mind forming quakes:

—J. Quinn Brisben
Wayne Dodd was born in Clarita, Oklahoma in 1930.  He is currently a Distinguished Professor of English at Ohio University in Athens, Ohio.  He has published 11 books including poetry collections, essays, and scholarly articles.  He has been nominated for the Pulitzer Prize and the National Book Critics Circle Award for Poetry and has been a finalist for the American Academy of Poets’ Lenore Marshall Poetry Prize as well as receiving numerous other fellowships and other honors.
“Of His Life”
Beside the gravel pile, the lizard
warms himself in the dazzling greenness
of his life, watching us casually
through half-lidded eyes.
It is May.
Next week he would have been 57.
My daughter holds my hand, 3 years old
and ignorant, the airsickness forgotten,
and the hurried trip
and interrupted sleep.
Below the road
the whiteface cattle graze
in the morning peace.
The house is quiet.
Inside, his daughters stare unbelieving
into coffee cups, unable to imagine
the future.
My child throws some gravel
and the lizard fixes us
with both eyes, but does not
run, unwilling to leave
the warmth of the sun.
I can hear everything so clearly.
Years later she will ask
what he was like, her grandfather.
And I will try to remember
the greenness of this lizard,
he loved the sun so.

These days Oklahoma has the reputation of being the Reddest of States and regularly dispatches far right zealots and loons to Congress and has a state legislature that regularly makes news for outrageous and bizarre actions.  But it has not always been so.  Oklahoma was once a cradle of progressive populism and even radicalism.  Among its noted citizens were Will Rodgers.  Within memory it was represented in the Senate by progressive icon Frank Harris.  We have already noted Socialist Quinn Brisben.  And its most famous son was Woody Guthrie.
We don’t usually think of Woody as a poet, but as a song writer.  But over his life he filled dozens of notebooks and journals with lyrics, only a fraction of which he ever matched to music, either his original tunes or any of the folk melodies he cheerfully commandeered.  Some were published as poems in venues like his Woody Sez column in the Daily Worker and in anthologies and collections.  No survey of Oklahoma bards would be complete without him.
One such notebook gem made news recently, an ode to an odious slum lord and his racial red-lining.  You may recognize the name.
Old Man Trump
I suppose
Old Man Trump knows
Just how much
Racial Hate
he stirred up
In the bloodpot of human hearts
When he drawed
That color line
Here at his
Eighteen hundred family project.

—Woody Guthrie
But of course, Woody will ever be remembered best for his Dust Bowl Ballads.
Dust Storm Disaster
On the 14th day of April of 1935,
There struck the worst of dust storms that ever filled the sky.
You could see that dust storm comin’, the cloud looked deathlike black,
And through our mighty nation, it left a dreadful track.

The radio reported, we listened with alarm,
The wild and windy actions of this great mysterious storm;
From Albuquerque and Clovis, and all New Mexico,
They said it was the blackest that ever they had saw.

From old Dodge City, Kansas, the dust had rung their knell,
And a few more comrades sleeping on top of old Boot Hill.
From Denver, Colorado, they said it blew so strong,
They thought that they could hold out, but they didn't know how long.

Our relatives were huddled into their oil boom shacks,
And the children they was cryin’ as it whistled through the cracks.
And the family it was crowded into their little room,
They thought the world had ended, and they thought it was their doom.

The storm took place at sundown, it lasted through the night,
When we looked out next morning, we saw a terrible sight.
We saw outside our window where wheat fields they had grown
Was now a rippling ocean of dust the wind had blown.

Posted by Patrick Murfin at 3:52 PM