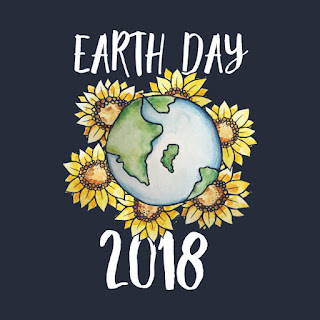 Today is Earth Day.  It seemed like a very big deal when it was introduced in 1970 when the Environmental Movement as we know it was still in its relative infancy having grown out the earlier Conservation Movement that emphasized the husbanding of natural resources for human use.  It seems in those early years when hundreds of thousands responded to calls to march or participate in some way that real change was possible.
And, of course, much was accomplished—the EPA and increased regulation of pollution, the hands-on movement to re-cycle and re-use, the on-going involvement of children which critics charge has now become a virtual secular religion.  But despite it all, the Planet is in more desperate shape today than it was then.  The Cassandra warnings about climate change have come true in spades, faster than anyone really expected.
Yet resistance to real change to address the root causes has never been fiercer—or more successful—as it is fueled by billionaire exploiters and exploited by rabid right wing movements.  If liberals love the Planet, conservatives MUST attack it wrapping themselves in an ideology of unfettered capitalism on one hand and apocalyptic Evangelical claims that the End of Days is at hand so humans can and should squeeze every ounce of value from the Earth that will be thrown away anyway on the other.
Meanwhile the Earth Day celebration has been tamed, made nice, worth all of five minutes mention on the Nightly News and some grade school art projects.  We are told that “we must not make it political, because everyone loves the Earth”—a lie on the face of it.
Last year that somnambulance was interrupted after the election of Donald Trump and it became quickly apparent that with the eager support of Congress and a largely now compliant appeals judiciary every gain in environmental protection was under urgent attack as was the very science behind the reforms.  Millions around the world responded by joining the March for Science on Earth Day, last year in demonstrations the rivaled in size the Women’s March and other mass take-to-the streets actions.

But this year with the total dismantlement of environmental regulation a reality, not just a fear, and the horrible consequences of unchecked human caused climate change more apparent than ever attempts to recreate the March for Science have stumbled.  Organizers changed the date this year from Earth Day to April 14 and although there were actions, they were far smaller than last year and marches and rallies passed virtually unnoticed in the press.  Independently some science marches were scheduled globally for Friday including some large demonstrations in Europe.  Other events are planned in this country this weekend.  But it is apparent that for whatever reason the energy has gone out of the movement.
There are just so many other outrages and causes to march for.  We get spread thin and worn out.  But poets remind us there is work to do.

Lachlan Mackinnon   was born in Aberdeen, Scotland in 1956. He was educated at Charterhouse and Christ Church, Oxford. He took early retirement from his job as an English instructor at Winchester College in 2011 and moved to Ely with his wife, the poet Wendy Cope. He has written five collections of poetry including Doves in 2017.
California Dreaming
Almonds and vines and lawns
drink up the last
of shallow, short-term water
then suck on the black depths
with a draw mightier
than the moon’s. And suck.
In sudden places the ground
puckers and caves.
Far westward, China smokes.
Nobody sees the rains fail
until they have.
Tableland mesas crack.
In the mountains the snowpack thins,
meltwater now brown
reluctant drops.
Cities gasp in the sun’s stare.
Faucets cough
and families turn inwards.
There must be somebody to blame.
Better ourselves than no-one.
We brag
of damage done
but whether we could truly
dry all rain, bake all earth,
science does not know.
The wastefulness was all
ours but this fetid heat
could be a planetary
impersonal adjustment
like an ice age,
so it might well be wise
to keep always
facepaint and ash about us.
When the last clouds
wagon-train off,
loincloth and invocation will be
the one hope for last
woman and last man discovering
she’s pregnant.

Amelia Williams is a prime example of a poet/artist/activist.  She has a Ph.D. in English from the University of Virginia and lives in the Shannon Farm Community, an intentional community—in the old days we would have called in a commune—in  Nelson County, Virginia.   The beautiful 500 acres owned in common by the people who live there found itself threatened by the construction of the Atlantic Coast Pipeline, a natural gas conduit planned to run from West Virginia to North Carolina.  In response she launched a project to protect the land by creating and installing 16 sculptural containers and assemblages that would integrate her writing with the landscape.  She had a documentary photographer take pictures of each piece, which she submitted as a collective eco-art trail for copyright registration with the U.S. Copyright Office.  The as yet untested idea is that the copyright protection could prevent the pipeline company from altering the landscape in which the installations are integral.  The whole project including the photographs and poems were included in Walking Wildwood Trail: Poems and Photographs, which benefits Friends of Nelson and Wild Virginia.

On the Cusp of the Known World:  A Field Guide

October mornings we wake to raspy buzz and jingle —
the Lesser Anglewing, Two-Spotted Tree Cricket,
Allard’s Ground Cricket, or is it? We stand on the deck
and press “play” again to hear a clear Midwestern voice
pronounce both names of a competing candidate
for this trilling in the grass: Say’s Trig, he intones,
Anaxipha exigua. When the effort to distinguish
overwhelms, we relish the names of our insect musicians:
the Slightly Musical Conehead, the Dog-day Cicada.
I feel we are on the cusp of something. A marriage
between cup and clasp. Two curves lean
into one another, stretch upward with a cautious
yearning, as if on tenterhooks, waiting
expectantly, with baited, but not bated breath, or maybe
just hung out to dry, the wet woolen smell
on the cusp between musky and rank.
The field guides agree it is hard to pin down
a goldenrod. We sort them into tribes by shape
plume-like, club-like, wand-like and elm-branched.
It can be hard to tell a wand from a club. Don’t forget
the flat-topped clusters. Asters, likewise, are tricky.
Leaves give clues: whorled, crooked, toothed or not,
grass-like, or perfoliate. In astonishing profusion
the tiny white asters are almost unknowable.
What are we on the verge of here?
It could just be me, stridulating,
hatching out of my skin of knowing, naming,
claiming; empty of easy kinship. Fall is
alive with the strangeness of yellow
flower, red berry, swift dark flying,
rattling upriver, not toeing the line
but towing it, pulling up stakes.

This year by semi-accident my Tree of Life Unitarian Universalist Congregation in McHenry, Illinois will hold its annual spring Flower Communion on Earth Day, despite the stubborn cold weather that has prevented all but the most hardy crocuses, snow lilies, and blue bells from blooming in our yards this year.  Even though we will have to bring store bought blooms, it seems an apt compliment to the ecological observation.
Flower Communion is a Unitarian Universalist tradition, one of the few original ones that we didn’t inherit from our more conventional Christian roots or simply rip off from somebody else’s tradition.
The Unitarian Universalist Association explains it thusly:
The Flower Ceremony, sometimes referred to as Flower Communion or Flower Festival, is an annual ritual that celebrates beauty, human uniqueness, diversity, and community.
Originally created in 1923 by Unitarian minister Norbert Capek of Prague, Czechoslovakia, the Flower Ceremony was introduced to the United States by Rev. Maya Capek, Norbert’s widow.  [Capek died in a Nazi concentration camp.]
In this ceremony, everyone in the congregation brings a flower. Each person places a flower on the altar or in a shared vase. The congregation and minister bless the flowers, and they’re redistributed. Each person brings home a different flower than the one they brought.
I have been participating in this tradition now for nearly than 30 years with this congregation through four name changes, five ministers called or interim, three intern ministers, and two buildings.  It is a highlight of the church year.
Two years ago as I watched it unfold again, I began to scratch note in my Order of Service.

Those Unitarians have a thing,
a ritual if you will—
yeah, I know, hard to imagine.

They call it Flower Communion
or if that gives the congregation hives
for sounding damned
you know, churchy and Christian,
the Flower Service—
like FTD delivery

But don’t worry,
you know the details are fuzzy
and it will be different everywhere
you know—
no Pope or Book of Common Prayer
to set the rules just so.

They can’t even agree on a date
though most of ‘em do it in the Spring
sometime around when,
if you’re lucky,
it has been warm long enough
to pluck some blossom
from your yard—
If you have one.

Where I have parked my ass
on Sunday mornings
these last several years,
Spring cheated us
unless you planted daffodils
or are unashamed
by a handful of dandelions.

The supermarket flower wagons
got a work out this year
I’m guessing
by the bright look
of the vases and baskets
on the table by the Chalice.
In some churches they try
For proper liturgy—
prayers or meditations
if they are queasy,
songs and blessings.

Folks file orderly
to lay their blooms in baskets
or fill lovely vases
and then some tidy system
is employed to deal them out again.

But at our place we defy order
and occasional attempts
to impose it—
the poseys are supposed
to go in the baskets
before the bell is rung.

But a lot of us are late
or left the bouquets in the car,
wander in
and add their nosegays
to haphazard piles
after things a have started.

The timid and confused
have to be called up
for last moment deposits.

Then the Children and the Youth
are beckoned from their seats
toddlers and teens
grab fistfuls and  plunge randomly
among the seats offering flowers
and bouncing off each other
like bumper cars
until everyone has a flower—
or three or four
and the kids can’t find
anymore takers.