Guns, Violence and the NRA Focus of Documentary at Tree of Life UU in McHenry 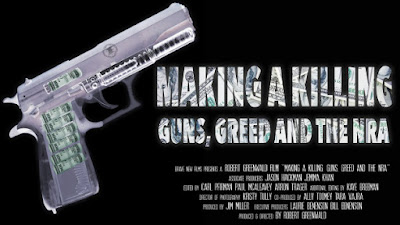 Making a Killing: Guns, Greed, and the NRA, a documentary film by Robert Greenwald, will be shown at the Tree of Life Unitarian Universalist Congregation, 5603 Bull Valley Road in McHenry on Friday, April 13 at 7pm.  A lively discussion will follow.
Making a Killing: Guns, Greed, and the NRA tells the stories of how guns, and the billions made off of them, affect the lives of everyday Americans. It features personal stories from people across the country who have been affected by gun violence, including survivors and victims’ families. The film exposes how the arms manufactures, merchants, and the National Rifle Association are resisting responsible legislation for the sake of profit.
The film looks into gun tragedies that include unintentional shootings, domestic violence, suicides, mass shootings, trafficking, and what we can do to put an end to this profit-driven crisis.

“The film is especially timely as for the first time in decades a serious and sustained challenge to the NRA stranglehold over any and all gun regulation in the wake of the mass shooting at Margery Stoneman Jackson High School in Parkland, Florida and the #NeverAgain Movement it sparked,” said Tree of Life Social Justice Co-Chair Judy Stettner.  “We especially invite everybody who attended the March for Our Lives events and all who had wanted to attend.”
The Tree of Life Social Justice Team sponsors this free movie night.
For more information call the church at 815 322-2464, e-mail  office@treeoflifeuu.org or visit https://treeoflifeuu.org/2018/04/09/movie-night-gun-violence/ .
Posted by Patrick Murfin at 10:00 AM