American as Apple Pie—Guns and Carnage

Last night at the Tree of Life Unitarian Universalist Congregation in McHenry, a small group gathered to watch Making a Killing: Guns, Greed, and the NRA, a documentary film by Robert Greenwald and Brave New Films.  It was an urgently compelling experience.  The film explored the epidemic of gun violence in America through the personal stories of survivors, victims, families, and shattered communities.
Included were stories of domestic violence, accidental death of children because of easy access to loaded guns in homes, the wave of street violence and crime in Chicago which has devastated the Black community, suicide, and a mass shooting—the 2012 movie theater massacre in Aurora, Colorado.  In each case modest and moderate steps that could prevent or greatly reduce those types of incidents—all well short of gun bans or the confiscation   that the gun lobby uses to whip up hysteria among gun owners.  And each reform was bitterly opposed by the National Rifle Association (NRA), the gun manufactures who funnel millions of dollars to the organization, and the politicians who are effectively bought and paid for by both.  All were blocked by the well-oiled machine despite heavy support each proposal had from the public and even from individual NRA members.
The proposed reform included closing the “gun show loop hole”  which allows “private gun sales” without background checks enabling known domestic abusers, criminals, and those with serious mental health issues easily obtain fire arms.  In the case of accidental home deaths even laws promoting trigger locks, safe storage, and newer high tech solutions to making sure a gun can only be fired by its owner were blocked.  Chicago’s sky high murder rate if held up by the Cheeto-in-Charge and the NRA as proof that the city’s tough gun laws do not work.  But despite the confiscation of thousands of illegal firearms annually, more guns pour into the hands of gang bangers, drug dealers, and criminals via a pipeline from lax gun law states like Mississippi, Indiana, and Wisconsin, as well as from those damn gun shows, and just three suburban gun shops.  In the case of often spur of the moment suicides, a simple three day waiting period has been shown to dramatically reduce self-inflicted gunshot deaths but remain bitterly contested in other states and on the national level.  And then there is the issue of military grade semi-automatic weapons, mega capacity magazines, and unlimited  amounts  of ammunition being freely available.
The film led to lively, engaged discussion and a shared commitment among those who attended to take concerted action to counter the NRA’s unbridled power in the streets and at the polls.
Poets have taken a lead in being voices against gun violence.
Brian Bilston is the nom de plume for the British secretive Poet Laureate of Twitter.  Many of his clever verses have gone viral but this one nearly melted down multiple the social media. 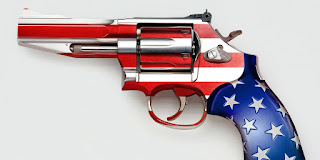 America is a Gun
England is a cup of tea.
France, a wheel of ripened brie.
Greece, a short, squat olive tree.
America is a gun.

Brazil is football on the sand.
Argentina, Maradona’s hand.
Germany, an oompah band.
America is a gun.

Holland is a wooden shoe.
Hungary, a goulash stew.
Australia, a kangaroo.
America is a gun.

Japan is a thermal spring.
Scotland is a highland fling.
Oh, better to be anything
than America as a gun.

Jericho Brown grew up in Shreveport, Louisiana, worked as a speechwriter for the mayor of New Orleans, and earned his PhD in literature and creative writing from the University of Houston.  The author of two acclaimed and award winning poetry collections, he is currently an associate professor of English and creative writing at Emory University in Atlanta, Georgia.
Another Ellegy
This is what our dying looks like.
You believe in the sun. I believe
I can’t love you. Always be closing,
Said our favorite professor before
He let the gun go off in his mouth.
I turned 29 the way any man turns
In his sleep, unaware of the earth
Moving beneath him, its plates in
Their places, a dated disagreement.
Let’s fight it out, baby. You have
Only so long left—a man turning
In his sleep—so I take a picture.
I won’t look at it, of course. It’s
His bad side, his Mr. Hyde, the hole
In a husband’s head, the O
Of his wife’s mouth. Every night,
I take a pill. Miss one, and I’m gone.
Miss two, and we’re through. Hotels
Bore me, unless I get a mountain view,
A room in which my cell won’t work,
And there’s nothing to do but see
The sun go down into the ground
That cradles us as any coffin can.

Jenna Harris is 15 years old and in 10th grade at Marjory Stoneman Douglas High School in Parkland, Florida.  She is one several survivors who have turned to gut-wrenching poetry to express her feelings—and her outrage.
None of This is Normal
I haven’t written about it yet
Maybe because writing was one of the things that felt
normal to me
But nothing about this feels normal

My heart is racing
My insides are aching
I’m angry
I’m sad
But I am grateful that I am alive
And hungry for change
And for my school, for my community I’m filled with so much
pride

None of this feels normal
But with a broken heart, I know all of this is true
And for each angel that was brutally ripped from us
Everything from now on is for you

I have written far too many poems inspired by the latest gun rampage.  The first came after a gunman armed with a shot gun  burst into a Knoxville Unitarian Church in the middle of a children’s performance of Annie almost 10 years ago now.  Yet the

They are about to sing about Tomorrow,
as fresh and delicate as impatiens in the dew,
when Yesterday, desperate and degraded
bursts through the doors
barking despair and death
from the business end of a sawed of shotgun.

Tomorrow will have to wait,
Yesterday—grievances and resentments,
a life full of missed what-ifs
and could-have-beens,
of blame firmly fixed on Them,
the very Them despised by
all the herald angel of perfect virtue—
has something to say.

Yesterday gives way to Now,
the eternal, inescapable Now,
flowing from muzzle flash
to shattered flesh,
the Now when things happen,
not the reflections of Yesterday
or the shadows of Tomorrow,
the Now that always Is.

Now unites them,
victims and perpetrator,
the innocent and the guilty,
the crimson Now.

Tomorrow there will be villain and martyrs,
Tomorrow always know about Yesterday,
will tell you all about it in certain detail.

And yet Tomorrow those dewy impatiens
will sing at last—
The sun will come out Tomorrow,
bet your bottom dollar on tomorrow
come what may…

How wise those little Flowers
To reunite us all in Sunshine.

Posted by Patrick Murfin at 7:34 AM