A Facebook post today reminded me why whatever current fashion has to say Carl Sandburg remains one of my three all-time favorite American poets and a personal inspiration.  He always set his own course rejecting the obscurism of fashionable modernism, high flown rhetoric, or classical allusions in favor of plain, blunt speech.
Without even dipping into a handful of poems from his first great book, Chicago Poems that have been so widely anthologized that they are familiar to folks who don’t read poetry, here is a sample of his vigorous verse which stand on their merits without further introductions. 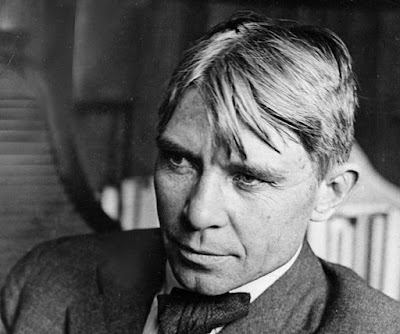 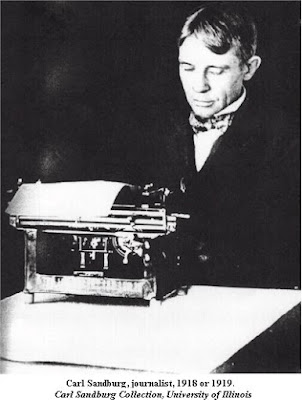 Play it across the table.
What if we steal this city blind?
If they want any thing let ‘em nail it down.

Harness bulls, dicks, front office men,
And the high goats up on the bench,
Ain’t they all in cahoots?
Ain’t it fifty-fifty all down the line,
Petemen, dips, boosters, stick-ups and guns—
what’s to hinder?

Nothin’ ever sticks to my fingers, nah, nah,
nothin’ like that,
But there ain’t no law we got to wear mittens—
huh—is there?
Mittens, that’s a good one—mittens!
There oughta be a law everybody wear mittens.
—Carl Sandburg
Masses

Among the mountains I wandered and saw blue haze and
red crag and was amazed;
On the beach where the long push under the endless tide
maneuvers, I stood silent;
Under the stars on the prairie watching the Dipper slant
over the horizon’s grass, I was full of thoughts.
Great men, pageants of war and labor, soldiers and workers,
mothers lifting their children—these all I
touched, and felt the solemn thrill of them.
And then one day I got a true look at the Poor, millions
of the Poor, patient and toiling; more patient than
crags, tides, and stars; innumerable, patient as the
darkness of night—and all broken, humble ruins of nations.
—Carl Sandburg
They Will Say

Of my city the worst that men will ever say is this:
You took little children away from the sun and the dew,
And the glimmers that played in the grass under the great sky,
And the reckless rain; you put them between walls
To work, broken and smothered, for bread and wages,
To eat dust in their throats and die empty-hearted
For a little handful of pay on a few Saturday nights.

New-mown hay smell and wind of the plain made her
a woman whose ribs had the power of the hills in
them and her hands were tough for work and there
was passion for life in her womb.
She and her man crossed the ocean and the years that
marked their faces saw them haggling with landlords
and grocers while six children played on the stones
and prowled in the garbage cans.
One child coughed its lungs away, two more have adenoids
and can neither talk nor run like their mother,
one is in jail, two have jobs in a box factory
And as they fold the pasteboard, they wonder what the
wishing is and the wistful glory in them that flutters
faintly when the glimmer of spring comes on
the air or the green of summer turns brown:
They do not know it is the new-mown hay smell calling
and the wind of the plain praying for them to come
back and take hold of life again with tough hands
and with passion.

Cross the hands over the breast here—so.
Straighten the legs a little more—so.
And call for the wagon to come and take her home.
Her mother will cry some and so will her sisters and
brothers.
But all of the others got down and they are safe and
this is the only one of the factory girls who
wasn't lucky in making the jump when the fire broke.
It is the hand of God and the lack of fire escapes.

I drank musty ale at the Illinois Athletic Club with
the millionaire manufacturer of Green River butter
one night
And his face had the shining light of an old-time Quaker,
he spoke of a beautiful daughter, and I knew he had
a peace and a happiness up his sleeve somewhere.
Then I heard Jim Kirch make a speech to the Advertising
Association on the trade resources of South America.
And the way he lighted a three-for-a-nickel stogie and
cocked it at an angle regardless of the manners of
our best people,
I knew he had a clutch on a real happiness even though
some of the reporters on his newspaper say he is
the living double of Jack London's Sea Wolf.
In the mayor's office the mayor himself told me he was
happy though it is a hard job to satisfy all the office-
seekers and eat all the dinners he is asked to eat.
Down in Gilpin Place, near Hull House, was a man with
his jaw wrapped for a bad toothache,
And he had it all over the butter millionaire, Jim Kirch
and the mayor when it came to happiness.
He is a maker of accordions and guitars and not only
makes them from start to finish, but plays them
after he makes them.
And he had a guitar of mahogany with a walnut bottom
he offered for seven dollars and a half if I wanted it,
And another just like it, only smaller, for six dollars,
though he never mentioned the price till I asked him,
And he stated the price in a sorry way, as though the
music and the make of an instrument count for a
million times more than the price in money.
I thought he had a real soul and knew a lot about God.
There was light in his eyes of one who has conquered
sorrow in so far as sorrow is conquerable or worth
conquering.
Anyway he is the only Chicago citizen I was jealous of
that day.
He played a dance they play in some parts of Italy
when the harvest of grapes is over and the wine
presses are ready for work.
—Carl Sandburg
Nigger

I am the nigger.
Singer of songs,
Dancer. . .
Softer than fluff of cotton. . .
Harder than dark earth
Roads beaten in the sun
By the bare feet of slaves. . .
Foam of teeth. . . breaking crash of laughter. . .
Red love of the blood of woman,
White love of the tumbling pickaninnies. . .
Lazy love of the banjo thrum. . .
Sweated and driven for the harvest-wage,
Loud laughter with hands like hams,
Fists toughened on the handles,
Smiling the slumber dreams of old jungles,
Crazy as the sun and dew and dripping, heaving life
of the jungle,
Brooding and muttering with memories of shackles:
I am the nigger.
Look at me.
I am the nigger.
—Carl Sandburg

Ten minutes now I have been looking at this.
I have gone by here before and wondered about it.
This is a bronze memorial of a famous general
Riding horseback with a flag and a sword and a revolver
on him.
I want to smash the whole thing into a pile of junk to be
hauled away to the scrap yard.
I put it straight to you,
After the farmer, the miner, the shop man, the factory
hand, the fireman and the teamster,
Have all been remembered with bronze memorials,
Shaping them on the job of getting all of us
Something to eat and something to wear,
When they stack a few silhouettes
Against the sky
Here in the park,
And show the real huskies that are doing the work of
the world, and feeding people instead of butchering them,
Then maybe I will stand here
And look easy at this general of the army holding a flag
in the air,
And riding like hell on horseback
Ready to kill anybody that gets in his way,
Ready to run the red blood and slush the bowels of men
all over the sweet new grass of the prairie.
—Carl Sandburg

Prayers After a World War

Wandering oversea dreamer,
Hunting and hoarse, Oh daughter and mother,
Oh daughter of ashes and mother of blood,
Child of the hair let down, and tears,
Child of the cross in the south
And the star in the north,
Keeper of Egypt and Russia and France,
Keeper of England and Poland and Spain,
Make us a song for to-morrow.
Make us one new dream, us who forget,
Out of the storm let us have one star.

Struggle, Oh anvils, and help her.
Weave with your wool. Oh winds and skies.
Let your iron and copper help,
Oh dirt of the old dark earth.

Wandering oversea singer,
Singing of ashes and blood,
Child of the scars of fire,
Make us one new dream, us who forget.
Out of the storm let us have one star.

I don’t know how he came,
shambling, dark, and strong.

They said: You for the fool killer, you for the booby hatch and a necktie party.

They hauled him into jail.
They sneered at him and spit on him,
And he wrecked their jails,
Singing, ‘God damn your jails,’
And when he was most in jail
Crummy among the crazy in the dark
Then he was most of all out of jail
Shambling, dark, and strong,
Always asking: Where did that blood come from?
They laid hands on him
And the fool killers had a laugh
And the necktie party was a go, by God.
They laid hands on him and he was a goner.
They hammered him to pieces and he stood up.
They buried him and he walked out of the grave, by God,
Asking again: Where did that blood come from?