Not Letting Up! Poems in Honor of the #NationalSchoolWalkout Today 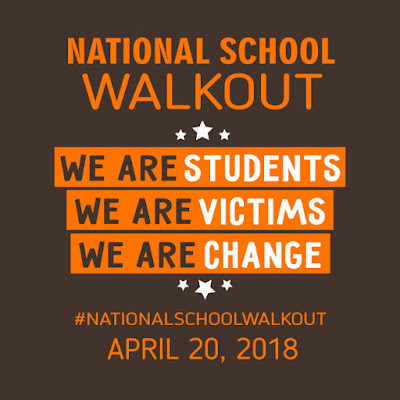 Today is the third of three major actions led by students address gun violence in the United States.  It follows the March 14 #Enough walk-out on the one-month anniversary of the mass shooting at Margery Stoneman Douglas High School in Parkland, Florida which was organized by students associated with the Women’s March and the March for Our Lives events sponsored by the survivors of the Florida shooting.  They have also endorsed today’s actions, #NationalSchoolWalkout .
Lane Murdock, a 16-year-old sophomore from Ridgefield, Connecticut, launched the National School Walkout.  She was disturbed by her own reaction—or lack of one—to the February massacre.

When I found out about the shooting at MSD, I remember I didn’t have a huge reaction. And because of that, I knew I needed to change myself, and we needed to change this country…Lane said.  We should be horrified, and we’re not anymore. It’s American culture.
Like the other actions, this one quickly went viral and hundreds of schools on all levels have signed up to participate, mostly with actions scheduled for 10 am local time.
At 10 students will walk out of their schools to observe a silence for the victims in Columbine, Parkland, and other atrocities.  After that programing will depend on local organizers but might include a rally with student speakers, marches to government offices and the offices of local lawmakers, and voter registration drives.  Unlike the March 14 action, students are encouraged to stay out of school if possible for the whole day and dedicate any additional time to “make calls to their Senators’ offices and flood social media with calls for reform.”
Here in McHenry County, Illinois the following schools have registered planned walk-outs on the event web page.

Other walk-outs may be in the works, but not publicly announced. 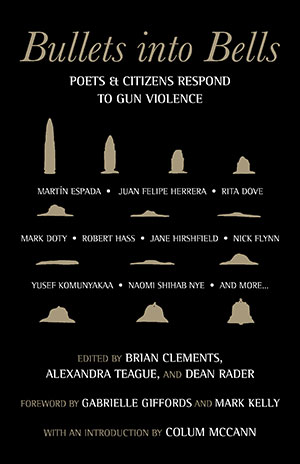 In honor of the Walkout today we are recommending  the Anthology Bullets into Bells:  Poets and Citizens Respond to Gun Violence edited by Brian Clements, Alexandra Teague, and Dean Radner with a forward by former Representative Gabrielle Giffords and her husband Mark Kelly for Beacon Books, Boston.
The following poems were not included in the book, but we submitted to the supporting website, https://bulletsintobells.com/ .  They are an extraordinary selection.


Emari DiGiorgio is the author of Girl Torpedo, winner of the 2017 Numinous Orison, Luminous Origin Literary Award, and The Things a Body Might Become.  She’s the recipient of the several poetry prizes and a poetry fellowship from the New Jersey State Council on the Arts. She teaches at Stockton University, and hosts World Above, a monthly reading series in Atlantic City, New Jersey.
What to Wear on the Day I Might Die
It might rile up the bull,
but any gypsy grandmother who worships the cornicello
knows red resists evil. Hidden beneath clothes
like a narc’s slim-fit Kevlar vest, or on the outside like a badge.
On the day I might die, I spurn sensible shoes.
I once sprinted eight long Manhattan blocks in boots
to catch the last Jersey-bound bus from Port Authority.
Chest heaving past Hoboken.
If the threat scrawled in the middle stall of the men’s room
is real, a pack of kids might pull semi-automatic assault rifles
from lacrosse bags at noon. A pipe bomb planted
in the decorative cabbages could detonate when I park.
But the reaper could be a god-loving high school flutist
who forgets the right of way, or my good heart might implode,
like the fit young quarterback’s from Kansas State.
How quickly the crowd moves to blame the coach, the game,
the parents. Consider the terror of the young boy from Tafalla,
who must’ve watched the bull struggle in the electric fence,
before it jumped from the arena to the stands, trampling him.
I’ve never wanted to be a bullfighter, but I imagine
I could stick the banderillas in the bull’s shoulder and neck.
Not out of ritual or performance, not for art, unless staying alive
is art. Which is what I’ll tell myself, crouched in a dumpster
as a trenched youth helicopters across campus.

Originally from Ireland, Sophie Segura has lived in Argentina for the past decade. her poetry has been published or is forthcoming in Irish print journals Banshee and The Well Review, and the online journal The Honest Ulsterman. She has also written (as Sophie Parker) for The Irish Times, Time Out Buenos Aires, and the Buenos Aires Herald.
Elevenses
We reckon, in heartbeats, the time it takes
paper to parachute-float through the drag.
The lull between bullets.
Nimble through pencil-case shrapnel, obstacle run
of flesh and metal. Dumb, sudden experts
at holding our breath.
Later, they’ll discover an underachieving bomb, erect
a metal detector, monument. We’ll try to ignore
invisible outlines on library carpet. And how
our sandwiches taste different.

“How Does This Compare with Other Mass Shootings?
—New York Times, June 12, 2016
On one hand, I hold the iPhone,
all news made small, and
on the other, your hand,
by which I also mean
the memory of your breath,
tracing my face
as morning opened around us.
How do I hold this world’s bullets
and the strands of sutured light
the blinds cast on your chest?
There are wounds that never close.
Bridges rebuilt in the wake of fire.
Everything is for sale.
Every day another app.
—Cintia Santana

Jen Karetnick is the author of seven poetry collections, including The Treasures That Prevail Her poems have appeared recently in numerous literary magazines and she is the co-founder/co-curator of the not-for-profit organization, SWWIM (Supporting Women Writers in Miami), and co-editor of the daily online literary journal, SWWIM Every Day.

How to Dis/Arm a Female Teacher

Don’t offer me the Chic Lady Handgun
with a barrel the color of bubblegum,
faux alligator case included
to carry with tests and term papers done,
nor the Ruger with recoil reduced,
semi-automatic, raspberry hued,
to be hung from a bra holster like fruit
until an active shooter has been cued.
Take away the Sig Sauer with Pearlite
grips, single-action slide and sleek night sights,
micro-compact to stash in my purse
(the Rhinestone Carry Gun Handbag by Ritz);
throw out that custom Remington Express
Shotgun, the stock of which I’m told to nurse
against my vested chest in the LimbSaver
Firearm Sling, both patterned in “Mossy
Oak Pink Camo,” the Rust Inhibitor
Rifle Gun Sock with which I can cover
the barrel—there’s no use that I accept
for any of these weapons, no matter
how couture. But the Gun Mug, I admit,
I will trigger if there’s no other choice.
Scalding coffee is the only bullet
I could ever bring myself to shoot.

—Jen Karetnick
Posted by Patrick Murfin at 2:00 AM