Triskaidekaphobia, Superstition, and Serendipity—Poetry of Luck Good and Bad 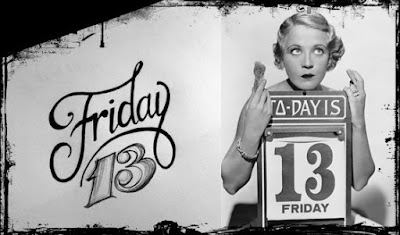 I have never been superstitious and have often been condescending to those who are—cue Stevie Wonder.  That is, of course, if you discount the two years in my boyhood when I carried a rabbit’s foot key chain in my jeans pockets until all the hair wore off and I was left with a weird mummified paw with surprisingly sharp nails.  But I outgrew that phase.  Later in my militant atheist literally piss-on-churches youth I lumped religion with superstition and went around muttering about mystric-tristic bullshit.  I rolled my eyes at my hippie friends who got into New Age crap—crystals and pyramids, Tarot, I Ching, an Ouija boards.
I try to be more tolerant now, but I still get the hives when I read that more Americans believe in angels and demons  than man-made climate change.  There are a lot of credulous folks out there who are apt to take what they seen on some History Channel hype and hokum as gospel truth.
Fear of Friday the 13th  is a classic superstition.  Most folks don’t know what is supposed to be unfortunate about the day, but the dread it anyway.  Some even think it’s about that slasher from fictional Crystal Lake.
Despite its wide-spread acknowledgement apparently considering the 13th day of the month falling on a Friday is not even that old of a tradition.  Apparently the Greeks and others regarded Fridays as unlucky because it was the day of the crucifixion.  Some numerologists considered 13 unfortunate both for convoluted mathematical reasons and because it was said that there were 13 present at the Last Supper on the 13th day of the Jewish month Nisan considered by Christians  as Maundy Thursday, the eve  of the crucifixion.    But these two dreads were not put together until the 19th Century.
Yet for whatever reason by the closing decades of the 1800s Friday the 13th was entrenched in popular culture.  The wide spread story that it was the date in 1307 that Philip IV of France arrested hundreds of the Knights Templar leading to their torture and execution was made up out of whole cloth in a popular novel and boosted more recently in Dan Brown’s idiotic thriller The Da Vinci Code.
And, of course, there were all of those dead teen-agers at that summer camp.
Anyway, today is Friday the 13th of April and we will honor the occasion with poems about that and other manifestations of luck, good and bad.
This intriguing poem was posted by a writer identified only as Ugo, then Columbia University Doctoral candidate on the web site Hello Poetry in 2012.
Stream: the 13th love song of Alfred Prufrock
The beauty of comatose can only be seen through
the eyes of a wizard in a blizzard
strutting in garlic slippers,

or Christ with knees bent at the tabernacle
peeling bananas and kicking prayers
farther than eternity with each gapping second,

or like Basquiat slumped back to the wall,
with ounces of speedball dancing through his veins,
eating 80’s free-based fried chicken cocaine

from heaven to Assassins on horsebacks goggling opium water
to wet the dry bones of their throats as they prepare to fulfill
the gospel of self-fulfilling prophecies of being fell by negro bullets.

Or like sophisticated wallets of spice and kitchen characters in a bald head
cooking chemical kisses and 18 February nights under Moloch’s skin,
where constitutions are written in charcoal diaries with Egyptian ciphers and razors.

“I had rain sowed into the pockets of my sneakers and composed 1310 eulogies
at the basement of king David’s tower,” said the Kraftwerkian caricature,
as he dangles cigarettes in remembrance of Klaus Nomi and philosophizes on the proliferation
of poetic vandalism at urinals where modernism failed under the phosphorescence of coloration at the avenue of no trees where Picasso’s “Guernica” Kill Lies All.

Rita Dove, one of our most popular contemporary poets considered the upside of luck, serendipity in this 1989 poem.
Happenstance
When you appeared it was as if
magnets cleared the air.
I had never seen that smile before
or your hair, flying silver. Someone
waving goodbye, she was silver, too.
Of course you didn’t see me.
I called softly so you could choose
not to answer—then called again.
You turned in the light, your eyes
seeking your name.
—Rita Dove
C.D. Wright was a prolific poet who served as the Poet Laureate of Rhode Island, and in 2013 was elected a Chancellor of the Academy of American Poets.  She died in 2016 at the age of 65.  In this poem she advised numerical precision, perhaps to the point of obsession.
Count your fingers
Count your fingers
Count your toes
Count your nose holes
Count your blessings
Count your stars (lucky or not)
Count your loose change
Count the cars at the crossing
Count the miles to the state line
Count the ticks you pulled off the dog
Count your calluses
Count your shells
Count the points on the antlers
Count the newjack’s keys
Count your cards; cut them again.

—C.D. Wright
The leading American Imagist on this side of the Atlantic, Amy Lowell was one of the extended New England Brahmin Lowell clan that was studded with generations of influential poets.  Ostracized for her weight and lesbianism and attacked by self-appointed Imagist pope Ezra Pound, Lowell none-the-less won a Pulitzer Prize and a wide readership.
Superstition
I have painted a picture of a ghost
Upon my kite,
And hung it on a tree.
Later, when I loose the string
And let it fly,
The people will cower
And hide their heads,
For fear of the God
Swimming in the clouds.

—Amy Lowell
Our final poet is more contemporary—Lynn Pedersen, Georgia writer whose collection The Nomenclature of Small Thing came out in 2016.  Like Lowell nearly a century before her, Peterson has a kite image up her sleeve.
The Birth of Superstition
It’s not hard to imagine: my ancestor—a dry season,
dust like chalk on her tongue—mixes
spit with clay,

traces a river on rock. Next day: rain.

Why shouldn’t she believe
in the power of rock and her own hand?

I carry this need for pattern and rule, to see connections
where there aren’t necessarily any.

After my first miscarriage,
I cut out soda, cold cuts.

After the second, vacuuming and air travel.

After the third—it’s chalk and spit again. I circle rocks,
swim the icy river.

And when my son is born, he balances
the chemical equation that is this world.

Logic is my son’s kite, good so long as you have
wind, string,
something heavier than hope

Posted by Patrick Murfin at 9:39 AM