Brown v. Board of Education—A Big Court Win that Took a Decade to Enforce 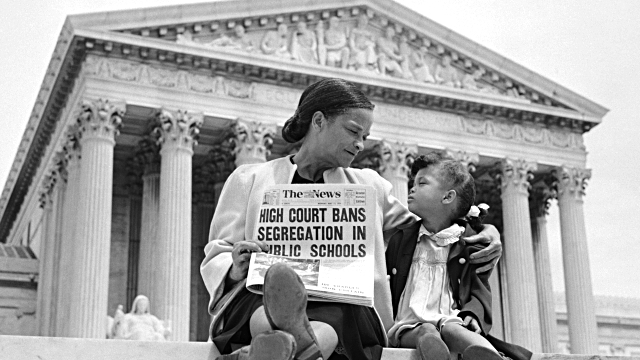 Barbara Brown and her mother in front of the Supreme Court building.

On May 17, 1954 a unanimous decision by the United States Supreme Court overturned legal precedent and established custom to rule in the case of Brown v. Board of Education of Topeka that “separate educational facilities are inherently unequal.”  The ruling sent shock waves across the nation, and it took more than a decade of turmoil and violence before this precedent was enforced across the land.

Before this ruling school segregation flourished not only in the Deep South but across much of the rest of the nation under the protection of the 1896 court decision in the case of Plessy v. Ferguson which ruled that “separate but equal” public accommodations were legal.

The Justices based the Brown decision on the post-Civil War Fourteenth Amendment to the Constitution which called for “equal protection under the law.”

Filed in 1951 by 13 parents, the suit was a result of segregation in the Topeka, Kansas school system under an 1873 state law that allowed—but did not compel—separation by race.  At the instigation of the local chapter of the National Association for the Advancement of Colored People (NAACP) the parents attempted to register their children at neighborhood schools reserved for whites.  The registrations were, of course, rejected.

The lead plaintiff was Oliver O. Brown, a welder with the Santa Fe Railroad and the associate pastor of a local church.  The Federal District Court upheld the law citing the Plessy case.  A three judge Appeals Court acknowledged that segregated facilities could be harmful to the interests of Black students, but said it was powerless to act because the Topeka schools were equal in terms of quality of facilities, transportation, curriculum, and quality of the staff.

At the Supreme Court level, the case was combined with four other NAACP test cases from Delaware, North Carolina, Virginia, and the District of Columbia.  In the Delaware case a lower court had supported the plaintiffs on the grounds that the segregated schools were manifestly unequal with Black schools housed in substandard buildings with restricted budgets that impacted education quality. 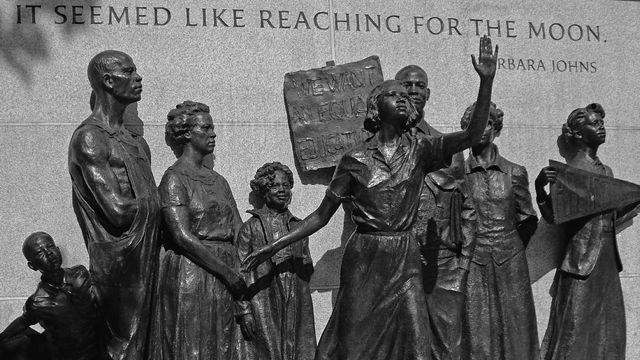 Although lead plaintiffs the Browns are best remembered, the case was consolidated with others from three states and the District of Columbia.  In Virginia 15-year old Barbara Rose Johns was deeply involved in all of the planning for her challenge to school segregation.  She is memorialized, center, in the Capitol Square Civil Rights Memorial in Richmond.


Arguing for the NAACP was Thurgood Marshal.  Defending the Board of Education, somewhat reluctantly—and some claim less than diligently—was Kansas Assistant Attorney General Paul Wilson.

According to notes, the Justices were split as the case moved forward.  Four members, William O. Douglas, Hugo Black, Harold Burton, and Sherman Minton were described as “predisposed” to overturn segregation.  Fred Vinton was leery to act in the absence of action by Congress to outlaw segregation.  Stanley Reed cited States’ Rights in opposition to Federal action and seemed to regard segregation as a positive benefit to Blacks.  Tom Clark wrote that, “we had led the states on to think segregation is OK and we should let them work it out.” Two of the most respected legal scholars on the Court, Felix Frankfurter and Robert H. Jackson were personally opposed to segregation but were skittish about “judicial activism.”

The makeup and temper of the Court changed dramatically as the case moved forward when Vinton died, and Earl Warren of California was appointed by President Dwight Eisenhower as the new Chief Justice.  Warren made a majority in favor of overturning the Kansas law. 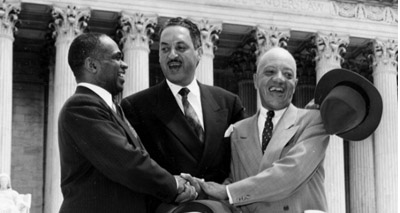 
Realizing the impact of the decision, the majority members spent a great deal of time bringing around their dubious colleagues.  They felt that anything less than a unanimous decision would result in years of doubt and instability.  One by one, they won over the doubters based largely on Marshall’s arguments.  In the end, they achieved a unanimous decision that left no doubt where the Court stood.

Topeka schools, which had only been segregated on the elementary level anyway, easily adapted without much in the way of opposition.  But across the South, the alarm was high, and the angry voices of defiance heard loudly. 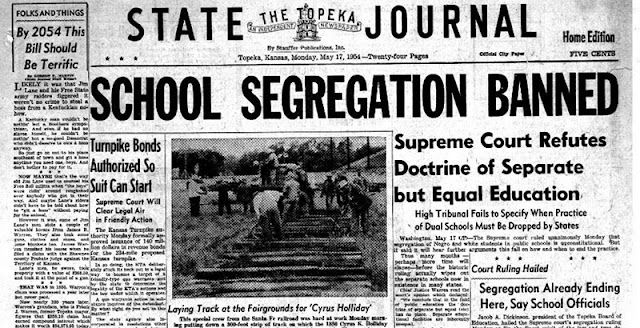 The decision made bold front page headlines not only in Topeka but in newspapers North and South.


Virginia Senator Harry F. Byrd, Sr. organized the Massive Resistance Movement across his state in which public schools shut down entirely rather than face integration.  In other states white fled the schools and established private academies.  With only Black and Whites too poor to afford the private schools left in the public system, they were starved of state and local tax funds.

In 1957 President Eisenhower had to mobilize the 101st Airborne Division to enforce the desegregation of Little Rock, Arkansas’s Central High School when Gov. Oval Faubus tried to use the state National Guard to block Black students.  As late as 1963 Alabama Governor George Wallace “stood in the door” of the University of Alabama to defend segregation.  He was moved aside by his own National Guard, which had been federalized by Lyndon Johnson. 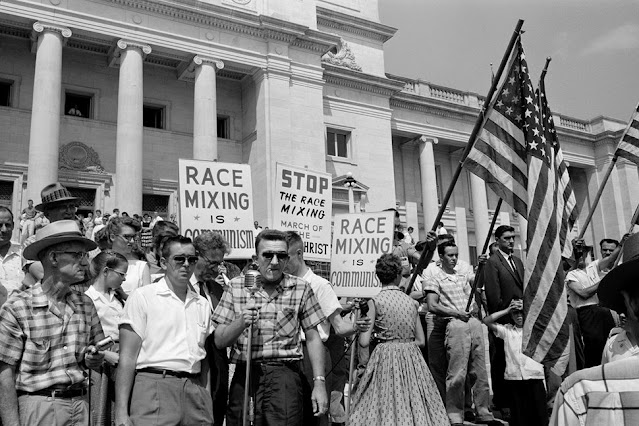 Not only was school integration bitterly opposed across the South for more than a decade, it was also fiercely protested in the North when it was applied to the de facto segregation created by discriminatory housing patterns.


Northerners who smugly assumed that all the brouhaha was isolated in the South were shocked when their own school systems were sued and desegregation orders, including “forced busing” was applied to them.  Boston saw ugly resistance through the ‘60’s into the early ‘70’s.

And a new generation of conservative judicial activists openly talks about reverting to the Plessy v. Ferguson standard.  Yet even the most hide bound conservative on the Supreme Court today would be hard pressed to overturn that unanimous 1954 decision.

Three cheers for judicial activism when it counted!