May Day and Me—Meetings and Marching 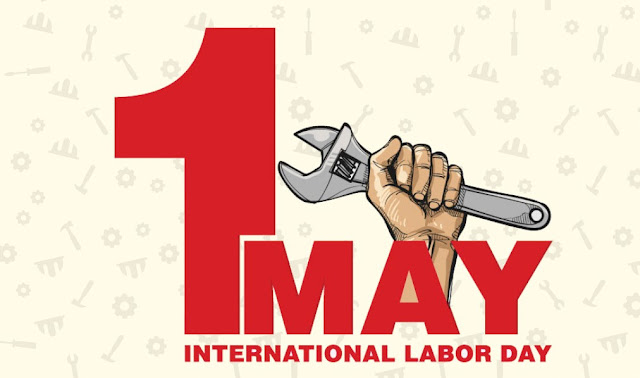 It May Day!  This year I will forego the detailed history of the day.  Those who have been around this joint for a while have seen it.  If not check this out.  Suffice it to say that this is officially celebrated as Labor Day in almost every country except the United States, where the whole thing began in commemoration of the of a Chicago eight hour day strike which led to a police attack on a protest rally on May 4 where a bomb was thrown, probably by an agent provocateur in 1886.  That led to the trial of eight labor leaders, mostly immigrant German anarchists.  Four were hung, one committed suicide in his jail cell during the trial, and the other four were sentenced to prison and were ultimately pardoned by Illinois Governor John Peter Altgeld.

Samuel Gompers proposed that the event be commemorated on May 1 at a meeting of the Socialist International in Paris.  Originally meant to be a one-and-done world-wide protest it was so successful that it became an annual celebration of Labor.  In Mexico it is still known as annual Día de los Mártires de Chicago.  By the 20th Century anarchists, socialists, and Communists all celebrated the day and labor unions adopted it.  Most countries observe it now as an official Labor holiday. 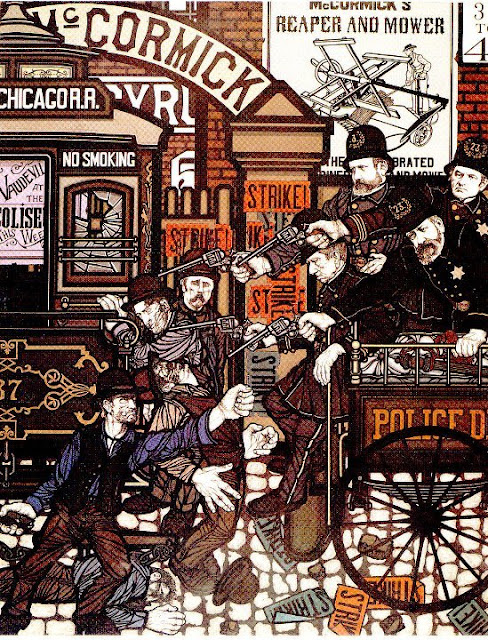 An attack by Chicago police on massed picketers at the McCormick Reaper plant on May 1, 1886 provoked a protest rally at the Haymarket on May 4.


Here in the States where a September date was picked to disassociate Labor Day from radicalism, militants continued to observe May Day anyway until the Red Scare repression after World War I and the McCarthy Era persecutions in post-World War II years into the 1950s.  Over the last decades both radicals and the mainstream Labor movement have revived commemorations, especially in Chicago.  And May Day has also become a major event for the immigration justice movement spreading from California to major marches across the country every year.  Often the Labor and immigration observances merge.

As an old Wobbly—member of the Industrial Workers of the World—May Day has been personal to me.  In 1970 or so Wobblies led a march from the empty pedestal of a monument to the police killed in 1886—the pedestal was empty because the statue kept getting bombed—carrying a life-size statue of Louis Ling, the youngest of the Haymarket defendants who blew his head off biting on a blasting cap, through the Loop.  We marched on sidewalks obeying traffic signals but the heavy police presence that accompanied us tied up downtown traffic for hours.

Four or five years later the IWW along with the Illinois Labor History Society and other groups held a Six Hour Day rally on the site of the speakers’ wagon in the Haymarket, the first celebration there in decades.  I ran off flyers on the printing press I operated at Diezgen Corp.  Studs Terkel acted as master of ceremonies, Win Stracke sang, and IWW Fellow Workers Fred W. Thompson and Carlos Cortez were featured speakers. 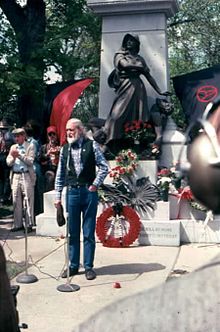 Utah Philips at the centennial ceremony at the Haymarket Martyrs memorial in Forest Home cemetery.


Other years I participated in the annual gatherings and wreath laying at the Haymarket Memorial in Forest Home Cemetery.  That included visits to the graves of the many labor leaders, anarchists, Socialist, and Communists who wanted to be interred nearby.  In 1986 Wobbly balladeer and storyteller Utah Philips was featured for the centennial of the Haymarket Affair,

After we moved to Crystal Lake in the mid-‘80s there were many years that I could not afford to take an unpaid day off to go down to Chicago or the cemetery unless May Day fell on a weekend.  But around 1990 I was invited to lead a May Day service at a small start-up Unitarian Universalist labor congregation that met at the UE (United Electrical Workers) hall.  Afterwards I visited the then newly erected Haymarket Monument on the site of the original speakers’ wagon.  The statue had been built and placed by the Chicago Federation of Labor, which was warming to its more radical roots, and had support of the City government. That somewhat blustery day, the Haymarket was virtually empty.  My wife and I missed a small ceremony held that year, but I proudly got my picture taken with the sculpture. 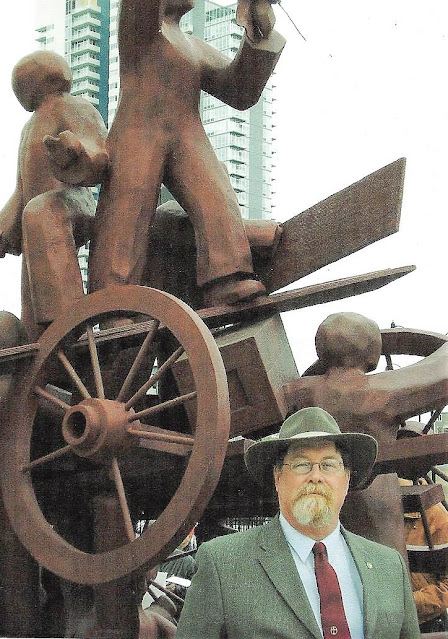 At the Haymarket Monument one May Day.


In 2017 I got down to Chicago for the largest May Day March in Chicago since the Great Depression.  One of the March co-sponsors, the Illinois Coalition for Immigrant and Refugee Rights, claimed 20,000 participants.  That seemed about right.  I came down with Sue Reckenthaler, then the Social Justice Chair of Tree of Life Unitarian Universalist Congregation.  There was a large, festive rally at Union Park west of the Loop followed by a long march to the Daley Center Plaza where another rally was being held.

Little did I know then that it would be the next-to-last long march I would ever be able to make. After my gallbladder tried to kill me which led to afib causing shortness of breath and then painful deterioration of a knee, I can barely make two laps around Woodstock Square where I marched last year as part of our Coalition to Cancel the ICE Contract in McHenry County campaign. 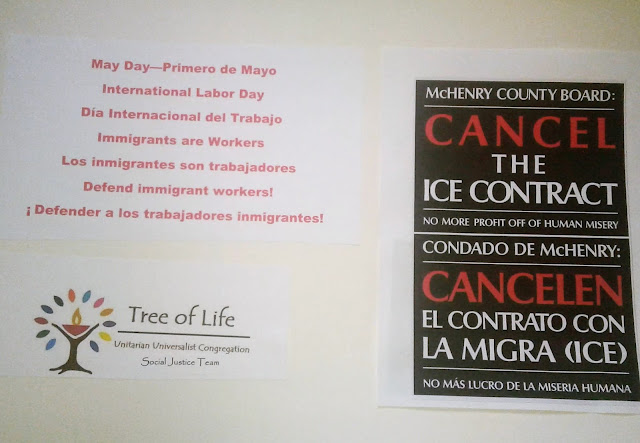 The placard I carried last year and a rally and march around Woodstock Square.


This year May Day is a Sunday and Tree of Life will combine elements of U.U. Flower Communion, the traditional ritual Spring observations including a May Pole dance with social justice nods the revived labor movement.  I won’t be able to frolic around the May Pole, but I will be decked out in my traditional red and black.  I won’t be able to make it to Chicago for the annual immigration/labor march, to wreath laying at the Martyrs monument, or to a May Day birthday party for Mother Jones at the Irish American Cultural Center. 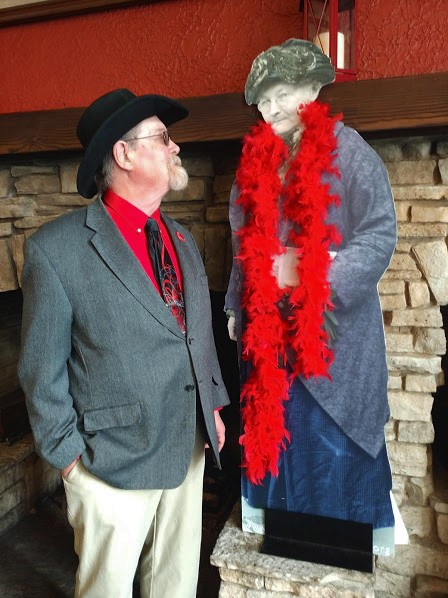 With Mother Jones for a May Day birthday celebration at the Irish American Cultural center.


Instead, the Murfin clan will gather in Crystal Lake to observe May birthdays, early Mother’s Day, and play time together for great-granddaughter Sienna and granddaughter Matilda.  I will probably sing The Internationale and Solidarity Forever anyway.

Back at my last Chicago march in 2017 I channeled my inner Carl Sandberg to answer those progressives who approved of immigrant rights marches on May First but clucked their tongues and wrung their hands that militant leftists would “damage the cause” by showing up at demonstrations with red or black flags and a chip on their shoulder. 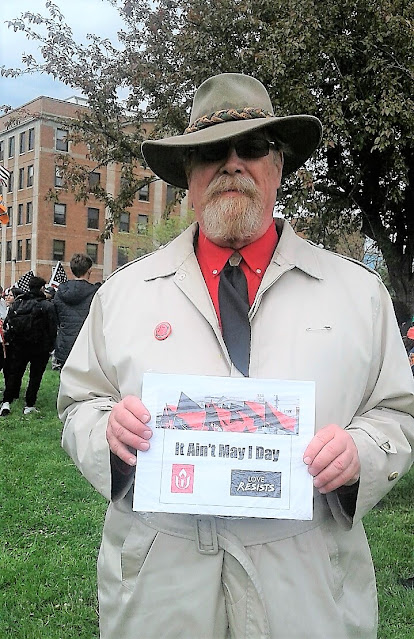 It’s get the hell out of our way

get your paws off of her

all hands on deck

we and us and ours