Decoration Day or Memorial Day It’s all About the Fallen 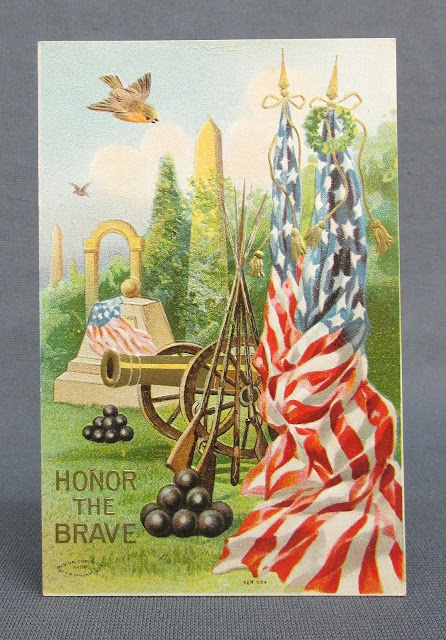 Note—This is a semi-regular Memorial Day history post.  It’s good to be reminded.

Today is, of course, Memorial Day in the United States.  The Uniform Holiday Act, passed in 1968, set 1971 as the year the Federal government would begin observing the holiday on the last Monday of May giving Americans a three day holiday weekend to start the summer season, to be balanced by a three day Labor Day weekend in September.

Veteran’s groups were nearly unanimous in opposition to the move fearing that it would dilute the observance as families planed fun activities instead of solemnly commemorating the war dead.  Several states refused at first to change their observances in conformity with the Federal law creating two Memorial Day holidays.   That proved unworkable and eventually all fell in line.

Of course, the veterans groups were right.  Attendance at their parades and cemetery services dropped off in favor of barbeque parties or a day at the beach.  Every year attempts are made to restore the traditional date, May 30.

The origins of that celebration go back to the end of the Civil War.   Almost as soon as the firing stopped communities were gathering to honor their dead, which in the sentimental 19th Century naturally meant trekking out to local cemeteries to festoon the graves with flowers.  Some credit the first organized commemoration to Confederate widows.

Former slaves mass to salute the Stars and Stripes at the dedication of the cemetery they built for the Union soldiers who died in a Confederate prisoner of war camp on May 1, 1865.

Others claim that former slaves in Charleston, South Carolina originated it when they reburied Union soldiers who died in a Confederate prisoner of war camp there and dedicated the cemetery they created as a Union graveyard.  A local paper said that up to 10,000 people, mostly former slaves, were present for a dedication of the graveyard on May 1, 1865 marking the occasion with singing and prayers.

Local observances sprang up in towns and cities both North and South.  Waterloo, New York lays claim to the first Decoration Day, as it became known with an observance on May 5, 1865.  It was surely not the first, and just one of many.  But the friendship of the local leader of the celebration, General John Murray with General John A. Logan, the Commander-in-Chief of the Grand Army of the Republic (G.A.R) planted the idea of creating a national observance.  On May 5, 1868 Logan issued G.A.R. General Order No. 11 instructing local posts to participate: 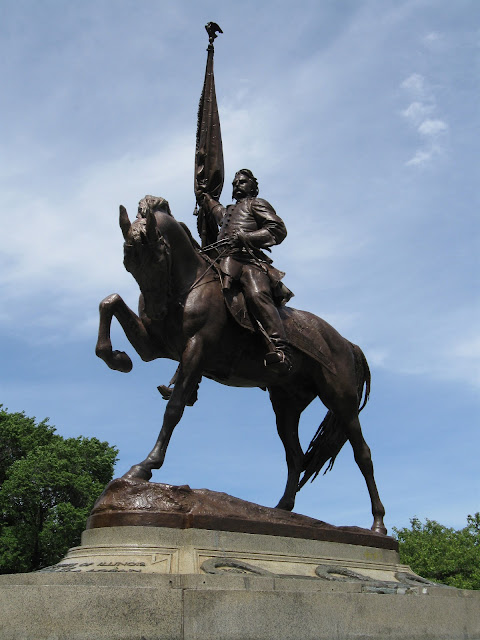 General John Logan, Commander of the Grand Army of the Republic is heroically remembered in this hill top Grant Park monument in Chicago.

The 30th day of May, 1868, is designated for the purpose of strewing with flowers or otherwise decorating the graves of comrades who died in defense of their country during the late rebellion, and whose bodies now lie in almost every city, village, and hamlet church-yard in the land. In this observance no form of ceremony is prescribed, but posts and comrades will in their own way arrange such fitting services and testimonials of respect as circumstances may permit.

We are organized, comrades, as our regulations tell us, for the purpose among other things, "of preserving and strengthening those kind and fraternal feelings which have bound together the soldiers, sailors, and marines who united to suppress the late rebellion." What can aid more to assure this result than cherishing tenderly the memory of our heroic dead, who made their breasts a barricade between our country and its foes? Their soldier lives were the reveille of freedom to a race in chains, and their deaths the tattoo of rebellious tyranny in arms. We should guard their graves with sacred vigilance. All that the consecrated wealth and taste of the nation can add to their adornment and security is but a fitting tribute to the memory of her slain defenders. Let no wanton foot tread rudely on such hallowed grounds. Let pleasant paths invite the coming and going of reverent visitors and fond mourners. Let no vandalism of avarice or neglect, no ravages of time testify to the present or to the coming generations that we have forgotten as a people the cost of a free and undivided republic.

If other eyes grow dull, other hands slack, and other hearts cold in the solemn trust, ours shall keep it well as long as the light and warmth of life remain to us.

Let us, then, at the time appointed gather around their sacred remains and garland the passionless mounds above them with the choicest flowers of spring-time; let us raise above them the dear old flag they saved from dishonor; let us in this solemn presence renew our pledges to aid and assist those whom they have left among us a sacred charge upon a nation's gratitude, the soldier's and sailor's widow and orphan.

It is the purpose of the Commander-in-Chief to inaugurate this observance with the hope that it will be kept up from year to year, while a survivor of the war remains to honor the memory of his departed comrades. He earnestly desires the public press to lend its friendly aid in bringing to the notice of comrades in all parts of the country in time for simultaneous compliance therewith…

To this day, Logan’s order is often read at Memorial Day observances conducted by the American Legion, Veterans of Foreign Wars, and other veterans organizations.

Decoration Day was soon observed across the North, and at Union cemeteries in the South.  For many years it was confined to the Yankee dead and was thus boycotted by Southern states, most of which designated their own separate memorial days for the Confederate Dead.  It was not until after the Spanish American War in 1898 in which Southerners served in arms under the Stars and Stripes once again, that the notion began to spread of honoring all the war dead—although this was fought tooth and nail by the GAR.  The South began to share the May 30th date but tended to call their observances Memorial Days to differentiate them from the GAR’s Decoration Days.

After World War I it became common to include the dead of that war—and later all wars—in the commemorations and the use of the term Memorial Day became more common even in the North.  But it was not Until 1967 the Congress officially changed the name.

Moina Belle Michael started the tradition of selling poppies to support war refugees even before the entrance of the United States into World War I.  Later adopted by veterans groups not only from the US but the United Kingdom, Canada, and other Commonwealth countries.

In 1915 Georgian Moina Belle Michael, inspired by the poem In Flanders Fields by John McCrae conceived of the idea of making and selling paper flowers for the support of maimed soldiers.  When the U.S. entered the war in 1917 she began selling her poppies on Decoration Day to honor the dead of all wars.  She later donated proceeds to French and Belgian war orphans.  The poppy tradition spread to other Allied countries.  After the relief organization she had been donating to disbanded after the War, Michel approached the Veterans of Foreign Wars, who adopted Memorial Day poppy sales in 1922.  Two years later they inaugurated their annual Buddy Poppy sales.  Soon no respectable American would be seen on the streets on Memorial Day without a Poppy.

These days the tradition of decorating soldier’s graves is kept alive by Boy Scouts, Girl Scouts, and veteran’s organizations who place small flags on the graves of veterans, not only at National Cemeteries, but in local graveyards as well.  Many cities and towns still hold parades, General Logan’s Order is read, prayers are uttered, politicians orate, high school bands play patriotic music, and sometimes straggling lines of elderly veterans fire volleys from rifles salute of the flag. 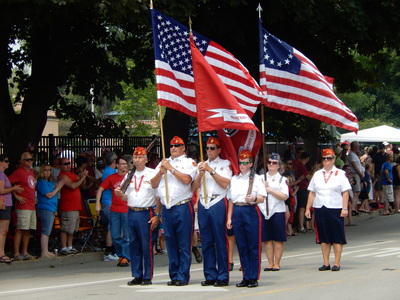 A pre-Coronavius pandemic Color Guard at a Crystal Lake, Illinois Memorial Day parade about to enter Union Cemetery for the annual ceremony at the city's Civil War monument.  The full parade and ceremony is back on this year and we will be taking two year old granddaughter Matilda just as I used to bring her mother and her sisters.

That’s the way it will be in my town, Crystal Lake, Illinois.

Posted by Patrick Murfin at 4:34 AM