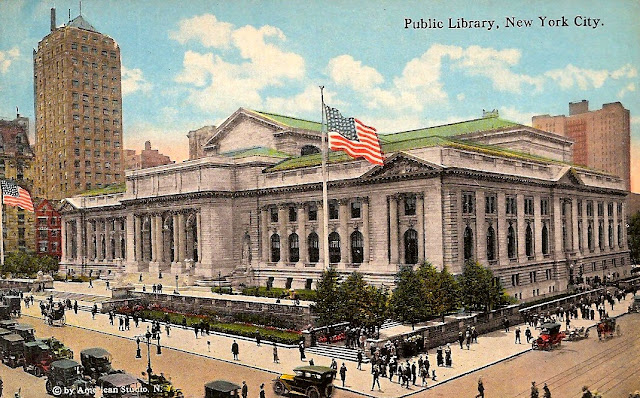 There may be taller buildings.  There may even be more beautiful buildings. There are certainly more profitable uses for prime Manhattan real estate.  But maybe no building in New York City is more justifiably admired and beloved than the Main Branch of the New York Public Library which opened its doors for the first time on this date in 1911 at 5th Avenue and 42nd Street.

It was recently named the Stephen A. Schwarzman Building in honor of the billionaire banker who pledged $100 million to restoration and repair of the structure.  It hardly put a dent in his personal fortune.  Schwarzman made headlines in 2012 when he compared President Barack Obama’s proposal to raise taxes to “Hitler’s invasion of Poland.”  Luckily, no one outside his immediate family and his billionaire buddy former Mayor Michael Bloomberg ever uses that name for the iconic building.

Several smaller libraries were consolidated into a new city institution in the late 19th Century. Big gifts from a bequest by former Governor and Democratic Presidential Candidate Samuel J. Tilden and from library patron and steel magnate Andrew Carnegie made possible the erection of an imposing building.

A rough design of the building was developed by the System’s first Superintendent, Dr. John Shaw Billings.  His vision was the basis for a well-publicized competition among the top architects in the country.  A relatively little known firm, Carrère and Hastings, won for its Beaux-Arts design. 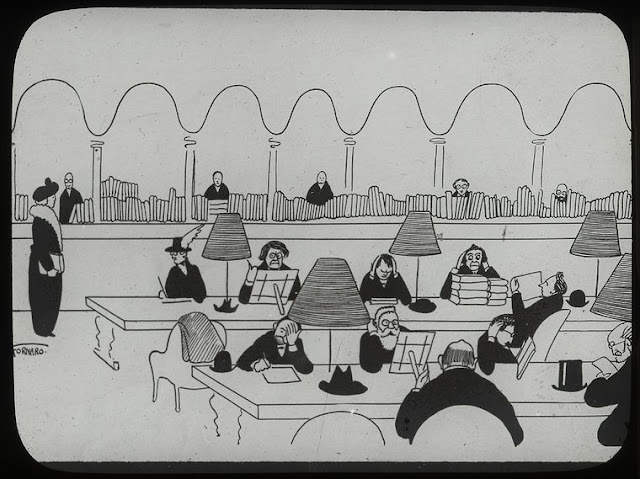 In this 1920's cartoon famous writers are depicted using the Reading Room.  The most recognizable is James Joyce with the dramatic wing on his hat.

Construction began in 1897 and the cornerstone laid in 1902.  It was the largest marble building ever constructed in the United States with walls three feet thick.  It cost a hefty $9 million when that was an almost unimaginable sum.  It took 14 years for master craftsmen, many of them European trained masons, to complete the building.  It took more than a year just to move in and shelve on miles of bookcases from the collections of the consolidated libraries. 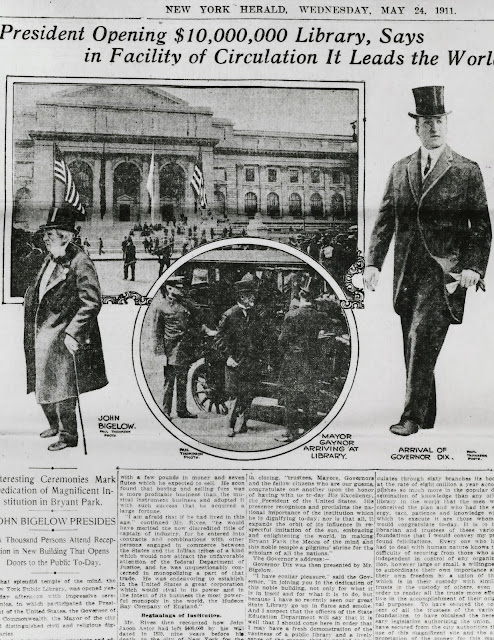 
The library was not only immediately one of the largest in the world, but it was also noted for an efficient system to produce volumes from the vast stacks and deliver them into the hands of patrons within moments.  The first book checked out, a scholarly study of the ethical works of Friedrich Nietzsche and Leo Tolstoy in German was in the hands of the library patron in just 11 minutes.

The most famous feature of the library is the grand and vast Rose Main Reading Room.  Walls are lined with reference books, two rows of large tables accommodate readers, researchers, and students and the room is appointed with crystal chandeliers, brass lamps, and comfortable chairs.  On sunny days the room is flooded with light from a row of large arched windows.  The room has been featured in movies, described in novels, and memorialized in poems by the likes of E. B. White and Lawrence Ferlinghetti. 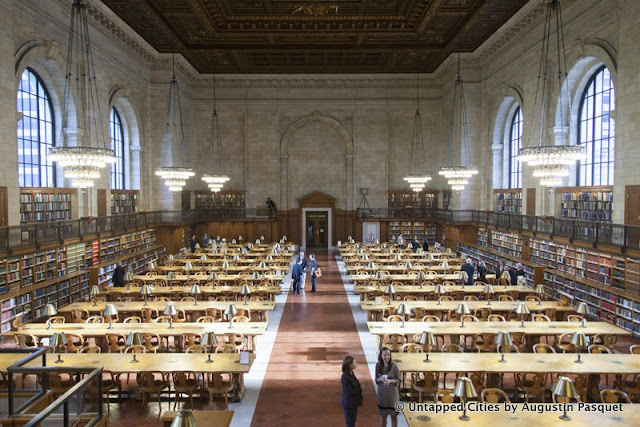 The Main Reading Room of the Library is an impressive public space with the reverence of a Temple.

Almost as famous are the two proud lions which flank the wide stairs to the main entrance.  Original named, Leo Astor and Leo Lenox in honor of two of the library’s principal founders, Mayor Fiorello La Guardia dubbed them Patience and Fortitude during the Great Depression when the great reading rooms were filled with the out-of-work passing the time away in self-improvement and when some of the homeless reportedly found ways to sleep in the stacks. 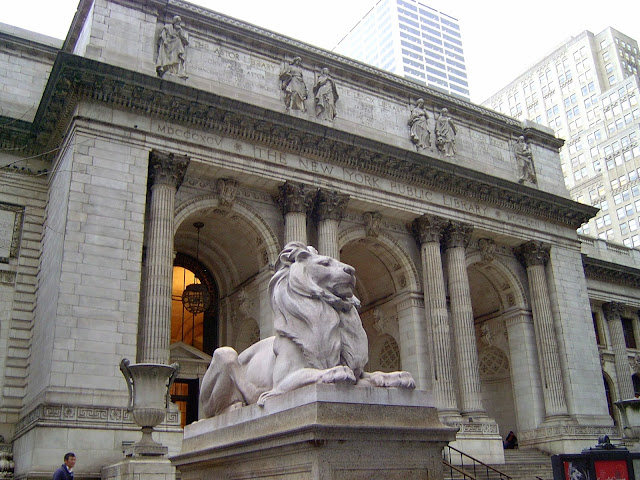 One of the Library's famed pair of guardian lions.

It took until the 1970 for continual acquisitions to fill up the generous space that had been included in the original designs.  In the 1980’s the building was expanded by 125,000 square feet and literally miles of new shelf space by constructing an underground addition below Bryant Park.

Work began in 2007 to clean and restore the begrimed and damaged exterior of the building and remodeling continued inside.  More work with Schwarzman’s—and other donors—money continues to be done.

Meanwhile former Mayor Bloomberg slashed the operating budget of the Library, closed many branches, and reduced hours open to the public.  Money for staff and new acquisitions was cut to the bone.

The grand and beloved edifice is in danger of rotting from the inside by neglect.

Posted by Patrick Murfin at 7:32 AM