Charles Elmer Hires and The Roots of Root Beer 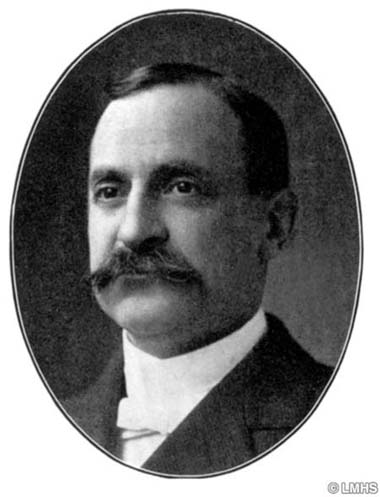 Note—The blog is back.  I have still not been able to restore my Facebook but now have over 150 friends on my new page—about 10% of my old one—and still have not been able to get in several of the interest groups where I routinely posted links to entries.  If you are a fan of this hodge-podge you can help by sharing links widely and inviting me to join groups where you have seen posts before.  Thanks for the sympathy, encouragement, and support many have lent me and this little pop stand at the far end of the cul de sac.

Root beer is fading fast.  Once one of America’s favorite soft drinks it is in danger of joining other 19th Century concoctions in obscurity.  Sarsaparilla has already virtually disappeared except for Western theme parks and roadside tourist attractions.  Ginger ale survives mostly as a cocktail mixer.  Cream Soda, both clear and tawny, lingers in some isolated regional niches.  Sure, you can still get root beer in bottles and cans at the local store and fill an enormous cup at a gas station/convenience store pop machine, but it has been largely eclipsed by ubiquitous colas, super sweet sodas, and more recently iced teas and energy drinks.  The soda fountains and root beer stand drive-ins that once fueled its popularity have virtually vanished.

The once popular beverage originated with Charles Elmer Hires, a Philadelphia Quaker druggist on May 16, 1866 according to several sources.  But that year Hires, who was born in 1851, was only 15 years old and while he was working as a clerk in a local drug store, had not yet opened his own shop and certainly was not on a honeymoon in New Jersey where, according to the tale, he was inspired by the female proprietor of the hotel who served a hot drink she called root tea.

The information on the inspiration may, or may not, be accurate, but the date is clearly wrong, yet persists across multiple sources.  Hires was an enterprising youngster, however and raised the money to open his own store before he was 20 by the sale fuller’s earth—a pharmacy staple—he obtained, you should excuse the expression, dirt cheap from the potter’s clay dug up in the excavation of foundations near his employer’s shop.  He married shortly after and was soon marketing an early version of his invention around 1871.

No surprise there.  Pharmacists concocted most of the classic American soft drinks in the post-Civil War era and peddled them as miraculous health elixirs.  They took off because they tasted better than most patent medicine and did not have the high alcohol content of those bottled remedies.  In fact, Hires, like other druggists, was a teetotaler and Temperance advocate who promoted his beverage as a booze alternative.  Most druggists also continued to make money on the high proof patent medicines which they could piously claim as medically beneficial.  It was the best of both worlds and for several decades made the local drug store one of the most lucrative of Main Street businesses—and a social center. 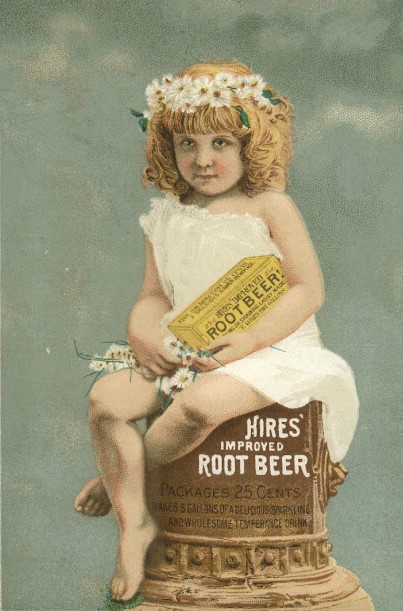 An early ad for Hires' Root Beer--for just a quarter the box could make 5 gallons of root beer at home when mixed with water, sugar and yeast.


The root in his root tea inspiration was sassafras, long regarded as having medicinal benefits.   He was soon selling his more concentrated powdered version in packages for home use.  Water, sugar, and yeast need to be added.  But you could still not buy a glass in his shop.

It wasn’t until 1875 that he began to market a syrup to other pharmacies, some of whom had opened the latest fad—the soda fountain.  These were the first to mix soda water and sell it by the glass. 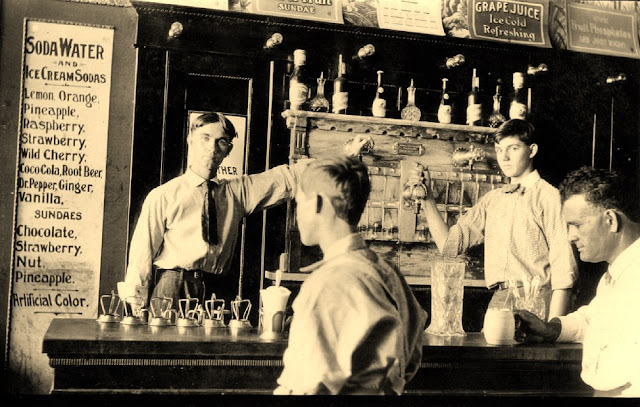 A classic drug store soda fountain circa 1890.  They were already using paper cone cup inserts.  The young man ad boy were not yet called soda jerks or wearing iconic white paper caps--both of those arrived with the Jazz Age 1920's and by then the charging fountain had been moved below the counter with beer-tap like lever handles on the bar.  Fountains grew from three or four stools to as many as twenty in large urban drug stores.


The next year the 1876 Centennial Exposition in his own hometown, Philadelphia, represented a golden marketing opportunity to expand his business.  Somewhat reluctantly he was persuaded by the Reverend Dr. Russell Conwell, a prominent temperance leader, to open up a refreshment kiosk at the fair where he sold “the temperance drink and the greatest health-giving beverage in the world.” He was also now selling his product as root beer, not root tea.  Fellow temperance advocates had convinced him that the name would attract hard drinking Pennsylvania working men and offer them an alternative to the stuff from breweries.  When heavily charged with soda, the drink even raised a lager-like head of foam to complete the illusion.

Needless to say, the exposure from the fair helped Hires’ product take off and he was soon shipping his extract syrup far beyond the City of Brotherly Love just in time for the explosion of popularity of soda fountains. 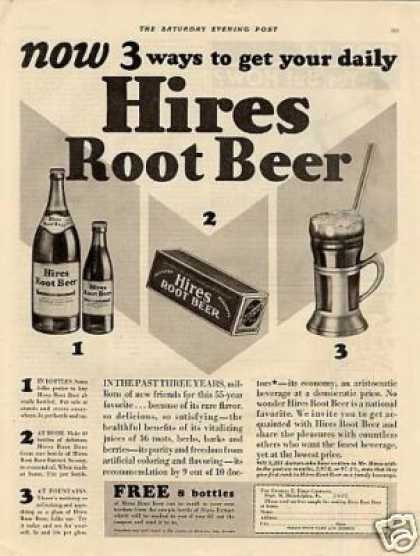 As late as the 1920's Hires was still marketing his root beer in the home mix box along side of bottled and soda fountain versions.


In 1886 Hires followed the lead of other pharmacy-created soft drinks like Coca-Cola and Dr. Pepper and began to sell a bottled version of his root beer for home consumption.  By the turn of the 20th century, his bottled root beer was sold nationally and was featured at many soda fountains.

Naturally, other manufactures entered the fray with their own creations, some of them mildly alcoholic—usually less than 2% or about the same as near beer. Most, like Hires, used a sassafras base but one early competitor, Barq’s, which was founded in 1898, employed sarsaparilla instead with a variety of other flavoring herbs and spices. 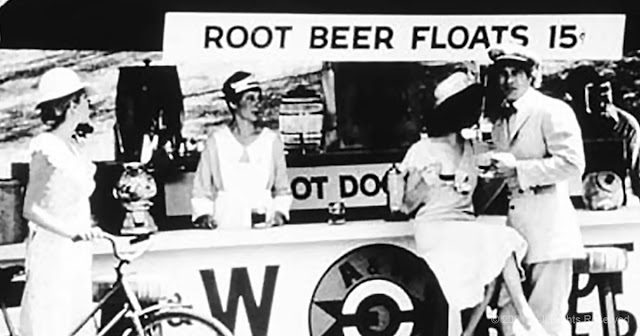 
In 1919, just in time for both Prohibition and the triumph of the automobile, Roy Allen opened a root beer stand in Lodi, California, which led to the development of A&W Root Beer.  Aside from roadside service convenience, A&W’s big innovation was serving its signature drink in frosted glass mugs.  This was soon copied by most soda fountains and by upstart competitors like the Midwest’s iconic Dog n Suds carhop served drive-ins of the 1950’s.

Prohibition did indeed spread the popularity of root beer, just as it did for most carbonated soft drinks.  The Depression somewhat nicked sales, and many adults returned to guzzling the real stuff, but the popularity of the drink with children and teens still made it a good business.


In the ‘50’s and ‘60’s root beer held its cultural niche.  It was the proclaimed favorite of Dennis the Menace in both comics and on the TV sitcom.  And every year on Veteran’s Day in Peanuts Snoopy in his World War I Ace outfit would “head over to Bill Malden’s for a root beer quaff.”

How successful root beer was as a deterrent to alcohol is open to question.  It was my beverage of choice as the kid growing up in Cheyenne, but the attraction was that it looked so much like real beer in those frosty mugs with the head of foam.  I felt grown up drinking them, pretending it was real beer.  It turned out to be a training beverage and no deterrent at all. 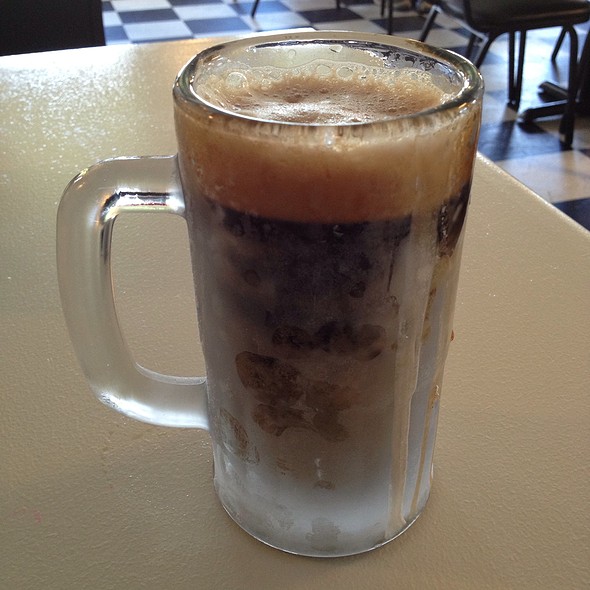 
But the soda fountains and drive-ins are the stuff of mere nostalgia now.  Try finding a frosty mug of root beer.  And it just ain’t the same in a foam cup over chipped ice.