The Day of the Golden Spike Connected America

On May 10, 1869 the United States was bound together as never before when the final Golden Spike was driven at Promontory Point in Utah connecting the Union Pacific Railroad (U.P) from the East with the Central Pacific (C.P.) from California. Together the two railroads formed the first Transcontinental rail connection.

Construction was spurred by the Civil War and the Union’s need to connect to California and its gold wealth to help finance the war.  The construction was authorized and encouraged by the Railroad Acts of 1862 and 1864 which provided financing for the enormously expensive undertaking through 30 year bonds and extensive land grants to the railroad companies along their rights of way.

Competition was encouraged by tying the land grants to track actually laid.  The Central Pacific got started first in 1863 heading east out of Sacramento and employed thousands of Chinese emigrants as “Coolie” labor for most of the grueling and dangerous pick-and-shovel work.  The western railroad was challenged by the daunting Sierra Nevada Mountains.  Workers had to construct steep mountain-side grades and switchbacks and bore long tunnels through hard rock.  Unstable nitro-glycerin was used for blasting resulting in many deaths and horrible injuries.  Naturally progress on the west end was slow. 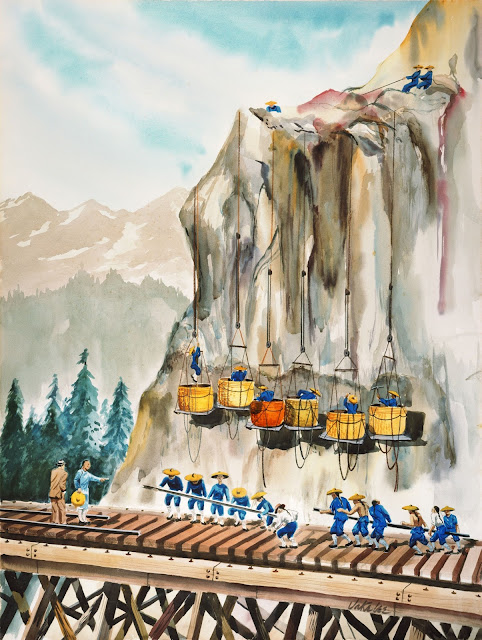 This 1950 watercolor by Jack Lee captures some of the arduous conditions faced by Chinese laborer for the Central Pacific trying to get through the Sierra Nevadas.


Construction on the Union Pacific ironically was held up by manpower and material shortages due to the war.  It did not start in earnest until the war was over.  The railroad was under the control of Thomas Clark Durant, a crook and charlatan with good political connections—he had hired Illinois lawyer Abraham Lincoln for some lucrative pre-war railroad business.

In point of fact, Omaha, across the Missouri River from the official terminus at Council Bluffs, Iowa was the actual jumping off point because no bridge was yet built across the river. In two and a half years since 1863 construction had only gotten 40 miles west of the river as Durant ate up daily government subsidies, directed the line on an illogical course to connect with his land speculations, and built numerous useless “ox-bows” to gobble up more grant land.

In addition, he contracted with Crédit Mobilier, a construction company he secretly owned, and skimmed profits all the while bribing members of Congress to look the other way.  All of that would blow up into an enormous scandal in the next decade. 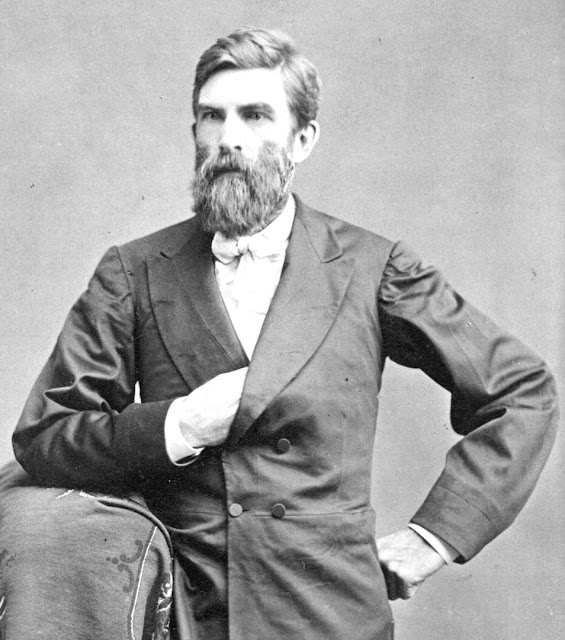 General Grenville Dodge was marginally less corrupt than Thomas Clark Durant and the competent, efficient, ruthless construction boss on the UP.


In the meantime, the likelihood of at least some direct Federal oversight of the project caused a new beginning in July 1869 with Durant’s war time collaborator in a scheme to deal in contraband Confederate cotton, General Grenville Dodge, in charge.  At least Dodge proved to be a competent manager.  The line started driving west, rapidly laying track over the open plains of Nebraska.

The eastern crews were largely Irish emigrant “navies” and rootless veterans of both the Union and Confederate armies.  They were a volatile bunch.  Often paid in script that could only be redeemed at the end-of-track towns known collectively as Hell on Wheels, they drank up their earnings and brawled incessantly.  They were also apt to stage numerous impromptu strikes and job actions.  Still, crossing such relatively good ground they were gobbling up miles—and enriching the U.P.’s land grants at an astonishing rate. 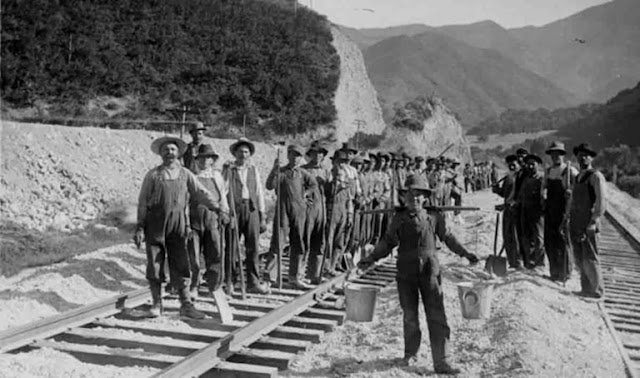 
Accompanying, and working slightly ahead of both lines, were the telegraph wires that hummed with construction business.  Communications in the gap between the two railroads and their telegraphs was the job of the short-lived Pony Express.

The U.P. began encountering harassment and attacks by Native Americans who recognized that the line was a threat to their way of life.  Numerous attacks somewhat slowed construction, which required U.S. Army protection. 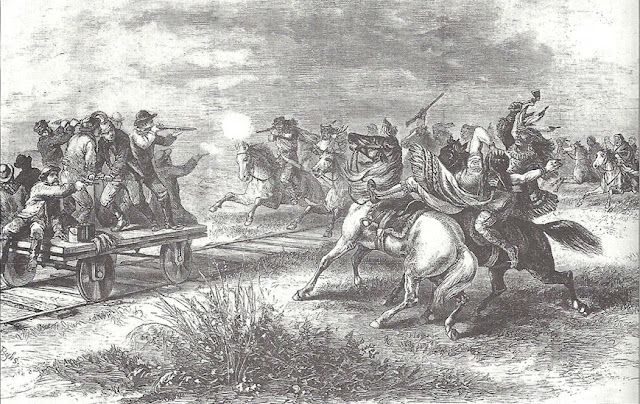 Native Americans recognized the threat to their way of life by the railroad.  They also were outraged that construction violated the promises made in the Treaty of Fort Laramie which ended Red Cloud's war in 1868.  While Sioux, Arapaho, Northern Cheyenne, and allied tribes sometimes attacked construction camps and trains, they usually tried to harass isolated work gangs like this crew trying to escape on a hand car.


The vast buffalo herds roaming the land also presented a threat to construction—and an endless supply of cheap meat for the laborers.  The railroad employed hunters like William F. Cody (Buffalo Bill) and James Butler Hickok (Wild Bill) to slaughter the animals by the thousands starting the eradication of the great herds that would be almost complete within a decade.

Meanwhile, the C.P finally broke through the mountains and into the high desert of Nevada and was able to launch its own race to the east.  Unfortunately for the C.P. the lands it was earning were not much suitable for sale or settlement—although they would later yield a wealth of minerals.

When the U.P. entered Utah, Brigham Young contracted hundreds of Mormon laborers to the railroad.  These tea-totaling workers disciplined by their own church leaders ended much of the labor turmoil on the line.

It was determined to run the line north of The Great Salt Lake rather than try to cross that shallow body by trestle.  The route missed the Mormon capital of Salt Lake City, but Young was cut in for rights to build a feeder line. 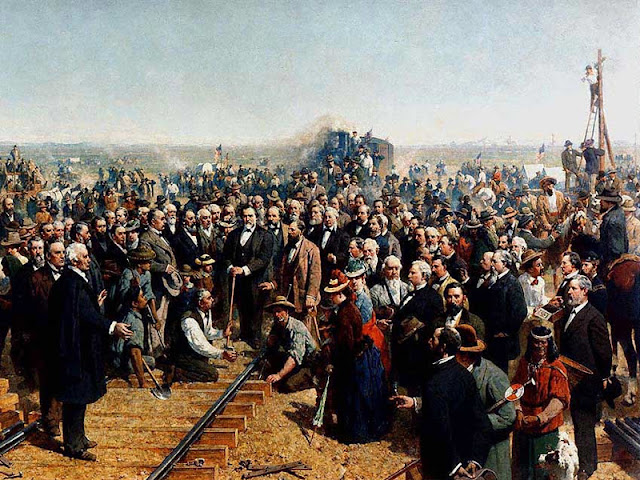 
California Governor Leland Stanford, himself one of the Big Four investors in the C.P., came for the ceremonial joining.  Dodge and a host of Eastern politicians were also on hand.  Stanford was given the privilege of driving the final Golden Spike, which was wired to a telegraph line to send a signal across the nation that the job was complete.

Overnight traveling time between Omaha and California by wagon was cut from six to eight grueling, dangerous months to six days in an uncomfortable but relatively safe railroad passenger car. The train could also accommodate all the household goods, farm equipment, stock, and supplies that were often destroyed, abandoned, or used up on the long wagon trek.  And suddenly news from San Francisco could reach London and all the European capitals via Western Union and the Transatlantic Cable virtually instantaneously.

Despite the linkage, final connections on both ends to make for continuous rail service from coast-to-coast were not complete.  It wasn’t until November that the C.P. completed its link west from Sacramento to Alameda on the shores of San Francisco Bay.  And passengers and freight cars still had to be ferried over the Missouri River until Durant finally got around to building a bridge in 1872.

By the time the last spike was driven, construction had begun on southern and northern transcontinental lines and on numerous feeder and connector lines.  Just twenty one years after the completion of the line, West was largely settled and the Census Bureau officially declared an end to the American Frontier. 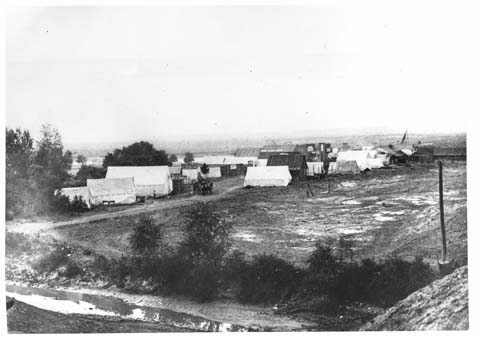 The end-of-track town and Hell on Wheels camp at what became Cheyenne, Wyoming which became a major U.P. division point with round house maintenance shops and humping yards to make up trains to cross the Continental Divide.


On a personal note, my hometown of Cheyenne, Wyoming began as just another Hell on Wheels.  Its location about halfway between Omaha and the Great Salt Lake made it the ideal spot for a U.P. division point, and for major maintenance shops and humping yards to make up trains to cross the mountains.  Located due north of Denver, which had been bypassed, it was also the natural location for a feeder line which eventually became part of the Burlington Northern system.  The Cheyenne of my youth was always a railroad town—a U.P. town—and knew it.

Posted by Patrick Murfin at 4:57 AM