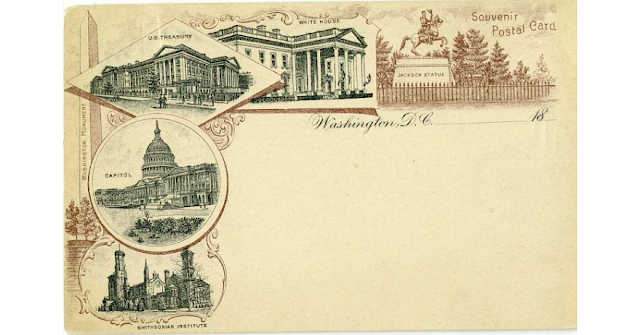 Over the vigorous objections of the United States Post Office on May 19, 1898 Congress passed the Private Mailing Card Act allowing private printing companies to produce postcards.

Privately printed cards first appeared in 1861 under an earlier act and the first card bearing images were copyrighted the same year.

The Post Office had been printing and selling official post cards since 1877 for a penny apiece, less than half of the postage for a first class letter.  They had rapidly become popular with the poor and those who had quick messages and no desire or expectation of privacy. One wag called them “slow telegrams” comparing them to another terse but far more expensive means of communication.  They contributed to the explosion of Post Office business after the Civil War along with innovations like direct business and home delivery in urban areas and railway mail sorting which slashed delivery times.  Most official postcards were plain with a pre-printed stamp and space for an address on one side with the message written on the reverse.  But the Post Office did offer a limited number of decorated souvenir post cards with engraved decorations on the address side that were proving increasingly popular.

Private companies were allowed to print cards, but regular first class postage had to be affixed instead of the pre-printed post card rate, a powerful disincentive.  The Post Office was loathe to forgo the advantage this gave them and the growing stream of revenue.  But printers—many of whom were not so coincidently in the newspaper business—got the ear of Republicans who were in firm control of both Houses of Congress, with their complaints of unfair government competition.  The Post Office never stood a chance.  President William McKinley signed the Act into law. 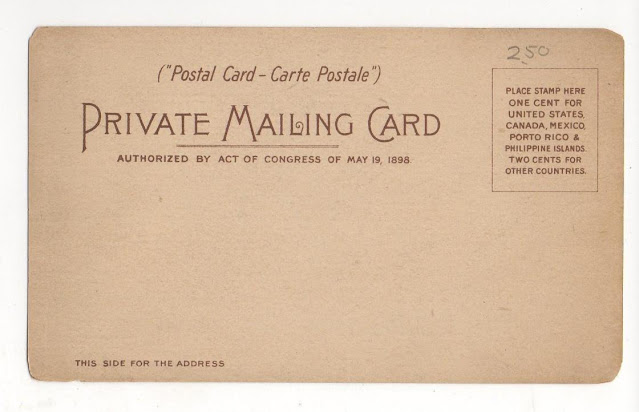 There were restrictions.  The private printers could not use the words post card or postal card.  Instead they had to clearly identify their product with the words Private Mailing Card Messages were not allowed on the address side of the private mailing cards, as indicated by the words “This side is exclusively for the Address,” or slight variations of this phrase. If the front had an image, then a space was left for a message.

The Post Office must have discovered that there was no revenue loss from selling stamps for private cards over their own cards with printed postage because after four years in 1901 Postmaster General Charles Emory Smith voluntarily loosened regulations and allowed printers to use the words Post Card instead of Private Mailing Card and dropped requirement for a fine-print explanation that they were produced under the Private Mailing Card Act.  At the time the sales of souvenir post cards with photos taking up the entire front of the card was booming.  But that eliminated the space for a message and the Post Office still did not allow anything other than address info on the back.  That rendered these types of cards of zero use for conveying any message other than the implied, “Hey, look where I am.”

It wasn’t until the Universal Postal Union which governed international mail cards produced by governments could have messages on the left half of the address side in 1907.  Congress acted quickly to authorize private printers to do the same.  It ushered in the period known as the Divided Back Era by collectors and set off huge new demand.  There was now space to scrawl “Wish you were here” or “home on the 10 o’clock train next Friday” in the somewhat limited space made available.  Producers ramped up production and images were produced of landmarks in even the sleepiest rural hamlets, hence a glut of shots of muddy main streets, local churches, and Civil War monuments that can be found nearly by the bale at post card collector shows.  The wide variety of images and the improving quality including bright color lithography by German companies for the American market meant this period is also called the Golden Age of Post Cards. 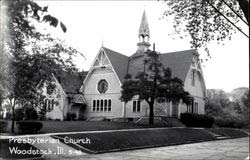 An example of the hyper-local post cards issued by small town printers--an early 20th Century view of the Woodstock, Illinois  Presbyterian Church, one of a series featuring  every church in town.


That ended when World War I abruptly disrupted the supply of German cards.  Even the best American technology could not match the color printing quality of the European cards and interest in collecting post cards, which had become an extremely popular hobby declined, as did sales.  During the war American printers produced cards with white borders to save ink and were sometimes faced with card stock shortages.  Most of the souvenir cards of this period now included a short description of the front image on the message half side of the back, reducing the available space for writing.

Novelty cards with cartoons and funny sayings also became popular, some becoming iconic like the many versions of a gap-toothed hick kid with a cowlick and the words “Me Worry?” which eventually morphed into Alfred E. Newman of Mad Magazine.  Bathing beauties and cars were other popular themes.   Companies also produced Holiday cards for all occasions and advertising pieces. 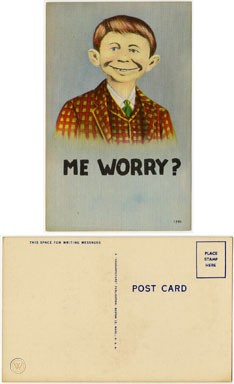 
Ordinary folks could make their own post cards with the introduction of the Real Photo postcards produced using the Kodak postcard camera.  The postcard camera could take a picture and then print a postcard-size negative of the picture, complete with a divided back and place for postage.  These could be sent to Kodak which would print them on glossy photo stock like that used in Brownie snapshots.  They were also used by small town companies for the limited runs needed by the local pharmacy, hotel, or even funeral parlor.  These became so popular other suppliers entered the market, but Kodak continued to dominate this which continued popular well in to the 1930s. 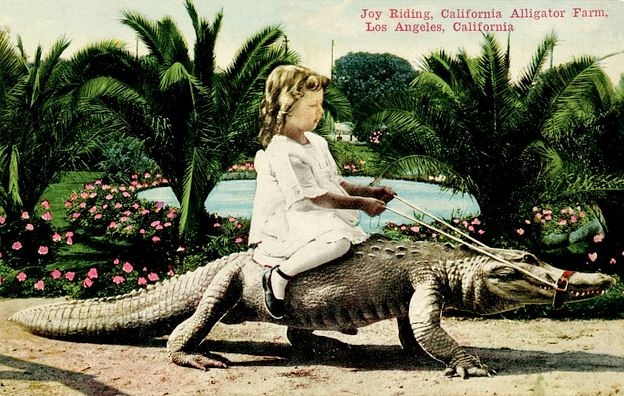 Both a souvenir and a novelty picture post card.  Wish you were here....

Commercial post cards got a huge boost in 1931 when Curt Teich & Co. introduced a new process of printing on high quality rag count.  These so-called linen cards had a rich texture and could hold brighter inks and dyes than previous methods.  The result was often almost painting like with highly saturated colors.  Many were hand tinted from black and white originals.  These cards are now highly prized by collectors. 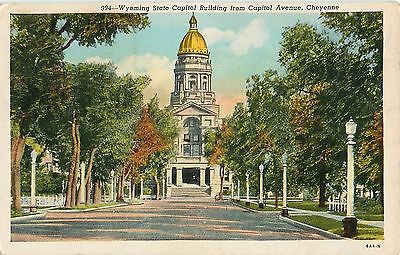 A hand tinted linen post card of the Wyoming State Capitol building in my old home town of Cheyenne.  I have a framed copy hanging in my home study.

The linen cards dominated the market until the introduction of photochrom color postcards by Union Oil Co. for sale at its Western gas stations in 1939.  Printed on high glossy stock the public embraced the “more realistic” images and they had almost completely replaced the linen cards by the early 1950s. 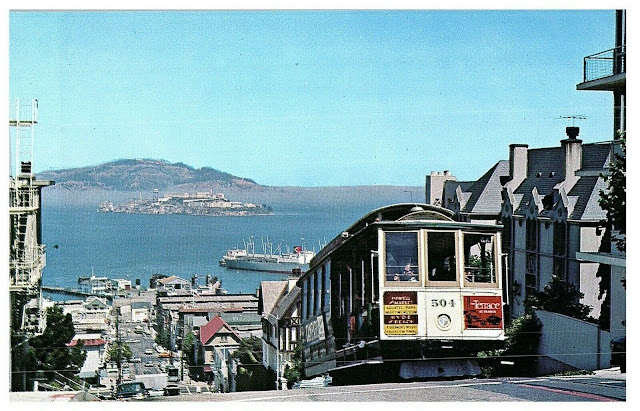 This 1960s era glossy souvenir post card of San Francisco has everything--cable car, hills, a pier, the Bay, cargo ship, and Alcatraz in the distance.

Post cards remained popular through most of the rest of the century.  But the introduction of e-mail, cheap digital cameras and eventually cell phones, and social media rendered post cards obsolete as a means of communication.  All of the folks back home can now access dozens of your personal photos, including ubiquitous selfies instantly instead of getting a single post card two days after you already got home.

As sales shrank, so did the number of companies producing cards and the images available.  Virtually gone now are almost all hyper-local cards.  Each major city or tourist attraction now is represented by a very limited number of stock cards which are harder and harder to find.  They are gone now from most gas stations, restaurant and hotel racks, drug stores, and are even harder to find at souvenir stands and airports.  Those that are sold are packed in the luggage as cheap souvenirs and seldom mailed.  After all, it costs 40 cents to mail a post card now and almost no one has the right stamp so those that are mailed usually have a regular First Class stamp pasted on them. 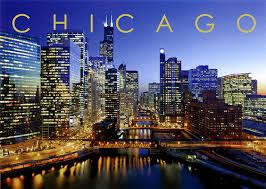 Oh, and almost no one collects new ones anymore.