Anything Goes Bowed On Broadway in 1934 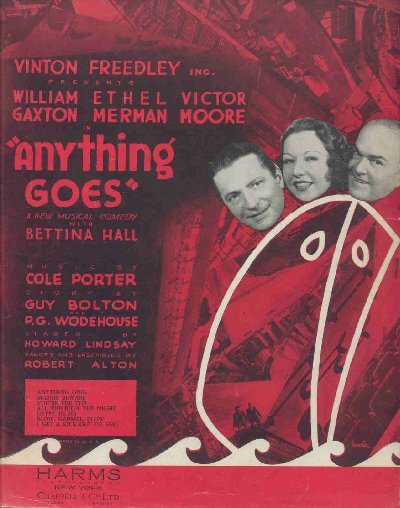 A poster from the original 1934 production of Anything Goes.

On November 21, 1934 a silly froth of a musical farce opened at Broadway’s Alvin Theater featuring a tiny, but leather lunged diva-to-be named Ethel Merman.  Cole Porter’s Anything Goes has gone on to be oft revived in New York, London, and in the movies on the basis of its silly romance at sea plot and the composer’s classic songs.

The book by Guy Bolton and P. G. Woodhouse spun a romantic intrigue and classical farce misunderstanding aboard the liner S.S. American and featured the antics of Billy Crocker, a stowaway in love with heiress Hope Harcourt, who was engaged to Lord Evelyn Oakleigh while nightclub singer Reno Sweeney and Public Enemy #13 Moonface Martin aided him in the quest for love.

The show had a disastrous try-out in Boston.  The script was re-written, much of it unaccredited, by Director Howard Lindsay and Russell Crouse.  Part of the problem was that the producers thought the show should center around the conventional young people—Billy Crocker and Hope Harcourt.  But they were boring.  By contrast saucy Reno Sweeny and the comic gangster Moonface Martin popped, especially in the performances by young Merman and veteran character actor Victor Moore.   Big changes were last minute song additions by Porter, scribbling away furiously in a Newport, Rhode Island guest house.  The additions included the spectacular first act closer with Merman singing and dancing with the crew of the liner to Anything Goes.  The song also gave a new name to the play that had already gone through Crazy Week and Hard to Get. 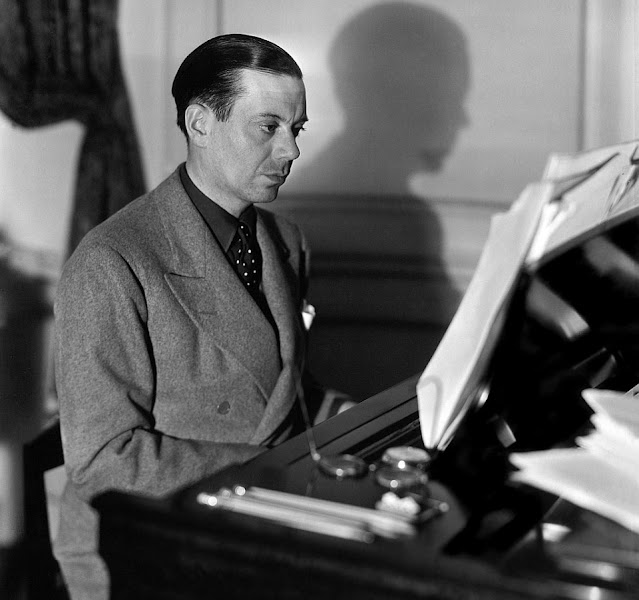 
Other songs in the original production included such future standards as I Get a Kick Out of You, You’re the Top, Blow Gabriel Blow, and The Gypsy in Me.  The final score was so strong that another future classic, You’d be So Easy to Love was cut at the last minute because the show was running long.  It would finally appear two years later being sung by James Stewart to Eleanor Powell in the film Born to Dance.

The show had major Broadway revivals in 1962, 1987, and 2011 each of which did major tinkering with the song line-up, often adding Porter songs from other shows, re-arranging the order, even changing which character sang which songs.  Among the Porter classics shuffled into the show in one or both of these versions were   Friendship, It’s De-Lovely, and Let’s Misbehave.  The many amateur and community theater revivals of the show generally use either the 1934 or 1987 scripts, although even these productions often throw in other Porter material. 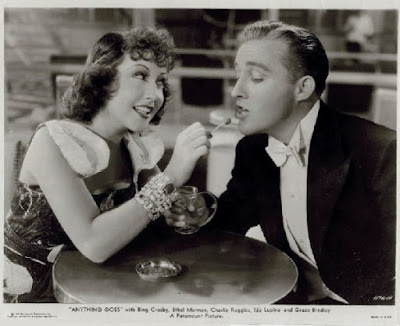 In 1936 Merman revisited Reno Sweeney in Paramount's first version of Any Thing Goes with Bing Crosby's turn as Billy Crocker beefed up from the play and some of Porter's music dropped for songs by other composers.  Twenty years later a middle aged Crosby made a second even more seriously altered version  with a whole new plot and characters with additional songs by Sammy Cahn and Jimmy Van Heusen.

The two film versions, both by Paramount, took even more liberties with the plot, even re-naming major characters.  Both the 1936 and 1956 versions were re-written to shift the emphasis to the male lead, played both times by Paramount’s biggest star Bing Crosby.  And each of the films replaced some of Porter’s songs, particularly the lesser production numbers, with music by other writers.  In 1936, in which Merman reprised her role as Reno, Hoagy Carmichael and three other composers contributed to the show.  The 1956 version had to be drastically re-written by Sidney Sheldon because Crosby could no longer play a naive juvenile.  This time the songwriting team of Sammy Cahn and Jimmy Van Heusen provided the additional material.

In 1954 Merman, then 50 years old, reprised he break-out role in a one hour version on The Colgate Comedy Hour with Frank Sinatra, who she detested, as the male lead, renamed yet again, and Burt Lahr as Moonface Martin.

Merman got to do the title number in a recreation of the 1934 production, complete with choreography, in 1979 as part of the TV show Musical Comedy Tonight. 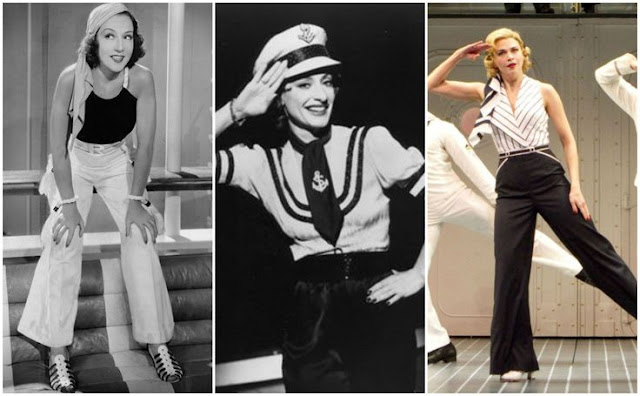 The role of Reno has proved to be irresistible diva bait over the years.  Patti LuPone strutted her stuff in the hugely popular 1987 revival. The reigning queen of British musicals, Elaine Page had her own West End production the following year. Sutton Foster, a diva for the new millennium, took the part in 2011.

The Tony Awards didn’t exist when the original production hit the boards.  But the 1987 and 2011 revivals took home a combined 6 trophies plus armfuls of critic’s Drama Desk Awards.

And somewhere right now an ambitious high school drama teacher with the standout female student performer of his career is struggling to get a large cast to handle the complicated choreography of that first act closer.

Posted by Patrick Murfin at 6:41 AM