When Cheerleading Became a Girl Thing 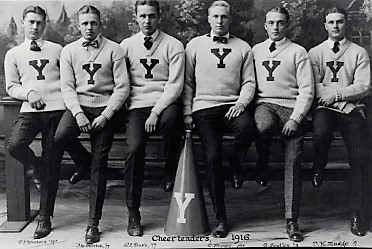 Cheer leading was already a well established tradition at Yale when this 1916 photo was taken before a game with rival Princeton.

The World Series is still going on, the holiest and most important of all American sports championships—shut up and sit down, it’s my Blog and I won’t put up with silly pleas for other contests.  Although we baseball purists may be bereft until Spring Training, the average sports fan is still as happy as a pig in shit.  College football is going full force and still dominates Saturdays.  Basketball and hockey are in the early throws of their interminable seasons.  The NFL owns Sundays and has staked claim to some weeknights for good measure. A sports fanatic’s wet dream come true.  That wet dream is in no small way enhanced by the presence at virtually all of these contests of attractive cheerleaders in tight sweaters and short skirts with smiles on their lovely faces and enthusiasm in their voices.

You might ask, to whom do we owe this froth on the beer stein of athletic bliss?  It you don’t ask, I am about to tell you anyway.

Team sports emerged slowly from the elite colleges and universities on the East Coast in the late 19th Century.  What began as rough pick-up games of primitive football on the Quad with few rules, or even set numbers of players, slowly evolved into more organized contests between fraternities or clubs.  Eventually schools began to challenge each other.  The first interscholastic game is usually credited to Harvard and McGill from Montreal, which played rugby style game with an oblong ball in 1874 and came back for a rematch the next year.

That general style of play spread to other schools—Yale, Princeton, and Columbia which had originally played a soccer-like game in which carrying the ball had been prohibited.  By 1876 the schools agreed on new, mutually acceptable rules and the Ivy League was off and running.  The game was soon refined by Yale’s Walter Camp.  Newspapers began to carry stories of the heroics on the field.  Competition spread.  By 1880 eight universities, including the University of Michigan in the wilds west of the Allegany’s were competing.  Ten years later the number had swollen to 43.

About that time Princeton lads who could not make the team, decided to get in on the fun by organizing the first pep squad—a club in matching beanies and jackets who sat together in the stands and chanted special cheers for their team.  Other members of the crowds learned to join in.  Players reported that they were energized by the show of loyalty and support and played even harder for the glory of the school.

Like other innovations, pep squads spread quickly to other schools and soon college games were almost as much a contest between yelling fans as players on the field.  But still, alas, no real cheerleaders.

That is until November 2, 1898.  Out on the northern hinterlands the University of Minnesota had taken up football and four years earlier a Princeton grad had introduced the Pep Squad to the school.  Naturally, they had their own special cheer which went something like “Rah, Rah, Rah! Ski-U-Mah! Hoo-Rah! Hoo-Rah! Varsity! Varsity! Minn-e-so-ta!”  Catchy, eh?  In the fall of ’98 the team had fallen on hard times and lost four games in a row.  They were discouraged.  The fans were glum. 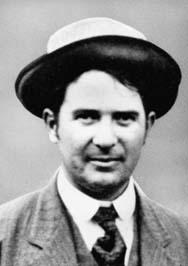 Johnny Campbell--first Yell Leader to step on the field.


On this particular afternoon they were set to play snooty Northwestern University, a powerhouse which liked to cast itself as the equal of the old eastern Ivies.  The Pep Squad got together and decided to try something desperate.  Instead of just sitting together and chanting the cheers in the hopes the crowd would pick it up, they appointed Yell Leaders who stood up, turned around and urged the fans to join the cheers.  Most of them stayed in the stands.  But during a lull in the action one of the Yell Leaders, Johnny Campbell, actually ran onto the field and led the cheer through a megaphone.  The crowd went wild, and the inspired team rose up and whipped Northwestern.

Thus, the early modern cheerleader was born.  Soon other members of the pep squad came down from the stands to work along the sidelines with their megaphones.  The custom spread like wildfire.

So much so that by the 1920s and early ‘30s cheerleaders were a regular feature in the college comedies that were popular in silent films and early talkies.

Meanwhile cheerleaders were jazzing up their acts a little—adding fight songs, a greater variety of cheers, arm movements, and a bit of acrobatics to the sidelines. 
In 1923, it was again the University of Minnesota, which shocked the sporting world by allowing co-eds to cheer alongside the men.  The innovation seemed like an attack on a manly preserve.  It was slow to catch on.  It wasn’t until the Draft in 1940 followed shortly by World War II started draining campuses of men that the ranks of women cheerleader really took off.  By war’s end they were the majority.

When Johnny came marching home, he did not, by in large, use the GI Bill to a become cheerleader.  In what could be a case study about how feminization of any activity tends toward ghettoization, by the early ‘50’s outside of the few remaining bastions of all male schools, cheerleading was dominated by women.

Even in those male bastions, cheerleading lost its luster a bit and its practitioners sometimes derided for their girly pursuit. When George Bush attended Yale he was a baseball star.  When son George W. went there in the ‘60s he was a cheerleader and was mocked for it.

That trend continued until 90% of collegiate cheerleaders are women, according to something called the International Cheer Union (ICU).  Of late, however, a few previously all-female teams have added a few men for muscle for the increasingly complex and daring acrobatics that have become the center of modern cheering. 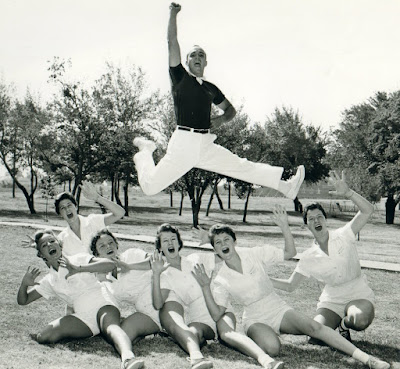 Lawrence "Herkie" Herkimer of Southern Methodist University is credited with inventing much of post-World War II cheerleading and spreading the techniques through his cheerleading clinic.  Here he performs his signature Herkie Jump.  For almost two decades he recreated this shot annually with a new crop of comely coeds.


The new elements that revolutionized cheerleading can be traced to one man—Lawrence “Herkie” Herkimer, a cheerleading coach at Southern Methodist University.  In 1948 he founded the first cheerleading clinic at Sam Houston State Teacher’s College.  Texas rapidly became the epicenter of cheering culture.  According to the breathless description on the ICU web page:

Herkie went on to develop his signature “Herkie” jump, the spirit stick, the “pom pon” (also called “shakeroos” in that time), all important elements in cheerleading to this day.  Separate cheerleading pom pon teams (also termed “Cheerdance”) are also trained by Herkimer and begin to develop on sport sidelines around the United States as an added entertainment and game leadership component of cheerleading.

The change in Cheerleading was reflected in popular culture.  Romance between cute cheerleaders and hunky athletes became a staple of TV and movies in the ‘50s and ‘60s.  But when teen angst comedies caught on in the ‘80s, cheerleaders took on a darker, more menacing aspect.  They were seen as the cold and haughty unapproachable objects of outcast nerds’ fantasies or often as the vicious leaders of high school cliques tormenting sensitive girls.


By the ‘70s things were changing again.  On the pro level the sensationally popular Dallas Cowboy Cheerleaders made cheering sexy.  Girls on squads down to Junior High were soon liberated from bulky sweaters, pleated skirts, and knee socks.  If not quite as much cleavage or thigh got flashed on high school sidelines, it was a matter of degree.

The Cowboy Cheerleaders also introduced much more dance and complicated choreography.  Pretty soon the second stringers of the Pom Pon squads were doing most of the pep work leading the star cheerleaders to concentrate on sideline performance and half-time spectaculars.

In the mid-70s entrepreneur Jeff Webb founded a new cheerleading camp that introduced the “cheerleading routine”—a mini-show incorporating dance and acrobatics.  That led to cheerleading as an athletic completion in its own right.  He founded that ubiquitous ICU and began franchising his camps and systems worldwide.  He made a deal with the infant and content starved cable network ESPN to feature his National Cheerleading Championships which were also syndicated for over-the-air broadcast. 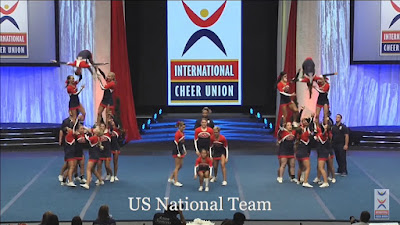 The US National team competes in a recent ICU championship.  Men are back at high level cheering, mostly as the brawn for pyramids and aerial stunts.


Now, in addition to high school and college teams there are competitive All Star teams not associated with any other athletic teams to cheer for.

These competitions, high school, college, and All Star have become the focus of a new genre of cheerleading movies—usually a variation on the tried and true Bad News Bears formula in which scrappy misfits and underdogs come together to upset a nasty and arrogant team for a championship and glory.

No wonder little girls still dress up as cheerleaders on Halloween—and almost no boys do.