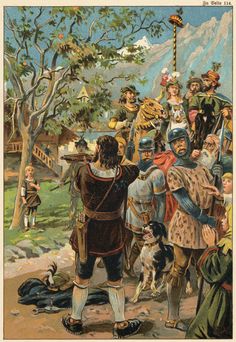 Known to the English speaking world as William Tell and Napoleonic Era European romantics as Guillaume Tell, he became a heroic symbol of Swiss independence, revolutionary resistance to oppression and tyranny, and a blank page various political ideologies claimed for their own. 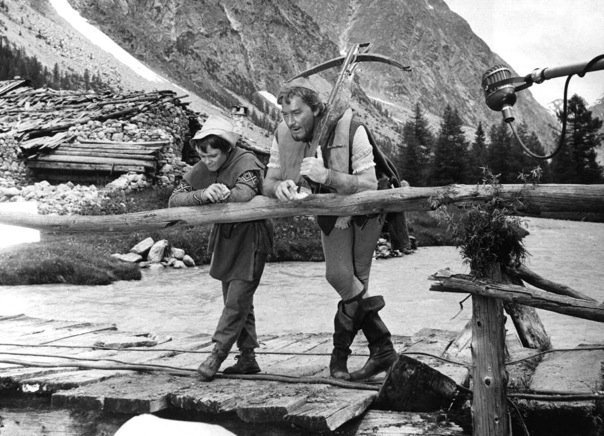 In the early 1950's Errol Flynn bankrupted himself trying to revive his sagging career by producing a William Tell film which was aborted and never released.


Americans know him mostly as a motif in countless comedy sketches going back to vaudeville and animated cartoons, built around gags of the boy and the apple stripped of any context.  They also may remember the Overture of an opera by Gioachino Rossini became the theme song for another mythical hero—The Lone Ranger.

Most modern scholars believe Tell is a mythical figure, analogous to the English Robin Hood.  They can find no evidence that he or his son ever existed or that Albrecht (sometimes Herman) Gessler ever oppressed the people of Altdorf in the Canton of Uri.  The Swiss tend not to take kindly to these scholars and have been known to burn them in effigy in the streets.  Some Swiss scholars still make a living producing tomes that make historical claims for the truth of at least a nugget of the folk tale.  And like Englishmen love and believe in a rebellious Saxon noble, the Swiss, no matter which of four languages they speak, swear by the reality of William Tell.

Here is the story in its most familiar form.

Gessler arrived in Altdorf to assume his duties as Landvogt, a local tax collector/enforcer for an Austrian feudal prince—very analogous to the authority of the Sheriff of Nottingham in the Robin Hood tales—already drunk with his new power.  He erected a pole in the marketplace and demanded that the locals bow down to his hat which he perched on it.  He stationed troops to enforce the order and often sat watching the locals grovel in fear.  Enter Tell and his ten year old son Walter.  Tell was by all accounts a large and powerful man—a hunter, mountain climber, and boatman in early accounts—was a local gentleman of wide repute and respect and in later accounts a rustic peasant leader.  He happened to be carrying his crossbow. 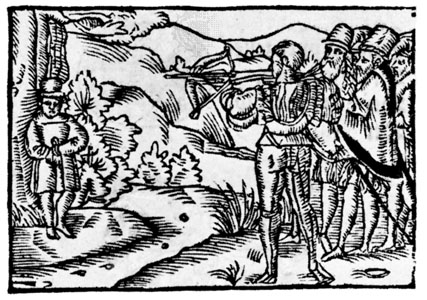 
Tell haughtily refused to bow down to a hat and was seized by Gessler’s troops.  The cruel tyrant had already filled the jails and local dungeons and had recently blinded an elderly man for some trivial or imagined offence.  Gessler, aware of Tell’s reputation with his weapon, offered his prisoner a choice—immediate death or a reprieve if he can shoot an apple off of the head of his son’s head at several paces with a single shot.

Tell comforted his son and then with unerring calm split the apple with a bolt from his crossbow.  Gessler noticed that Tell had a second bolt.  He demanded to know what he intended to do with it.  Tell demurred until he was assured that no matter his answer his pardon would be honored.  Then he told Gessler that the second bolt was meant to kill him should the first have gone astray and wounded the boy.  Infuriated Gessler had Tell and his son seized.

The Tells were put on a boat to transport them across Lake Lucerne to Küssnacht to a dungeon in Gessler’s new castle.  But a terrible storm erupted, and the boat was nearly lost.  The oarsmen, in fear for their lives, unbound the powerful Tell who took the rudder and brought the boat to shore—where he leapt to safety on a rocky point now known as Tellsplatte.  He also somehow still had his famous crossbow and that second bolt. 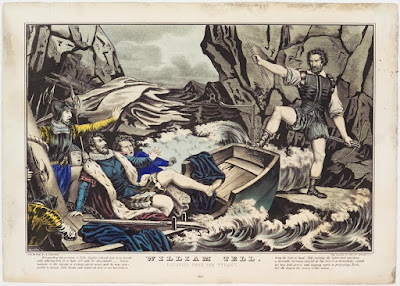 An American take on the embellished legend--William Tell Escapes the Tyrant by Nathaniel Currier.


He ran cross country to Küssnacht where he laid in wait at a narrow point in the route he knew Gessler must take from Altdorf.  There from hiding he ambushed the official, assassinating Gessler with a single shot.

Escaping into the mountains Tell joined existing bands of rebels and/or raised a guerilla army to rise up against the Austrians.  The successful revolt that followed united most of the Swiss Cantons into the Old Confederacy and thus began the history of the Swiss as a nation.

Tell was said to have died heroically 40 years later as an old man when he tried to rescue a child from a raging river.

None of this is corroborated in contemporary annals.

The first mention of Tell in relationship to the rebellion seems to be in the White Book of Sarnen by a country scribe named Hans Schreiber in 1475.  Shortly thereafter was a song called the Tellenlied first appeared in a manuscript in 1501 although it was clearly already widely sung.  In neither of these accounts was Gessler named or is there mention of his assassination.  The Tellenlied called Tell the “First Confederate.”

The first printed version of the story appeared in 1507 in Chronicle of the Swiss Confederation by Petermann Etterlin, a soldier/scholar who wrote in German but supported the French factions ruling Lucerne.  Around 1570 Aegidius Tschudi from Glarus compiled his monumental Chronicon Helveticum which in turn was the main source for Johannes von Müller’s History of the Swiss Confederation in 1780—written under the ideological influence of rising French radicalism—and inspiration for Friedrich Schiller’s play William Tell in1804.

In each of these versions the story of Tell became more elaborate with details filled in, names and dates supplied, and a mantel of historical verisimilitude draped around it.  The story also adapted to more modern political developments—there really was a Gessler family, for instance, which administered a fiefdom of a Hapsburg prince around Zurich in the late 14th Century.  He became a stand-in for imperial Austrian designs on Switzerland three hundred years later.

Tell inspired The Three Tells—heroes of the 1653 Swiss Peasants’ War who dressed as Tell attempted to assassinate Ulrich Dullike, Schultheiss (Mayor) of Lucerne for the Hapsburgs in 1653.  In the writings of early 19th Century Romantics, they became similar to certain Nordic myths and King Arthur in English folklore, sleeping under the mountains and waiting to be resurrected and come to the salvation of the nation in a time of peril. 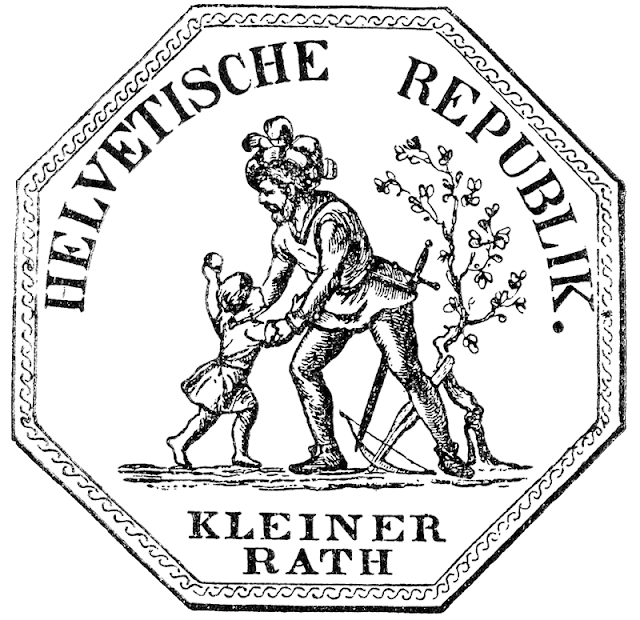 Napoleon's puppet Helvetic Republic sought legitimacy by draping itself in the mantle of William Tell as an anti-Austrian patriot.  The  short lived Republic incorporated Tell into its official seal.


During the French Revolution Tell was adopted as a model for rebellion against authority.  He was re-cast as a peasant leader and his role as a revolutionary elevated over earlier versions which emphasized his individual defiance.  In the Napoleonic Era Gessler became a tool of an unseen—and not even historically accurate—Austrian Emperor.  In the post-Napoleonic era Tell became the symbol of resistance against all oppression—including that inflicted in the false hope that Bonaparte would be a liberating force in Europe.

When Napoleon invaded western Switzerland and imposed the Helvetic Republic in 1798, the new central government sought legitimacy by making Tell and his son the central device in their official seal.  When the Republic was overthrown in 1803 and the Confederacy of Cantons restored in the period known in Swiss history as the Restoration, Tell became a symbol for resistance to all foreign meddling in Swiss affairs.  This is the Tell of Schiller’s play and Rossini’s opera. 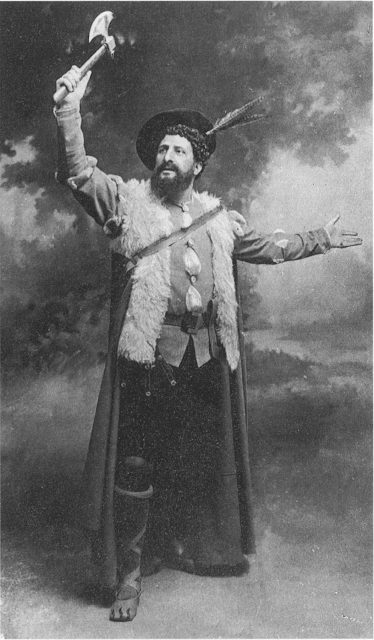 Since then, he has been schizophrenic—simultaneously hailed as a hero of left populism and of right-wing Swiss nationalism.  He has been cited as the inspiration for Guy Fawkes and the Gunpowder Plotters in England in 1604, along with Brutus as played by John Wilkes Booth for his assassination of Abraham Lincoln, and by late 19th Century anarchist assassins and attempted assassins of European rulers.

Adolph Hitler in Mein Kampf praised Tell as the prototype of a Germanic hero and man of action.  He sang a different song after young Swiss Francophone patriot Maurice Bavaud—dubbed the “New William Tell” by his admirers—attempted to assassinate him in 1938.  He subsequently banned all performances of both Schiller’s play and the Rossini opera.  At a banquet in 1942 he complained, “Why did Schiller have to immortalize that Swiss sniper!”