Armistice or Veterans Day Remains the Holiday With an Identity Crisis 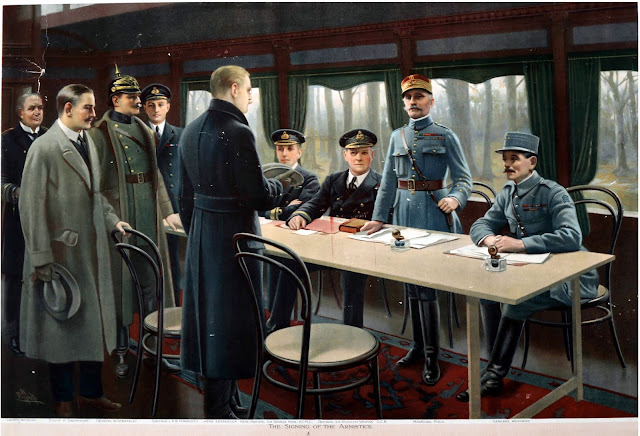 Note:  A return of a semi-regular post.  But it will be new and news to some of you.

11/11/11.  That’s how Americans remembered the Armistice that went into effect on November 11, 1918 at 11 a.m. local time in France ending hostilities on the Western Front in what was up to that time the most catastrophically bloody war in history.  The German High Command signed the armistice just two days after revolutionaries in Berlin overthrew Kaiser Wilhelm and proclaimed a Republic. The shooting part of the Great War was over.  It would not officially end until the Treaty of Versailles was signed on June 28, 1919.

President Woodrow Wilson issued a proclamation declaring the day as Armistice Day, an occasion for national Thanksgiving and prayer.  Americans and the world were thankful, but they were more in the mood for wild celebration that day than for sober reflection and prayer.  From the great cities of Europe to the simplest of rural American villages spontaneous celebrations erupted in the streets. 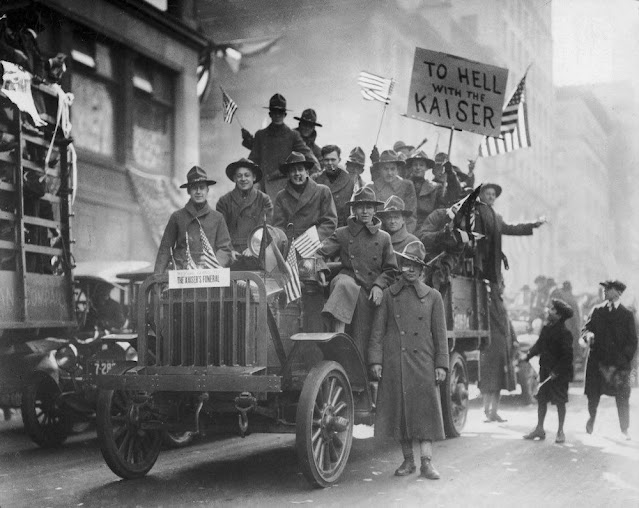 These Doughboys may never have made it to the Front, but had plenty to celebrate in an impromptu New York City parade celebrating the Armistice on November 11, 1918.

By the time of the first anniversary most Allied nations had officially adopted November 11 as a holiday.  In Britain, Canada, and other Commonwealth Countries it is called Remembrance Day or Poppy Day for the red paper flowers almost universally worn on that day.    In the United States, where holiday proclamations were traditionally left to the states, only a handful had yet designated a formal holiday.  But with troops only recently come home, cities and towns across the country marked the day with parades and speeches. 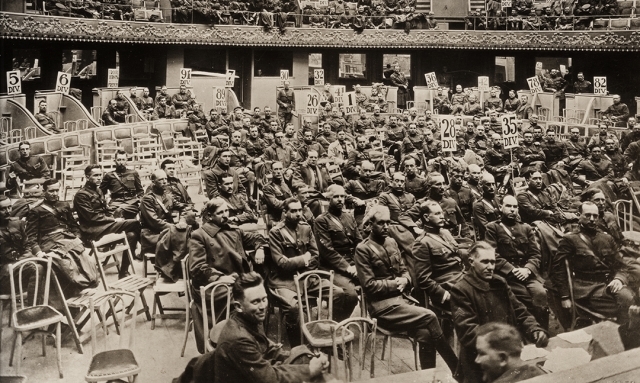 Colonel Theodore Roosevelt, Jr. issued the call for the Paris Caucus where Officers and enlisted men still in France in May 1919 laid the groundwork for the establishment of the American Legion.


The spread of the day as an official holiday was promoted by veterans’ organizations.  One such organization was envisioned by Colonel Theodore Roosevelt, Jr. as a group analogous to the Grand Army of the Republic, the organization of Civil War Veterans which dominated American public life for more than 50 years.  Within days of the Armistice Roosevelt gathered officers in Paris to plan for the organization.  In March 1919 the Paris Caucus of over 1000 officers and enlisted men adopted a temporary constitution and the name American Legion.  Congress granted the Legion a charter in September and a founding convention was held in Minneapolis, Minnesota over three days that coincided with the 1919 Armistice celebrations.

Unlike the Veterans of Foreign Wars (VFW), an existing organization of Spanish Civil War, Philippine Insurrection, Boxer Rebellion, and Mexican Expeditionary veterans which began accepting Great War veterans into their existing network of Posts, the American Legion had a distinct ideological tone.  From the beginning, its leadership was in ultra-conservative hands, and some were eager to mobilize the ranks in campaigns against the Red Menace of the post war period.  Legion officers often encouraged their members to act as organized strike breakers.

On that same Armistice Day in 1919, an American Legion parade in Centralia, Washington, the heart of lumber country and long running labor strife, broke ranks on a pre-arranged signal and attacked the local hall of the Industrial Workers of the World (IWW). 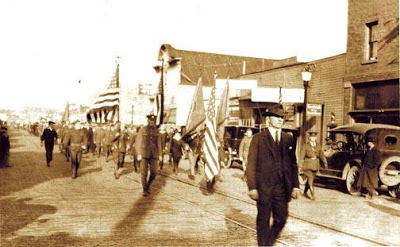 The American  Legion  in Centralia, Washington parading on Armistice Day 1919 moments before they  broke ranks to attack the IWW Hall. 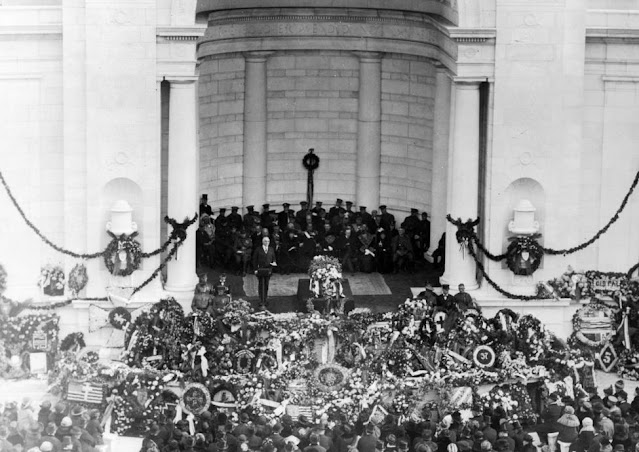 President Warren G. Harding, standing left at the entombment of the Unknown Soldier on Armistice Day 1921.  He also proclaimed a one-time Federal Holiday for the occasion.

When the Tomb of the Unknown Soldier was dedicated on Armistice Day 1921, a onetime Federal Holiday was declared.  In 1926 a Congressional Resolution proclaimed the “recurring anniversary of should be commemorated with thanksgiving and prayer and exercises designed to perpetuate peace through good will and mutual understanding between nations” and that the President should issue an annual proclamation calling for the observance of Armistice Day.  It still fell short of the declaration of a Federal holiday.  At the time 27 states had official observances.  Spread of the holiday, although popular with the public, was strongly opposed by business interests.

Although the rival veterans’ organizations both campaigned for the establishment of Armistice Day as an official Holliday and supported wounded veterans, their emphasis, and political agenda, was clearly different.  The VFW was more interested in obtaining benefits and support for veterans while the Legion promoted respect for the military and patriotism.  The VFW spearheaded the campaigns that resulted in the first Veterans medical benefits, vocational training for wounded veterans, the establishment of the Veteran’s Bureau, and an act of Congress to pay Great War veterans a Bonus in 1942.

When the Depression hit veterans especially hard, the VFW endorsed efforts to get Congress to authorize an early payment of the promised Bonus.  Although not officially supporters of the Bonus March on Washington in 1932, they were outraged when troops under General Douglas MacArthur violently dispersed the demonstrators and destroyed their camp.  The Legion, on the other hand, supported the Army and painted the Bonus Marchers as Communists. 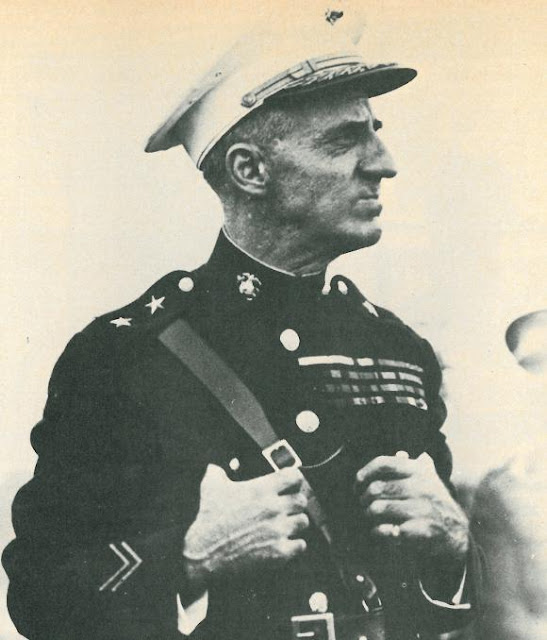 Retired Marine Corps Major General Smedley Butler, a Medal of Honor winner, was recruited by business leaders and high American Legion official to be the "Man on a White Horse" to front a coup d'etat overthrowing Franklin Roosevelt in 1933 instead, he exposed the plot to Congress.

In the early days of the Franklin Roosevelt administration some Legion leaders were involved in the aborted plot to stage a military coup against the President and replace him with a military Man on a White Horse.  They planned to use legion members as Italian Fasciitis and German Nazis had used their Black and Brown Shirts, largely drawn from the ranks of their own veterans.  The plot was exposed when an officer who was offered the titular role military savior, Marine Corps General Smedley Butler publicly exposed the cabal.  The plot was averted but its leaders were so powerful that none were ever charged or tried for treason.

By then another world catastrophe was on the horizon.  After World War II veterans organizations and the public were both divided between creating a new public holiday making the end of that war, mostly likely on V-J (Victory over Japan) Day, or if Armistice Day should be renamed to include the new wave of veterans.  Veterans of World War I, as the first conflict was now called, were united in their desire to keep Armistice Day for themselves.  The huge wave of young vets was split.  What ever happened, business interests were strongly opposed to the creation of any more Federal holidays for any reason. 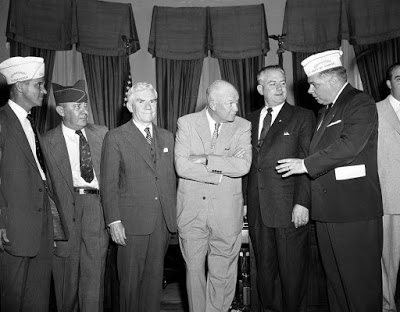 After signing legislation creating the official new Federal Veteran's Day holiday, President Dwight D. Eisenhower posed with leaders of the American Legion, left, and the Veterans of Foreign Wars, right. Representative Edwin Rees of Kansas, the sponsor of  the legislation is to the immediate left of Ike.

Finally, the issue was settled when on June 4, 1954 with a whole new crop of veterans from the Korean War already coming home, President Dwight D. Eisenhower signed the Act of Congress that transformed Armistice Day into Veterans Day.

Traditionalists still grumbled.  But they were really given something to complain about in 1968 when Congress passed the Uniform Holidays Bill, which sought to ensure three-day weekends for federal employees and to encourage tourism and travel by celebrating four national holidays, Washington’s Birthday, Memorial Day, Veterans Day, and Columbus Day on Mondays.  Federal Veterans Day was moved to the last Monday in October.  When the first observance under the new scheme was held on October 21, 1971 the public was outraged and most states refused to go along, maintaining November 11 as state holidays.  In many states that meant two observances—and competing claims for paid holiday by workers in private industry covered by labor contracts.  Businesses hated that.

Bowing to public pressure President Gerald Ford signed a new law returning the observation of Veterans Day to November 11th beginning in 1978. If November 11 falls on a Saturday or Sunday, the Federal government observes the holiday on the previous Friday or following Monday.

In recent years mid-week observance of Veterans Day has lowered its public profile.  Fewer and fewer cities and towns held Veterans Day parades.  Participation in local commemorations faded as first the World War I veterans passed and then the ranks of World War II and Korean Veterans shrank.  Veterans of the unpopular Vietnam War often felt unwelcome in Legion and VFW posts and were stigmatized by the public as troubled and possibly dangerous.

Veterans organizations became outraged as a wide-spread movement to keep kids in school resulted in Veterans Day being dropped as a school holiday in many places.  Ironically, with schools in session and many state legislatures mandating veteran curricula on that day, the holiday may have gotten a boost in interest among students who previously would have just enjoyed a day away from studies.

The long, lingering wars in Iraq and Afghanistan produced new rounds of veterans, many of them National Guardsmen and Reservists, older soldiers with deep roots in their home communities.  They are giving the day new meaning. 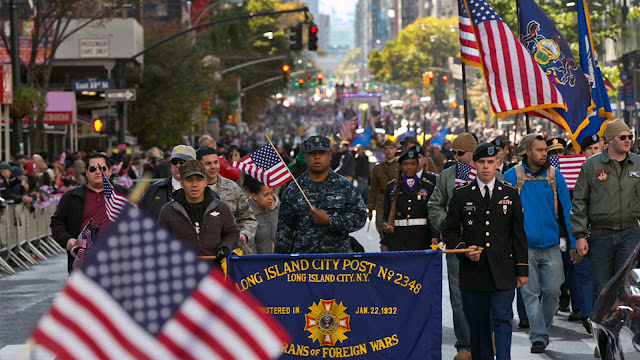 Younger Vets have replaced aging World War II, Korean, and Vietnam vets in parades like this pre-pandemic one in New York City.  Parades and public observances are fully back this year.


Both pro and anti-war people have used the day to advance their causes.  Despite the predictably bellicose stance of the national leadership of the American Legion and to a lesser extent the VFW, most of these new veterans adamantly refuse to allow the holiday to be politicized.  They want to honor the service of all veterans regardless of opinions on the wars by the public—or by veterans themselves.

Unfortunately, that determination was ignored by Donald Trump who famously yearned to stage an epic military parade including tanks and missiles to roll by a reviewing stand like observances in France—and Russia.  While that wild dream was hosed down by the almost unanimous opposition of military leaders, technical difficulties, and the enormous expense, the Cheeto-in-Charge continued to exploit veterans even as he personally cheated on millions of Dollars of promised charitable donations,  short changed and mismanaged veterans’ health care, and has imprisoned and deported immigrant veterans including wounded heroes who were promised a path to citizenship for their service.

Posted by Patrick Murfin at 7:17 AM