A Cheyenne Winter Song with art.

It is still Native American Heritage Month, so it is appropriate for us to turn to the seasonal music of Native American and First Nations peoples.  Many, of course, are Christian—Roman Catholic from lands claimed by the French and Spanish as well as converts from U.S. missionaries like the Salish and Kootenai Tribes  (Flat Heads) in western Montana;  Protestants like the Lenape (Delaware) converted by the Moravians and others and many Cherokee and related tribes originating in the South East;  pockets converted by other denominations during the Reservation Era;  some Russian Orthodox in Alaska and Congregationalists in Hawaii. 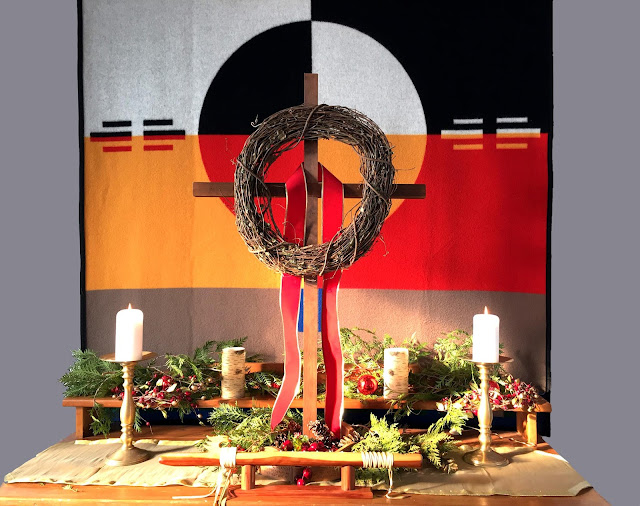 A Protestant altar set up for a Native American Christmas service.

But many aboriginal people reject Christianity as an alien and hostile religion of conquerors and settler colonists.  In recent years the move away from Christianity has been accelerated by the cultural renaissance fostered by American Indian movements of the 1960s and ‘70s and more recently by rage over the forced separation of families and brutal boarding schools run by churches in Canada and the U.S. resulting in wide-spread abuse, neglect, and sexual exploitation.

Armed Royal Canadian Mounted Police officers abet the forced abduction of First Nations children by Catholics to state sanctioned boarding schools where hundreds of thousands died and many more were abused and scarred for life.  Similar scenes were acted out by troopers in blue coats in the U.S.  Outrage over the practice has driven many indigenous peoples in both countries from Christianity.


Some have tried to synthesize Christian and traditional worship, most notably the Native American Church which uses psychedelic peyote as a sacrament.  It is now the most widespread indigenous organized religion among Native Americans in the U.S., Canada, and Mexico with an estimated 300,000 adherents.

The logo of the Native American Church which synthesizes Christianity and aboriginal traditions with the use of  peyote as a sacrament.


Others, however, have turned increasingly to traditional tribal rituals, mythologies, and customs often having to resurrect them from the lore of elders and reviving nearly lost languages.  Some like the Hopi, Zuni, and Navaho of the American Southwest were powerful enough to maintain the religion and culture. 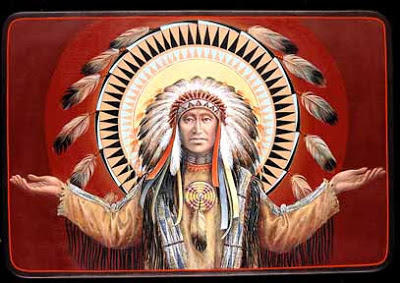 There are many icons depicting Native American Christ figures.  This one by Father John Giuliani represents a Lakota Jesus.


Although Anglo New Agers have tried to promote Native American Spirituality as a homogeneous and touchy-feely ecological mysticism, the many nations and tribes had diverse rituals and belief systems, each due respect and honor.

Many traditions from the Woodland tribes of the Northeast and Great Lakes to the high plains horse cultures and the distinct worship of Pacific Northwest and Alaskan peoples had their own winter songs which acknowledged time of darkness, cold, and often starvation while thanking their spirit guides, for support and guidance and looking forward to a time of rebirth. 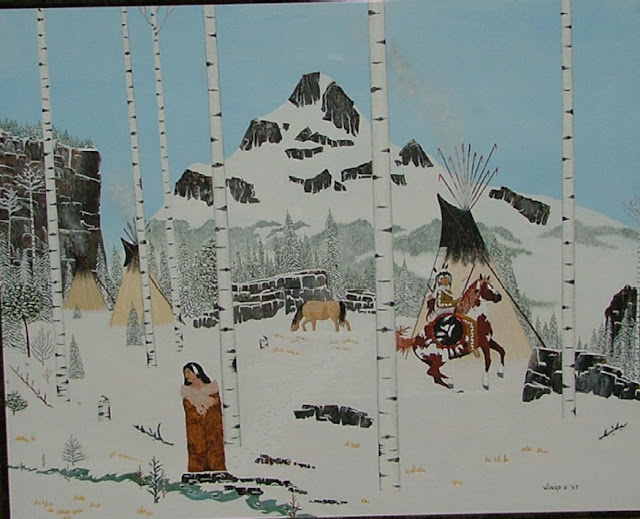 
Today we sample a Winter Song of the Northern Cheyenne chanted by a drum circle over an organ drone.