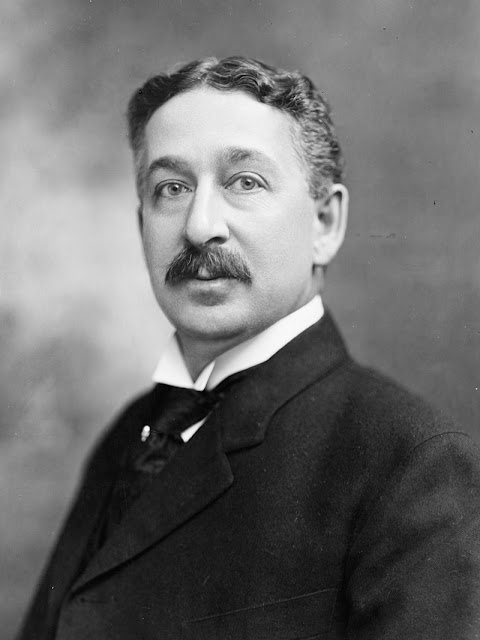 On this date in 1904 King C. Gillette secured a patent on a safety razor and the disposable blades to use in it.  The products quickly changed the lives of American men and the and the culture.  Men were liberated from straight razors which required daily stropping to keep sharp and except in the deftest of hands apt leave minor or major cuts—a day without blood on the towel was a victory for many.

A major victim of the safety razor was the ubiquitous neighborhood barbershops and the ones that were in virtually every major office building and many factories where many men gathered daily for a professional shave and comradery with their personal shaving mugs lining shop shelves.  By the Depression most such shops would vanish, and the survivors focused on cutting hair.  By the 1960’s most barbers did not even offer shaves.

On the other hand, drug stores prospered offering the razors, and more importantly the blades which needed to be regularly replaced along with associated shaving products—soaps, mugs, and brushes (later brushless creams like Burma Shave and aerosol foams), aftershave lotions, and styptic pencils.  Gillette showered the stores with plenty of promotional materials, especially the large placards of Gillette Blue Blades packages, posters, and display cases.

And, of course, the razors changed the way men looked.  Ease of shaving at home eliminated the beards many men wore just to avoid the pain and hassle.  The impressive moustaches many men wore in the late 19th and early 20th Centuries were grown mainly because the upper lip was one of the hardest parts of the face to shave without injury.  During World War I Doughboys were issued safety razors and blades—a contract that made Gillette millions—and came home with the clean shaven look became considered modern. 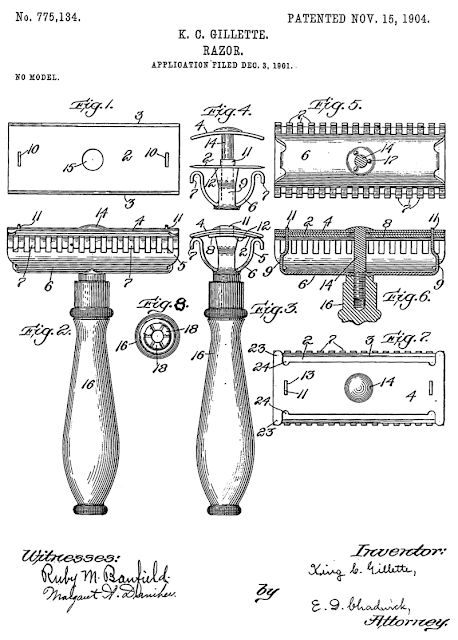 Gillette's name was on the patent, but his conception was engineered by others.


Although King Gillette’s name was on the patent, he was not an inventor.  He was a salesman who came up with a marketing idea, found a product that would fit that model, and then spent years finding the men who could develop his vision.  When asked about his long attempt to develop a razor Gillette said, “If I had been technically trained, I would have quit.”

King Camp Gillette was born on January 5, 1855, in Fond du Lac, Wisconsin, and raised in Chicago, where his family survived the Great Chicago Fire of 1871.

He was a middle aged salesman for the Crown Cork and Seal Company, the firm that developed the modern bottle cap, in the 1890s.  Gillette saw bottle caps which would be thrown away after the bottle was opened could be the model for basing a business on a product that was used once or a few times and then discarded.  He cast about for various ideas before hitting on safety razors and blades.

Safety razors had already been developed in the mid-19th Century but used a forged blade. In the 1870s, the Kampfe Brothers developed one type of such razor, but the blades were expensive and hard to produce in the huge quantities he envisioned.   Gillette recognized that thin carbon steel blades could be stamped out on a mass basis dropping the cost to the blades exponentially.

The most difficult part of development was engineering the blades because thin, cheap steel was difficult to work and sharpen. This accounts for the delay between the initial idea and the product’s introduction. Steven Porter, a machinist used Gillette’s conceptual drawings to create the razor to hold the disposable blades.  William Emery Nickerson, who Gillette took as a partner, changed the original model, improving the handle and frame so that it could better support the thin steel blade and designed the machinery to mass-produce the blades, and he received patents for hardening and sharpening the blades. 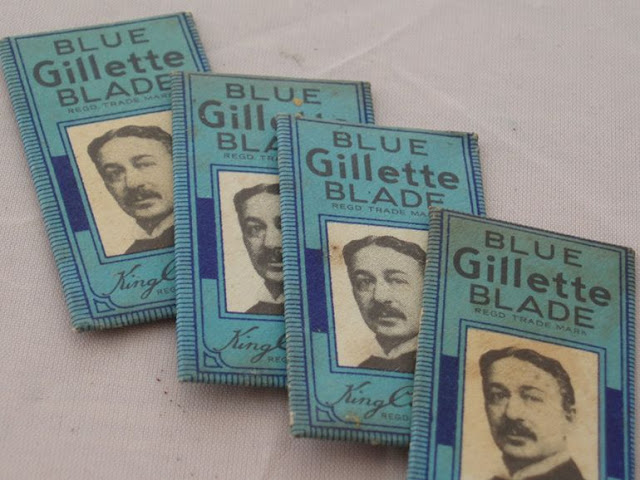 Gillette Blue Blades became the most recognizable packaging in America.


To sell the product, Gillette founded the American Safety Razor Company on September 28, 1901 (changing the company’s name to Gillette Safety Razor Company in July 1902) and obtained a trademark registration for his portrait and signature on the packaging.  That made him a relatively early pioneer of brand name marketing.

The company finally went into production beginning in 1903 but sold only 51 razors and 168 blades. The first razor retailed for $5—equivalent to $142 today and half the average working man’s weekly pay.  The following year new patents were issued, and production was ramped up.  Within a few years Gillette drastically slashed the retail price of the razor making it a loss leader to market the blades.  By 1908, the corporation had established manufacturing facilities in the United States, Canada, Britain, France, and Germany. Razor sales reached 450,000 units and blade sales exceeded 70 million units in 1915.

The razor and blades business model credited to Gillette would go on to be applied to many other types of products from ballpoint pens to the notoriously expensive ink and toner sold for relatively cheap computer printers. 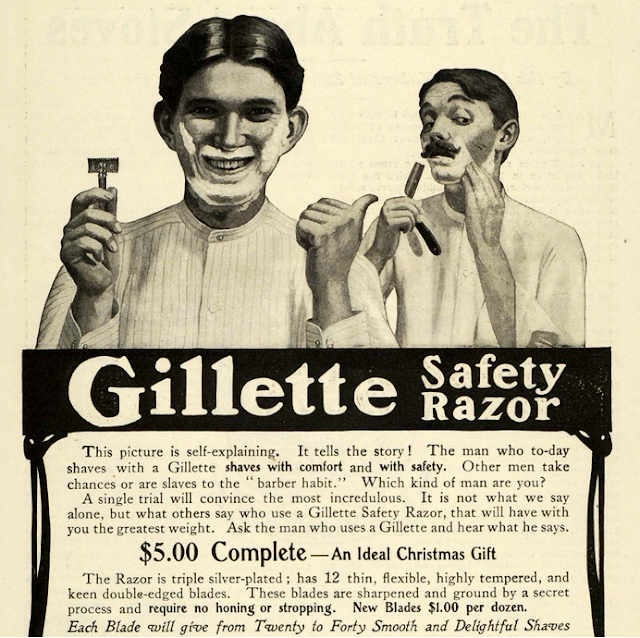 By the time this advertisement appeared the price of the razor had been drastically slashed to encourage the use of blades.  The company was still trying to lure reluctant straight razor traditionalists and promoting a modern, clean shaven men's style.  But the claim that each blade was good for 20 to 40 comfortable shaves was wildly exaggerated, especially for men with heavy beards.

Gillette also recognized that regular even if minor, improvements to the razors and blades could provide patent protection from competitors and also drive up sales to men always looking for a smoother, more comfortable shave.

Gillette sold his majority interest in the company to a rival director, John Joyce in the mid-1920s.  It made him a very wealthy man and he retired with his wife Alanta “Lantie” Ella Gaines enjoying traveling the world and spending time at the Palm Springs, California resort the Desert Inn owned by Nellie Coffman.  He purchased a large ranch in the Santa Monica Mountains near Calabasas in Southern California in 1926. The master plan and new buildings on the ranch were designed and built renowned architect Wallace Neff in the Spanish Colonial Revival style.

But his lavish spending and the hit his company stock took in the Wall Street crash of 1929, left Gillette nearly broke.  He died on July 9, 1932 in Los Angeles.  His widow was forced to sell the ranch and other properties to settle his debts.

Business was not Gillette’s only interest.  He rose to Grand Master of the York Rite Free Masonry.  To the surprise of many, he was also a Utopian socialist. He published a book titled The Human Drift in 1894 while he was working on his razor which advocated that all industry should be taken over by a single corporation owned by the public, and that everyone in the US should live in a giant city called Metropolis powered by Niagara Falls. A later book, World Corporation in 1910) was a prospectus for a company set up to create this vision. He offered Theodore Roosevelt the presidency of the company, with a one million dollar salary.  Roosevelt of course declined.  Gillette’s last book, The People’s Corporation in 1924 was written with Upton Sinclair and later inspired Glen H. Taylor.

Marketing was always a Gillette strong point.  In the 1950's the Look Sharp, Be Sharp March was the most recognizable commercial jingle in America heard by millions on boxing and other sports programing.

Meanwhile his company continued Gillette’s marketing vision and regularly upgraded its products.  Improved double-edged blades were developed including Thin Blades and then stainless steel blades that made shaving more comfortable and the blades longer lasting.  The introduction of a dispenser saved many fingers cut while replacing blades.  Around 1960 the adjustable razor was introduced with settings for the coarseness of beards and skin sensitivity.  The original Fat Boy model was joined by Thin Adjustable and other of various handle lengths and with steel, brass, or plastic handles.

As a boy in Cheyenne, I first scraped my peach fuzz with a Fat Boy and Blue Blades, but quickly, as the company knew I would, transitioned to the improved Thin and then stainless steel blades.  But I continued to use my trusty adjustable razor, enjoying the satisfactory heft of its feel in my hand long after many others had abandoned double-edged razors for the new two-bladed Aftra models in the 1970’s. 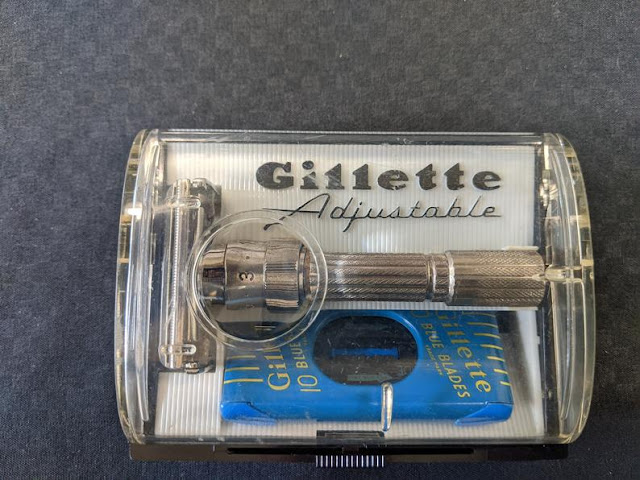 1960 packaging for a Gillette Fat Boy adjustable razor with Blue Blades in safety dispenser.   This was my first razor and I used it for years with improved blades.


Since then, the company has introduced improved, or allegedly improved, razors almost annually.  Cartage heads swiveled to follow the contours of the face, blades multiplied to three, four, then five.  Lubricant Teflon strips were added as were soft plastic flutes said to raise the beard stubble.  A single blade was added to the opposite side for use in square trimming sideburns.  With each improvement, packages of blades leapt in prices.  A half-dozen blades could top $30 at the store.

Those prices led to a challenge to Gillette’s long-time business model.  Harry’s and other companies began producing basic four-blade cartridges with lubricants that could fit a Gillette handle or their own in plants in Germany and elsewhere and marketing them by mail-order subscription at less than half the cost of Gillette.  Sales were brisk and began to deeply cut into the old company’s market.  They did not stop producing improved models, but in 2019 began selling a basic blade package like Harry’s for competitive prices at retail stores.  I switched to them and found them even better than the fanciest of the recent improvements.

The Gillette Company continued to thrive and sell products under a variety of brand names including Gillette, Braun electric shavers, Oral-B toothbrushes, and Duracell batteries. In 2005, the Gillette company was sold to Procter & Gamble for $57 billion. It is now known as Global Blades & Razors, with the Gillette brand, a business unit of Procter & Gamble. 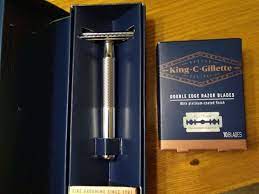 
You can still buy original Blue Blades, but in recent years they have been used mostly as cutting blades in various tools.  Recently double-edged adjustable razors have become something of a retro fad.  Procter & Gamble recognizing a niche created a new King C. Gillette brand and is marketing high-end razors, blades, and other shaving products.