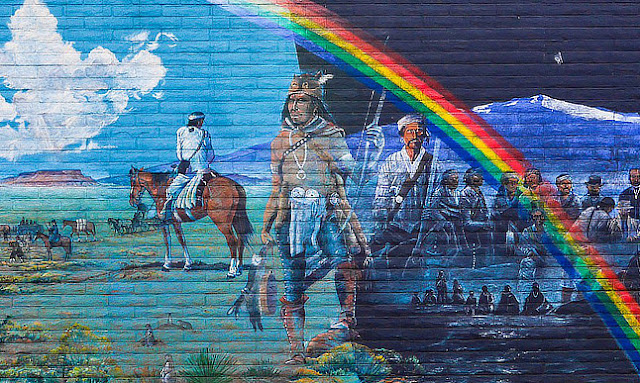 This 2014 mural by Richard K. Yazzir commemorates the Cherokee Trail of Tears and the Long Walk Home some members of the nation made from their new settlement land in Indian Territory (today's Oklahoma) back to their homelands in the Carolinas, and Georgia.  In Illinois and Wisconsin members of the Sauk and Fox tried tried to return to their hunting grounds from reservations in Iowa but were defeated and expelled again after the Black Hawk War.

November is Native American Heritage Month in the United States.  The designation was inspired by the false narrative of the First Thanksgiving myth and in recognition of the true history of the genocidal displacement of aboriginal peoples and nations by the European settler invasion and conquest. 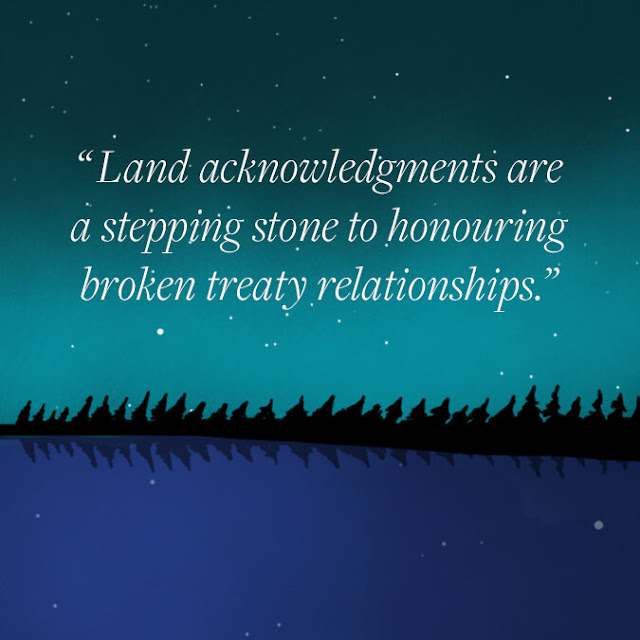 The Unitarian Universalist Association, like many progressive religious bodies, has been moved to acknowledge that history.

The enormous wealth of the United States is based on the theft of Indigenous land and the enslavement of people of African descent. In order to maximize wealth, the colonizers sought to eliminate or minimize the number of people who could claim their Indigenous rights to land, natural resources and sovereignty. These attempts are ongoing and have included genocide, forced removal, forced assimilation and the more contemporary systemic erasure of Native people through invisibility in education, media and pop culture.

Millions of Indigenous people and hundreds of Indigenous nations have resiliently survived 400 + years of systemic and violent attempts to eliminate them, only to be rendered invisible by white supremacy culture and institutions which pretend they no longer exist. They continue to assert their sovereignty, and their rights and relationship to their homelands, natural resources, culture and spiritual practices. They continue to lead efforts across this country to protect life itself, which depends upon the protection of the land, the water and the air. Indigenous people are still here and their lands are still occupied. 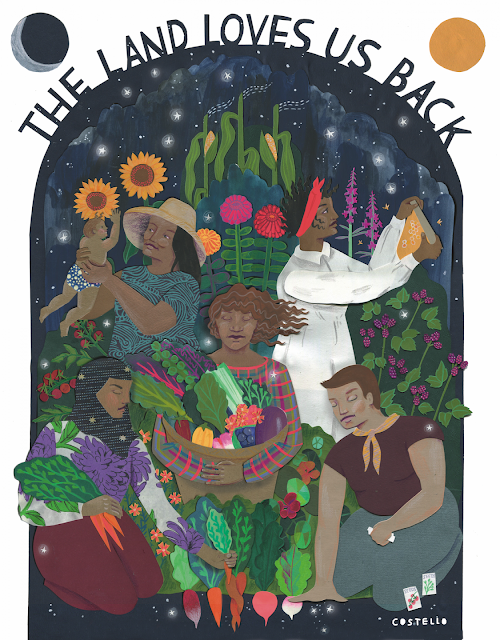 We are all sustained by the earth, waters, and air.  Illustration by Molly Costello.

Part of the response is encouraging the use of Land Acknowledgement statements at the beginning of gatherings, meetings, and Congregational worship.  In that spirit I created an Acknowledgement prayer that was used as a Chalice Lighting last November at a meeting of the Tree of Life Social Justice Team.  I adapted material from the fine resources provided by the UUA and our near neighbors at Countryside Church Unitarian Universalist in Palatine who created a litany of the peoples who lived on or used the land in our area.  Note that just prior to European settlement in Northeastern Illinois native tribes had few permanent villages in the area, but it was widely used as a hunting and trading area by many.

A similar acknowledgement is now used at all Tree of Life worship services. 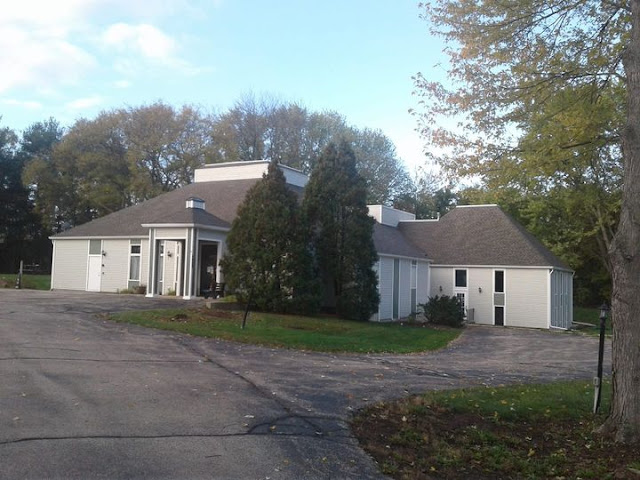 Tree of Life's building in McHenry --the lovely acreage it occupies was stolen from the Native peoples here after the Black Hawk War of 1832.

As we begin, we take this moment to acknowledge that Tree of Life occupies land in what was the unceded territory of indigenous peoples.  As community and church members, we continue to benefit from the seizure and occupation of this land. We also want to affirm that this is not simply performative but is deeply felt and is a commitment toward action.

We also acknowledge the plants, animals, water, and the very earth itself that sustained them and ourselves.

We are grateful for our undeserved grace and affirm our duty to be restorative.