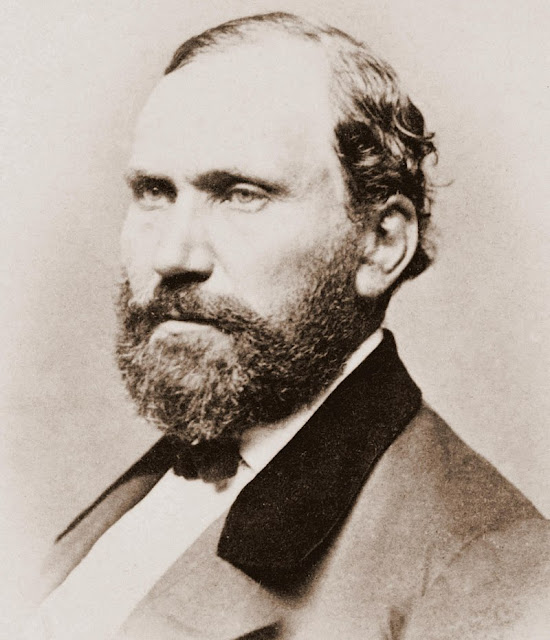 Allan Pinkerton in 1861 as he gained fame a Lincoln's protector and secret agent.

Allan Pinkerton, America’s first detective and the founder of the security company that still bears his name was born on August 25, 1819 in Glasgow, Scotland.  Admired as a hero to some, he was despised by generations of workers as a union buster and scab herder.

Pinkerton started as a class conscious working man.  The son of a duty disabled policeman, he apprenticed as a cooper and participated in the Chartist movement to obtain the franchise for working men and other political reforms.  Chartist “riots” were violently suppressed by troops in many cities.

Newly married and deeply disappointed by the failure to achieve the vote, Pinkerton decided to immigrate to the Canada at the age of 23 in 1842.  He and his wife were shipwrecked off Nova Scotia and came ashore penniless with only the clothes on their back.  A friend tipped him off to a job at a Chicago brewery.  He worked at his trade there for five years before relocating to rural Dundee, Illinois nearly fifty miles northwest of the city.

He apparently wanted to go into business providing oak wood from the abundant local woodlots to the brewery but reportedly accidentally stumbled on a ring of counterfeiters, which he reported to local authorities.  In those days when each bank issued their own paper notes, counterfeiting was a common crime.  Several well organized gangs found the remote farmsteads of recently settled Kane and McHenry counties—good places to set up operations far away from police but close enough to the city to get their bad paper quickly into circulation.

Pinkerton began using disguises, false identities and other tricks to track down counterfeiting gangs.  He was appointed a part time deputy sheriff and later began to work on contract for the banks whose notes were being counterfeited.  Pinkerton thought he had found a niche and a home.

But he also supported the Underground Railway which used the rural area as a transportation path for the same reasons as it was chosen by the crooks.  His known abolitionist sentiments led to a crushing electoral defeat in a run for local office.

But his daring exploits chasing counterfeiters had been picked up in the popular press.  He packed up his new reputation and returned to Chicago where he hired himself out as a freelance detective.  Among his customers were the Treasury Department in the pursuit of more counterfeiters and the Cook County Sheriff, who hired him to locate two girls who had been kidnapped and taken to Michigan.  He found the girls and shot one of the captors, making headlines for his daring do.

The Sheriff hired him as a full time detective—the first such officer in any Illinois police agency.  He also continued to take private clients on the side.

Pinkerton's "seeing eye" became one of America's first and most recognizable company logos.


In 1855 he formed his own private agency, the North-Western Police Agency, soon to become The Pinkerton National Detective Agency. Its famous logo was an All Seeing Eye with the motto “We never sleep”—thus the origin of the term private eye.  Pinkerton quickly built a large operation with many operatives who were trained in surveillance and under-cover operations.  He demanded his operatives keep detailed records of their cases and on all known criminals they encountered.  He kept the records, including descriptions, aliases, known associates, and modes of operation of hundreds of criminals.  He even became the first to use photographs to identify suspects.  No other private law enforcement agency and few public ones had anything like the manpower or sophistication of Pinkerton’s operations.

Among the frequent customers of the new agency were the railroads, which is how Pinkerton came the attention of a railroad lawyer and politician, named Abraham Lincoln.  Pinkerton’s steadfast support of the Republican Party didn’t hurt either.  Lincoln tapped Pinkerton to assist his personal friend and bodyguard Ward Hill Lamon for security as he made his way from Illinois to Washington for his inauguration.  Pinkerton operatives uncovered a plot by Confederate sympathizers to kill Lincoln as he changed trains in Baltimore and allegedly foiled the attempt by sneaking the lanky Lincoln through town disguised as an old woman. 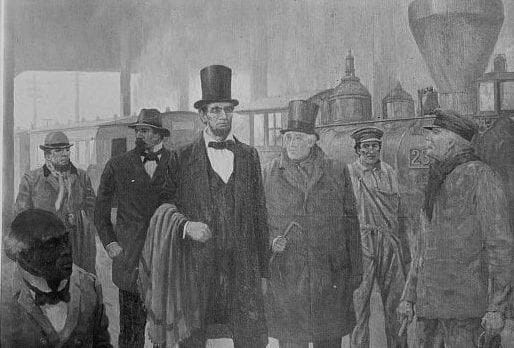 Pinkerton, rear and Lincoln's friend and bodyguard Ward Hill Lamon with the goatee escorted President elect Lincoln on his perilous journey by train for the 1861 inauguration.


As the Civil War erupted, Lincoln learned to his chagrin that the Army had no real intelligence service.  He tapped Pinkerton to become the first head of the new Intelligence Service, forerunner of the U.S. Secret Service.  Pinkerton deployed his operatives behind the lines, often disguised as Confederate soldiers and employed various tipsters.  He personally went on some missions in enemy territory using the name Major E.J. Allen.  He was very close to another old acquaintance from the Illinois Central Railroad, General George McClellan.

Unfortunately, Pinkerton consistently overestimated the size of opposing Confederate forces by as much two times their actual numbers.  That caused the cautious McClellan to avoid battle with the main Confederate forces when possible while demanding ever more men and arms for the President.  Military historians agree now that had McClellan moved his vastly larger and better equipped army more quickly and with greater determination to follow up on successes, the war could have been significantly shorter. 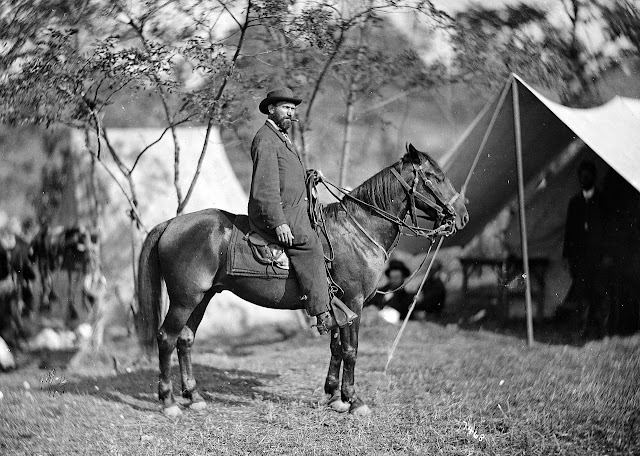 
Eventually Lincoln grew tired of both McClellan’s dithering and Pinkerton’s exaggerations.  Pinkerton left the Service after 1862, but his agency continued to contract with the government for numerous intelligence operations through the rest of the war.

In post war years Pinkerton’s agencies pursued gangs of bank and train robbers, most notoriously Missouri outlaws Frank and Jesse James.  The Pinkerton Agency got a public black eye when its men threw a bomb killing a child and blowing the arm off the James boys’ stepmother.  After an operative who got a job working on an adjacent farm was discovered and killed, Pinkerton withdrew from the case.  He considered it the biggest failure of his career. 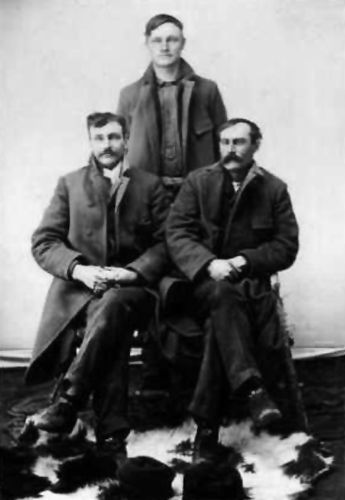 Pinkerton range detectives like these played a bloody roll in range wars between Western cattle barons and small ranchers and homesteaders accused of rustling cattle.


Soon rapid post war industrialization led to growing labor unrest.  Pinkerton, the former Chartist, had no trouble enlisting his men as strike breakers and spies against unions.  One of the most famous early examples was the infiltration of the Molly McGuires, a secret organization of Irish miners in the Pennsylvania anthracite coal fields by Irish-born operative James McParland.  Identities of Molly leaders and members were passed to local employers who employed vigilantes, who may or may not have included other Pinkerton men, to ambush and kill them and their families.  McParland’s testimony in court also led to the execution of six men and the destruction of the Molly McGuires. 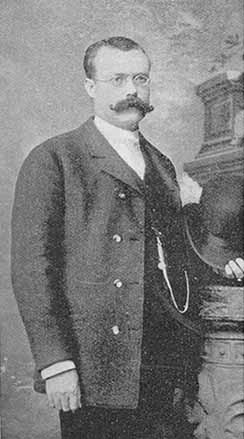 Pinkerton detective James McParland infiltrated the Molly Maguires in the Pennsylvania coal fields sending several to the gallows.  He had a long career with the agency and years later arranged for Big Bill Haywood and Charles Moyers of the Western Federation of Miners to be kidnapped from Colorado to stand trial in Idaho on bogus charges of planting a bomb that killed a former governor.


McParland was rewarded with rapid promotion through the company ranks and specialized in labor cases.  Twenty years later he kidnapped Big Bill Haywood, Charles Moyers and other leaders of the Western Federation of Miners from Colorado and took them on a sealed train to Idaho where they were put on trial for the bombing murder of a former governor. 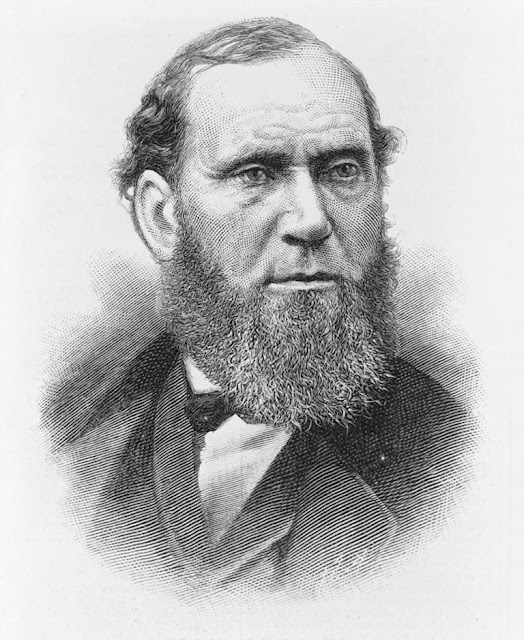 Pinkerton in a Harper's Weekly illustration shortly before his death.


Pinkerton died in Chicago on July 1, 1884 at the age of 64.  He fell on the pavement and bit his tongue.  It became infected and he died in agony.

By that time a huge amount of his company’s business was anti-union activity.  Company agents were involved in the gun battle with striking steelworkers during the Homestead Strike of 1891, suppressing the Pullman Strike of 1894, and in the infamous Ludlow Massacre of 1914 to list only a few of the most infamous cases.

The agency also was hired by foreign governments to suppress local radicals, most famously by Spain to work against nationalists in Cuba who included the abolition of slavery as one of their top goals. 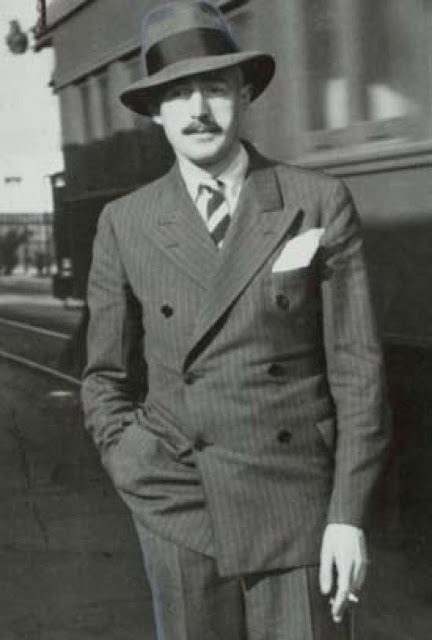 Dashiell Hammett, the inventor of tough guy detective fiction based his character the Continental Op on his experience as a labor spy in Butte, Montana.  He may have been involved in investigations that lead to the lynching of legendary IWW organizer Frank Little.  The bitter experience made him a life-long radical.


Dashiell Hammett became a young Pinkerton operative before World War I and became so disillusioned by the anti-union work he was called on to do, including work that may have led up to the lynching of Industrial Workers of the Word (IWW) organizer Frank Little in Butte, Montana, that the famous creator of hard-boiled detective fiction dedicated much of the rest of his life to supporting radical causes.

In the 1930’s a Senate Committee led by Wisconsin Progressive/Republican Robert M. La Follette, Jr. investigated the Pinkerton Agency for its systematic use of spies to infiltrate labor unions.  To this day Pinkerton is a curse word to unionists and the company is still used to protect scabs and harass picket lines.

In 1999 the Pinkerton Agency and was acquired by the Swedish based international security firm Securitas AB.  It merged with its chief rival, the William J. Burns Detective Agency, in 2001.  Today it operates as an American subsidy of the Swedish firm under the name Pinkerton Consulting and Investigations.  And the work goes on.

Posted by Patrick Murfin at 5:35 AM