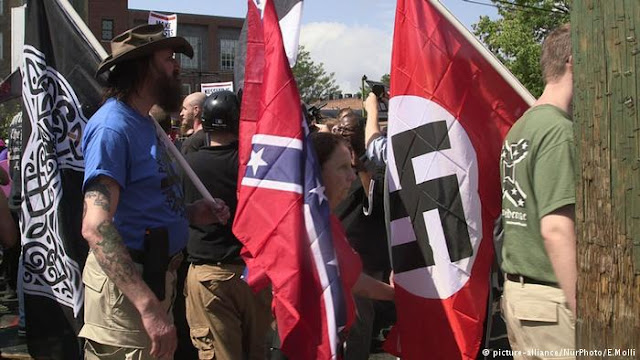 Neo-Nazis and Klansmen were among those who flocked to the United the Right rally and march in Charlottesville, Virginia in 2017.

Yesterday was the fourth anniversary of the clashes in Charlottesville, Virginia when a Unite the Right Rally supposedly in defense of “sacred” Confederate monuments faced off against anti-racist and, yes, anti-fascist counter demonstrators.  Klansmen, neo-Nazis, self-appointed patriot militia, Proud Boys, and Two Percenters strutted their stuff carrying tiki torches and shouting slogans like “We will not be replaced!”  The right wingers taunted and attacked peaceful counter protestors and avowed black clad Anti-fa fought back.  Police either stood aside or sometimes seemed to cooperate with the thugs.  Scores were injured in street fighting, and 32 year old Heather Heyer was killed when a car rammed through a crowd of anti-racists trying to block the path of the white nationalist marchers.

In some ways the events in Charlottesville were a preview of the insurrectionary siege of the Capitol on January 6 which included members of many of the same groups urged on by the same leaders.  And lest we think the threat has passed just this week Proud Boys, Trumpist fan boys, and Christian dominists came to Portland specifically to attack Black Lives Matter supporters and the Anti-fa who have long been a fixture in that city.  Two days of street brawls went on as the local police again stood aside.  Police there have been defiant of city leaders who have been trying to heal wounds from violent clashes last year. 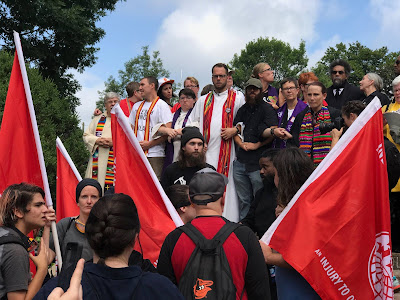 Anarchists, anti-fa, and members of the Industrial Workers of the World, (IWW) defended and protected clergy attempting to block White nationalist from their rallying point around a statue of Robert E. Lee.  The Black public intellectual Cornel West--seen upper right in the suit and sunglasses--bluntly reported that the Anti-fa "saved our lives."

The day after the Charlottesville confrontations, I spoke at a hastily called community vigil at the Tree of Life Unitarian Universalist Congregation in McHenry.  After remembering the blood sacrifice of anti-fascist hero Heather Heyer, I said that it fell to me to be the voice of anger and outrage.  I was not there to lead a chorus of Kumbaya.  I recalled that earlier in the day I had read remarks by Black scholar and activist Cornel West who was with religious leaders on both Friday night when the marching Nazis threatened the church where they gathered and on Saturday when they placed themselves around the scheduled park rallying point to block access to the Unite the Right marchers.  The ministers were confronted and menaced with imminent attack unprotected by police who had withdrawn. “The antifascists, and then, crucial, the anarchists, because they saved our lives, actually. We would have been completely crushed, and I’ll never forget that.”  West said.  These are the same anti-fascists that the Cheeto-in-Charge and far too much of the media held to be equally guilty for the violence. 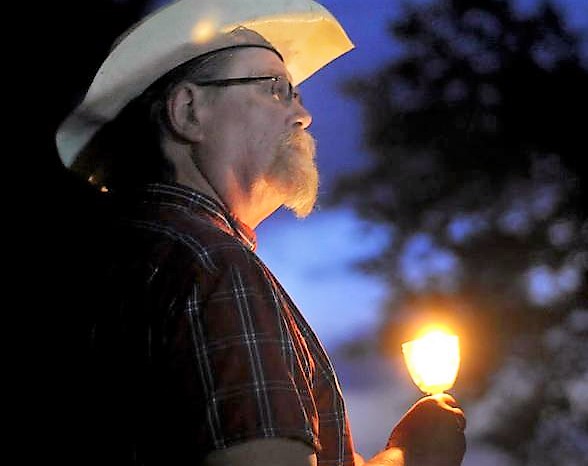 The Old Man at the roadside candlelight vigil following the rally on the ground of the Tree of Life UU Congregation in McHenry where more than 200 gathered on short notice.

Then I read this:

So is this how it felt on the streets of Munich

when the strutting Brown Shirts

in their polished jackboots,

in their cloth caps

and shirtsleeves rolled up

and battled in the beerhalls,

All of the good people, the nice people

and wished it would go away—

all of the liberals, the Catholics,

the new-bred pacifists of the Great War,

the professors and doctors,

who had not gone Red—

a pox on both your houses they solemnly intoned.

in brilliant color not grainy black and white

and the Fascists can’t agree on a

Boy Scout uniform and array themselves

But the smell, you know, that stench,

is just the same.

The question is—do you dare be a Red today

or will you close your doors

and go back to your game consoles

Which will it be, buddy?