Music, Mud, Memory, and Myth at The Woodstock Festival

The crowd and stage at Woodstock.  Feel free to circle yourself if you were there.

A certain song said, “By the time we got to Woodstock/We were half a million strong.”  By last count 24,794,612 aging Baby Boomers have claimed at one time or another to attend the Woodstock Music & Art Fair which opened on August 15, 1969 on Max Yasgur’s farm in Bethel, New York.  But then it was written by Joni Mitchell who missed it herself because her agent didn’t want her to miss an appearance on the Dick Cavett Show.

Like Joni, I didn’t get to Woodstock either.  I was working a third shift printing daily employment listings for Illinois Unemployment offices and was helping organize on the People’s Park Project at Halstead and Armitage as a new member of the Chicago Branch of the Industrial Workers of the World (IWW).  Of course, when I found out what I had missed, I, too, wished I had been there.

Two rich young guys, John Roberts and Joel Rosenman took out ads in the New York Times and Wall Street Journal which read, “Young men with unlimited capital looking for interesting, legitimate investment opportunities and business propositions.”  It attracted the attention of and Artie Kornfield who came up with an idea to build a world class recording studio in rustic Woodstock, New York were artists like Bob Dylan and The Band were already living.  As discussions evolved, the idea of a festival to promote the studio and maybe featuring some of those local luminaries began to emerge. 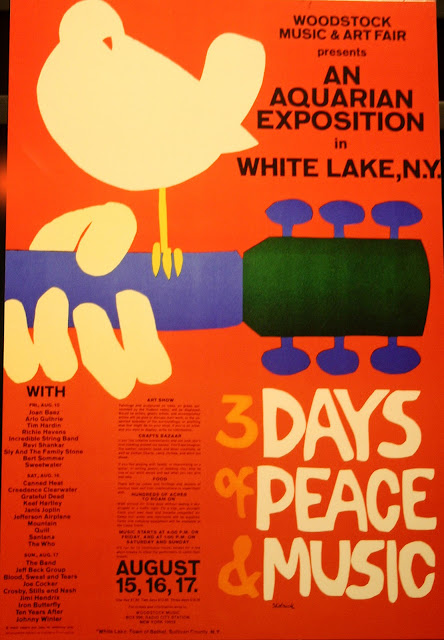 As envisioned it was a much more modest event than it became.  But, in a series of legendary steps and missteps it evolved into something unique.  After having trouble recruiting top acts, Creedence Clearwater Revival agreed to play for $10,000—a steep fee but one which signaled to other top acts that the festival would be worth doing.  Leading rock and roll acts, including the cream of the San Francisco psychedelic scene and one huge British Invasion group, The Who, were joined by folk music legends like Joan Baez and Arlo Guthrie.

Planned as a for-profit program, tickets went on sale in New York City area record stores and by mail for $18 a day or $24 for all three—fairly steep prices at a time when top concert tickets sold for less than $5 at most venues.  But sales were brisk.  186,000 were sold in advance and the promoters began to believe that as many as 200,000 would attend.  They could foresee a nice profit.

This, however, far exceeded the 50,000 that promoters had told officials in Wallkill, where they had leased land in an industrial park.  Alarmed local residents protested voraciously. The town board voted in mid-July to require that gatherings of more than 5,000 have a permit and then officially denied the organizers’ application on the ground that port-a-potties would not meet local code.

Scrambling to find an alternative, promoters found Bethel motel owner Elliot Tiber who had a permit already for another event and who offered the use of 15 acres behind his business.  A local real estate agent recommended Max Yasgur, whose farm abutted Tiber’s property with a gently sloping hillside that would make a natural amphitheater for a stage set up at the bottom in front of a pond.

The Bethel Town Clerk and Supervisor approved permits for the event, but the board refused to issue them and ordered the clerk to post stop work notices on the site.  But it was too late, despite local alarm, early arrivals began coming into the area more than a week in advance. 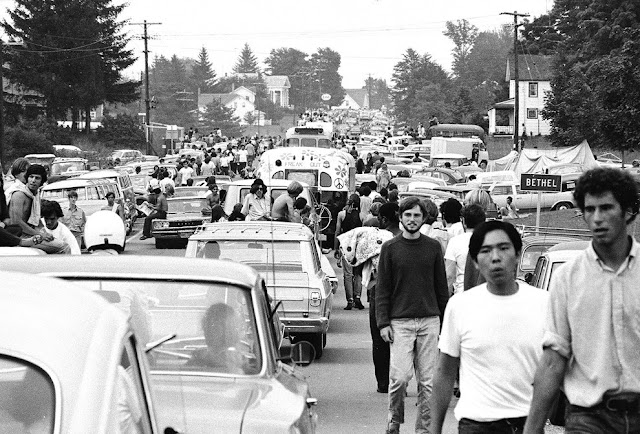 Traffic jams to the festival were so bad that many abandoned their cars on the road and walked for miles.


The underground press and progressive rock radio stations were spreading the word far and wide.  Everyone realized that far more people than expected would show up.  The organizers had to decide to try reinforcing fencing at the site to maintain a ticket for admission policy or put their resources into finishing the large and elaborate stage and sound systems which were behind schedule.  They decided that fencing and security could lead to violence, as could the cancellation of the festival because the stage was not ready.  They opted for the stage.

By August 14 roads to Bethel were becoming clogged and the crowds thick.  The fence was cut.  Like it or not for most Woodstock would be a free festival. 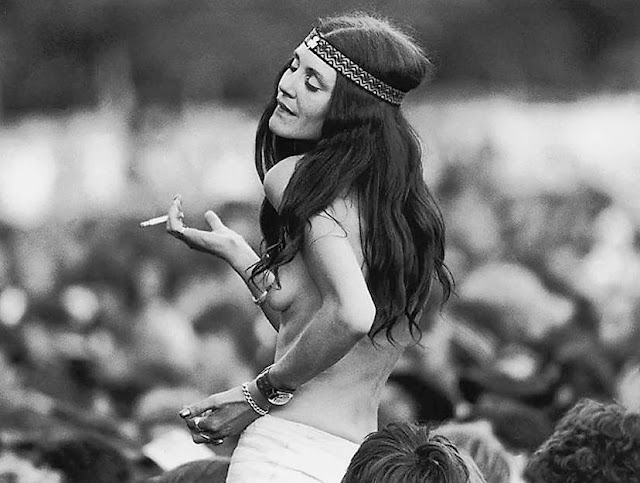 The Woodstock Festival of our imagination.


The enormous crowds and the traffic snarls became a media event by themselves as network TV ran footage from helicopters of the hordes of hippies descending on the rural village.  Rather than discourage people, reports set even more on the road to join in what was being recognized as something astonishing.

Torrential rains before and during the concert transformed the fields to seas of mud.   Conventional camping became impossible.  Shortages of food and water became critical.  The Hog Farm commune set up a free feed operation featuring brown rice and some vegetables.  Local residents took pity on the bedraggled hippies and made thousands of peanut butter sandwiches to be handed out. 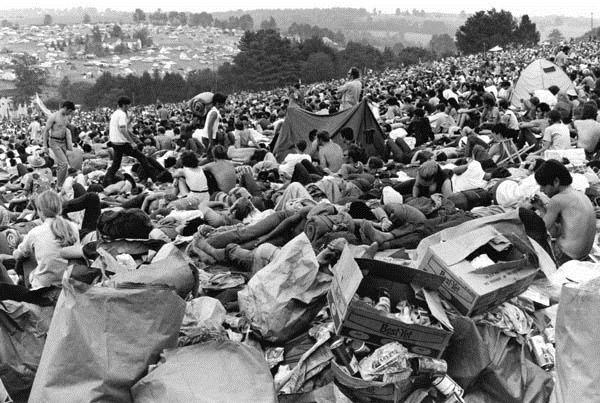 The Woodstock experience for most--mud and garbage far from the stage.


There was no shortage of drugs.  Marijuana smoke hung like a haze over the crowd and LSD, including the famous bad brown acid that Hog Farmers warned about from the stage, was plentiful.  So, evidently was heroin, which resulted in at least one fatal overdose.

Despite the hardship, the crowd remained peaceful and legendarily mellow.  From the first act, Richie Havens, to the last, an almost unknown guitarist named Jimi Hendrix, the music was spectacular.  Most of those in attendance even remember it, at least after their memories were refreshed by Woodstock: 3 Days of Peace & Music, the landmark 1970 film directed by Michael Wadleigh and edited by Thelma Schoonmaker and Martin Scorsese, or by the multi-disc record albums that were released. 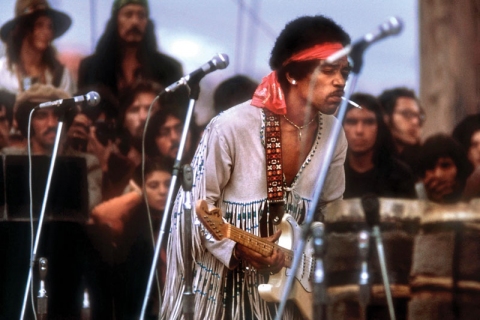 Jimi Hendrix who closed the show and Crosby, Stills, and Nash who debuted there were the festival's break-out stars.  Bob Dylan and the Band never signed on.  Janis Joplin and The Who turned in legendary performances.  An irritated Pete Townsend broke a guitar over Abbie Hoffman's head for making a political speech.


Joni Mitchell penned the memorial ditty which became an anthem hit for Crosby, Stills and Nash, the super group which debuted at Woodstock.

The festival also boosted the careers of several other participants, none more so than Hendrix, who vaulted overnight to super star status.

As for the organizers, they lost their shirts, at least at first.  They were deluged by unpaid bills and over 80 lawsuits.  Eventually revenue from the movie paid off all debts, but none of the original partners, now feuding among themselves, made any money.

They, like their event, however, became legendary—even heroic—in later books and in the interesting 2008 film Taking Woodstock by Taiwanese director Ang Lee. 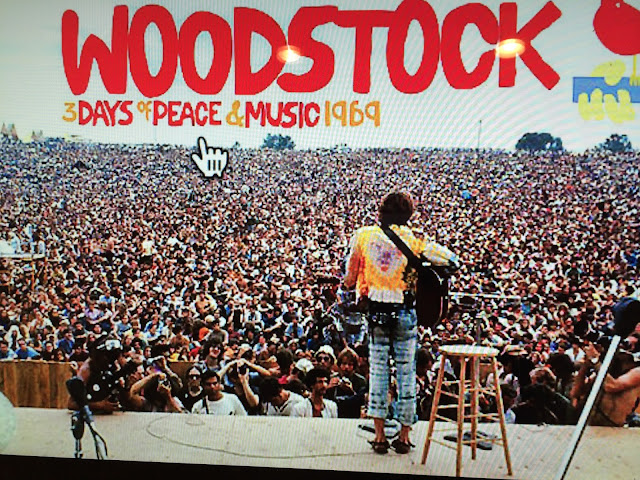 John Sebastian, formerly of the Lovin' Spoonful, on stage in 1969.  He did more than anyone to make tie dye a hippy fashion trend.  Fifty years later he signed on for the ill fated anniversary concert.


In 2019 Michael Lang, one of the original promoters who lost his shirt on the festival, tried to cash in on nostalgia by staging Woodstock 50 with big name current rock, rap, and pop acts and a couple of surviving artists from the original festival, Country Joe McDonald and John Sebastian.

Things began to unravel almost from the start.  Lang lost his principle financial backer, Dentsu Aegis who tried unsuccessfully to cancel the event.  Then production partner Superfly dropped out a few days later.  Permits could not be obtained for the originally announced venue—the Watkins Glenn Raceway in upstate New York and the Town of Vernon near Utica.  By July most of the originally announced main acts including Jay-Z, Miley Cyrus, Santana, the Lumineers, and Dead and Company dropped out.  Finally, a last minute scramble to recast the festival as a voter registration event and a fundraiser for environmental groups, at a much smaller venue, the 15,000 seat Merriweather Pavilion in the Maryland suburbs of Washington, D.C. also collapsed.  Lang threw in the towel in a press release issued on July 31. 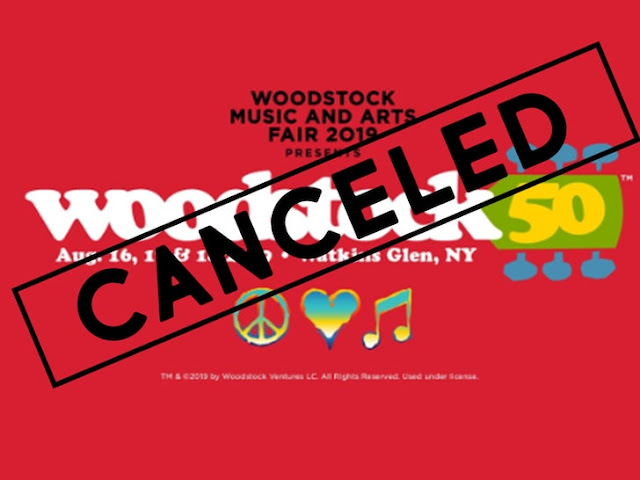 
The golden anniversary did not go uncommemorated, however, near its original home in Bethel.  The town held a string of events centered on the Bethel Woods Center for the Arts on the site of Max Yasgur’s farm.  Events included a sold-out Arlo Guthrie performance and Woodstock documentary screening on August 15; concerts by Ringo Starr on the 16th, John Fogarty on the 18th, and Santana on the17th, as well as art exhibitions, craft shows, and panel discussions.

The festival was celebrated with a new PBS documentary, Woodstock: Three Days that Defined a Generation. 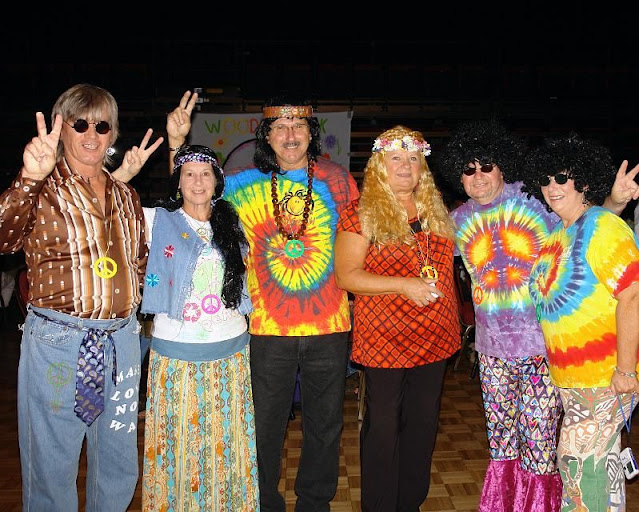 Old hippie nostalgia--playing dress up in outfits they never really wore.  They can afford to hit the local cannabis dispensary for pricy legal pot.


Meanwhile aging hippies whether they actually made it to Woodstock or not fifty-two years ago or not, are putting on tie-dye, and digging out their old albums or copies of the movie.  And yeah, a lot of them will toke up, too.  It’s even legal now in many states which might take a little off the rebellious thrill.