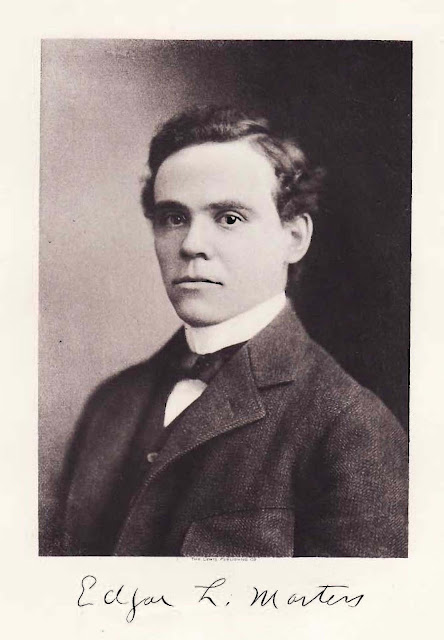 Edgar Lee Masters was the author of one of the greatest single volumes of American poetry ever—The Spoon River Anthology.  That book in which the denizens of a small 19th Century Illinois village graveyard tell their stories, is still a shock and an eye opener for anyone who bought into the Disney version of small town life as a kind of perfect idyll.

Masters was born on August 23, 1868 in Kansas where his father had briefly established a law practice.  When that failed the family moved back to his grandparents farm near Petersburg in Menard County, Illinois.  In 1880 the family moved again to nearby Lewistown where the boy attended high school and showed an interest in both writing and following his father’s shaky footsteps in the law.  He had his first publication in the Chicago Daily News—a Democratic challenger to the dominance and hegemony in the state of the Republican Chicago Tribune. 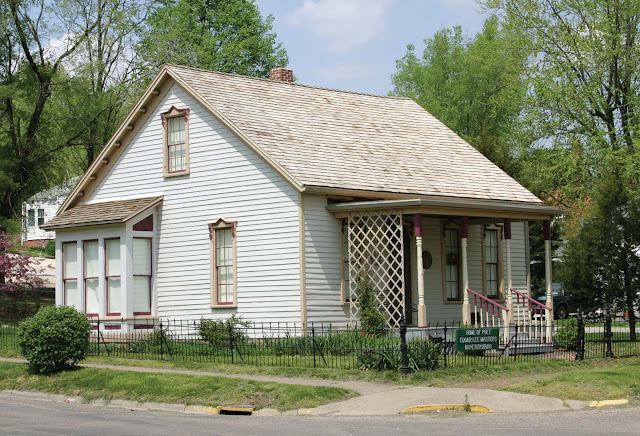 Masters' modest boyhood home in Petersburg has been preserved.

In the late 1880’s he attended Knox Academy, the prep school for Knox College but was forced to drop out when his family could no longer support him.  After that he read law at his father’s office.  His dad was the village Freethinker and thus something of an outcast.  The practice revolved around the margins of local life, petty civil cases for those who could not afford the lawyers who hobnobbed with the judges and bankers, criminal cases, divorces, anything that exposed the underside of the community.  It was an eye-opening experience.

After passing the Bar, young Masters hot footed it out of town to Chicago in 1893 where he hoped to advance both his legal and writing careers. He went into practice with Kickham Scanlan and began to publish poetry under the name Dexter Wallace.

In 1898 he married the daughter of a prominent lawyer and began a family that grew to three children including a daughter Marsha who grew up to be a poet and a son Hilary who became a novelist.  But the union grew stormy due to Master’s extramarital affairs. 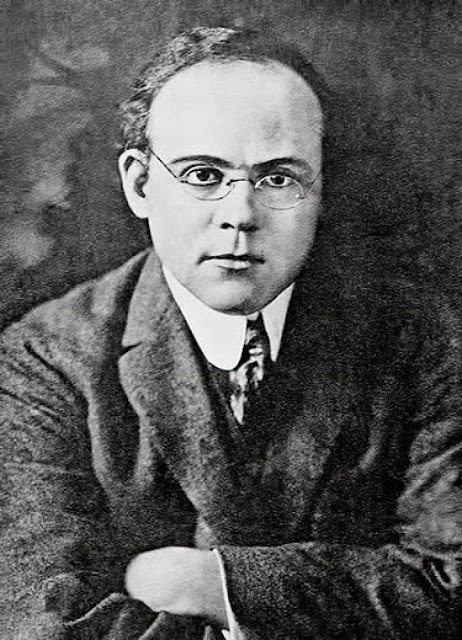 In 1903 Masters went into partnership with Clarence Darrow, already noted as a top labor and defense attorney.  They were united in their Democratic politics, instinctive radicalism, Freethought, and admiration for the labor Democrat hero, Governor John Peter Altgeld.  As a junior partner in the firm, Masters handled mostly routine criminal and civil cases for the poor, often pro bono.

Despite an amicable beginning, the partnership foundered in 1908 and formally broke up in 1911 due to a business dispute with Darrow and a messy, scandalous marriage.    Despite the bitter personal falling out, he remained an admirer of Darrow.

Masters published two little noted volumes of poetry under pen names in 1898 and 1910.

During his hiatus from the active practice of law as his partnership with Darrow disintegrated he began work on writing and polishing poems inspired by his hometown.  In 1914 he began to publish these in Reedy’s Mirror out of St. Louis under another nom de plume, Webster Ford.  A year later the poems were collected and issued as The Spoon River Anthology with the assistance and encouragement of Harriet Monroe of Poetry Magazine to instant critical and popular acclaim. 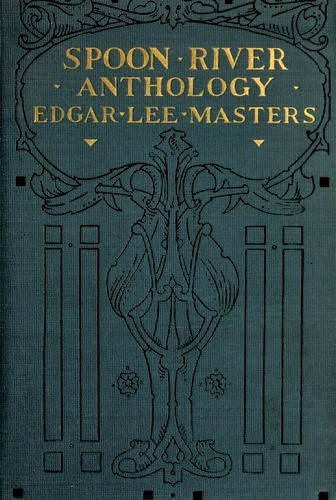 Suddenly the obscure lawyer was famous.  He gradually wound down the practice of law to concentrate on a literary career.  Although he was embittered in old age that none of his subsequent work got the attention of that classic, he produced prolifically and with great skill.  In all there were 19 more volumes of verse including a sequel The New Spoon River, 12 plays, 6 novels, and 7 biographies.  Among the subjects of his biographies were fellow Illinois poet Vachel Lindsay, Mark Twain, and Walt Whitman to each of whom he owed a debt of gratitude.

His 1931 bio Lincoln the Man was a highly controversial self-proclaimed de-mythologizing of the Prairie President.  In part it was a direct refutation of fellow Illinois poet Carl Sandburg’s lyrical and lionizing biographies.  His jealousy of Sandburg was well known, but he seems to have been most influenced a loyalty to the Democratic Party of the 19th Century which was already vanishing outside the Deep South.  He pictured Lincoln as a Whig tool of the banks and railroads from the beginning in service to concentrated wealth against the common man.  He was pictured as tyrant who rushed the country into an unwanted war to the applause of Eastern elites.  The book was a popular success in the South, but it virtually destroyed his own reputation with the liberal literary establishment, many previously admiring critics turning against his whole body of work. 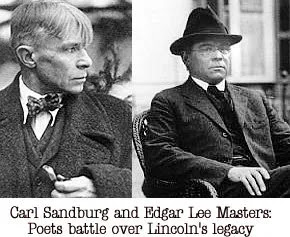 
He had quit the practice of law entirely by 1920 and moved to New York to concentrate on writing.  Masters finally divorced his first wife in 1923 years after abandoning the family.   In 1926 he married Ellen Coyne with whom he had another son, Hardin.

Although Masters won plaudits and honors including the Mark Twain Silver Medal in 1936, the Poetry Society of America medal in 1941, the Academy of American Poets Fellowship in 1942, and the Shelly Memorial Award in 1944 he never matched the fame and glory of his contemporary Carl Sandberg and often felt snubbed the Eastern and academic poetry elite.  He was not experimental enough to be ranked with the Imagists and modernists. 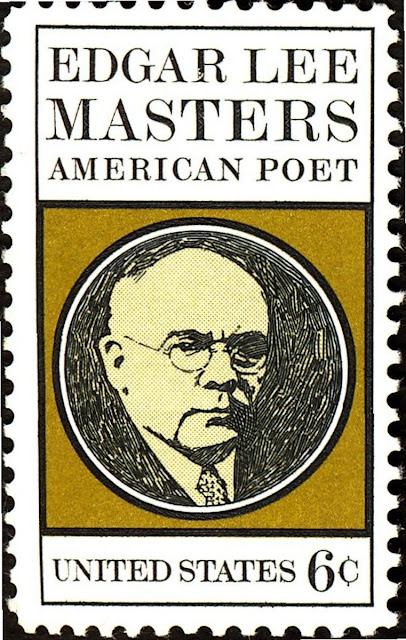 However damaged Masters's reputation was at the time of his death, The Spoon River Anthology remained one of the most beloved volumes of American poetry and the writer was honored by U.S. postage stamp in 1970.

He died March 5, 1950, in a convalescent home near Philadelphia and was buried back home in Petersburg in the cemetery that inspired his greatest book.

Here are samples of Masters’ work.  First from The Spoon River Anthology:

Jim Brown was the trainer of a famous trotting horse, Dom Pedro.

While I was handling Dom Pedro

(Like Rile Potter used to sing it over at Concord);

For cards, or for Rev. Peet’s lecture on the holy land;

For skipping the light fantastic, or passing the plate;

For Pinafore, or a Sunday school cantata;

For men, or for money;

For the people or against them.

Went to the Village trustees,

And asked them to make me take Dom Pedro

From the barn of Wash McNeely, there at the edge of town,

To a barn outside of the corporation,

On the ground that it corrupted public morals.

They thought it a slam on colts.

Masters was not so down on Lincoln in those days as reflected in one of the most famous pieces from the collection.  Ann Rutledge’s grave, not far from the poet’s, is now marked with this poem.

Out of me unworthy and unknown

The vibrations of deathless music;

“With malice toward none, with charity for all.”

Out of me the forgiveness of millions toward millions,

And the beneficient face of a nation

Shining with justice and truth.

I am Anne Rutledge who sleep beneath these weeds,

Beloved in life of Abraham Lincoln,

Wedded to him, not through union,

From the dust of my bosom!

And finally, from a later collection a glimpse of the restless soul, the Freethinker taunted by a spiritual yearning he barely understood.

Give me strength to endure

The gifts of the Muses,

When the sky is blue as Minerva’s eyes

When the sea sings to the rising sun

Let me be unafraid;

Through the light of afternoon,

An unloosened fountain of rapture,

Keep my heart from spilling

When at the dawn

The dim souls of crocuses hear the calls

Give me to live but master the loveliness.

Keep my eyes unharmed from splendors

And my ears at peace

Filled no less with the music

Of Passion and Pain, growth and change.

Reckless of my mortality,

Strengthen me to behold a face,

To know the spirit of a beloved one

Yet to endure, yet to dare!