Texas Could Really Use Molly Ivins Now—So Could We All 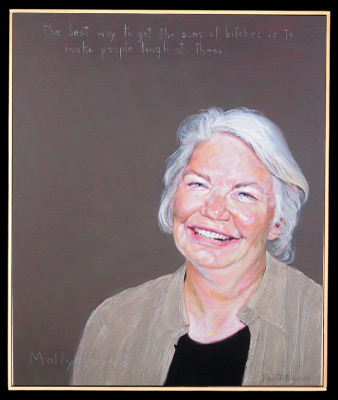 Molly Ivins, the extraordinary newspaper columnist, wit, and the enemy of foolishness, vanity, and avarice at every level of government, was born on August 30, 1944 in Monterey, California.  But she was raised in and around Houston, Texas and was a passionate Texan all her life from the tip of her head to the paint on her toenails.

Her father was an autocratic oil company executive and she grew up in privileged circumstances.  At her tony private prep school she wrote for the school paper and enjoyed performing in stage productions.  Whatever she tried her hand at was pursued with the ardor of her admittedly big personality.

Molly Ivans as a young reporter, left, and a student editor, right.

After an unhappy freshman year at Scripts College, she transferred to Smith, a Seven Sisters college that brought her close to the love of her life, Yale student Henry “Hank” Holland, Jr.  When he was killed in a motorcycle accident in 1964, Ivins was crushed.  She never found anyone who would measure up to his memory and stayed single the rest of her life, dedicating herself to her studies and career.  After a year of study in Paris, she graduated in 1966 and went on to earn a master’s degree at Columbia Journalism School the next year.

Her first job was with Minneapolis Tribune.  After a stint as the first female police reporter in the city, she covered a beat called Movements for Social Change, where she notes that she wrote about “militant blacks, angry Indians, radical students, uppity women and a motley assortment of other misfits and troublemakers.”  She had met her people. 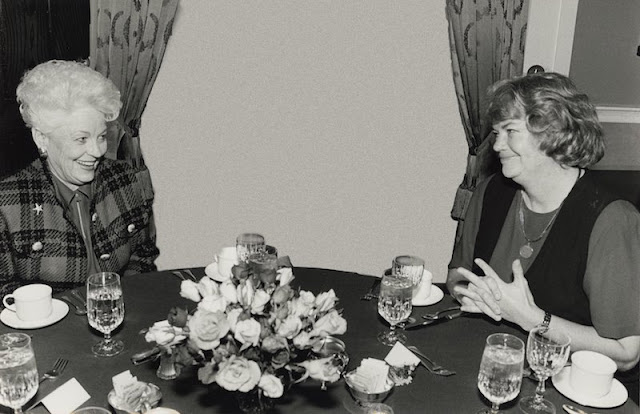 In 1970 she left a perfectly good job to return to Texas to write for The Texas Observer, a progressive bi-weekly and burr under the saddle to the Austin establishment.  She became co-editor of the paper and the chief political writer, specializing in the doings of the legislature.  Before long her pithy accounts of that colorful body were being re-printed nationally and Ivins was soon contributing op-ed pieces to the New York Times and Washington Post and becoming a popular speaker on college campuses.

In 1976 the Times hired her, supposedly to loosen up their staid writing style.  She certainly did that, often clashing with editors over her colorful, salty language.  She was made Rocky Mountain Bureau Chief, which would have been quite an honor if she was not also the entire bureau covering 9 states—states that the editors hardly seemed to know existed or cared to know much about.  Her clashes with editor Abe Rosenthal were legendary. 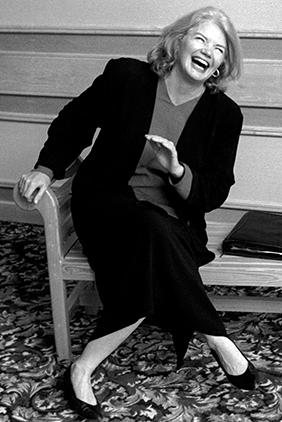 Ivan was no dour, solemn, commentator, which made her a tough fit at the staid New York Times.

She was delighted when the Dallas Times Herald offered her a position as a columnist.  She became such an irritation to Dallas city authorities and others with lots of wealth and influence that the paper sent her to Austin.  After the Herald folded, Ivins moved to the Fort Worth Star-Telegram where she continued her Austin-based column and her relentless attacks on cupidity.  From her seat in Austin, she chronicled the rise of George W. Bush, who she referred to as the Shrub.  When he was elected President, Ivins ended her 19 year run at the Star-Telegram and wrote a nationally syndicated column carried in more the 400 papers. 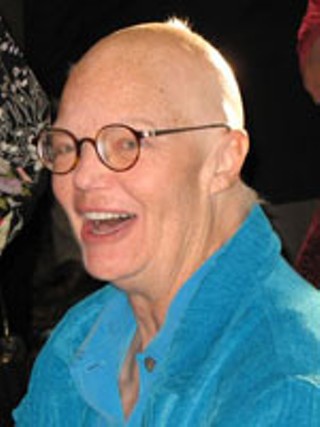 Ivans soldiered on with cheerful gusto to the end.

In 1999 she was diagnosed with stage 3 breast cancer.  She battled the disease with typical ferocity and good humor, twice being declared cancer free only to have the tumors return.  In December 2006 she took leave from her column to again undergo treatment. She wrote two columns in January 2007, but returned to the hospital for further treatment then died at her Austin home on January 31, 2007, at age 62. 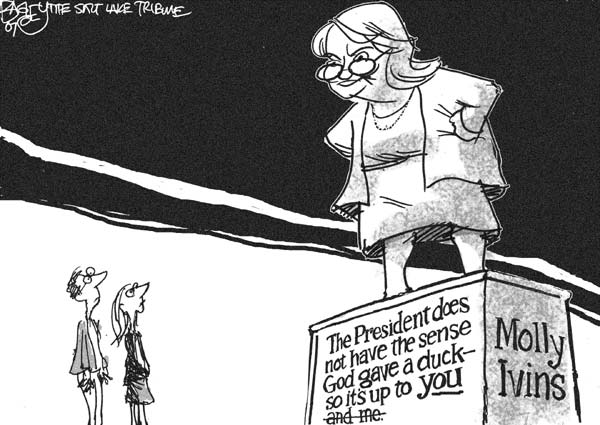 Here is what I wrote in a blog entry the next day:

Flags at half mast, folks. Molly Ivins, a true American hero has died.  When we can least afford to lose her.  She was just about the only major liberal voice in the press who did not sound like, at least occasionally, a prig, twit, or snob.  She never forgot ordinary working people and their lives and they knew it

With keen insight, shrewd wit, and unparalleled Texas charm she belled the fat cats of politics.  From ordinary petty grafters in the state legislature all the way up to George W. “Shrub” Bush himself, no miscreant escaped her attention.

She fought up to the end.  Knowing she was dying she filed her last column in mid-January.  It ended:

We are the people who run this country. We are the deciders. And every single day, every single one of us needs to step outside and take some action to stop this war. Raise hell! Think of something to make the ridiculous look ridiculous. Make our troops know we’re for them and trying to get them out of there. Hit the streets to protest Bush’s proposed surge [to the Iraq War]...We need people in the streets, banging pots and pans and demanding, ‘STOP IT NOW!’