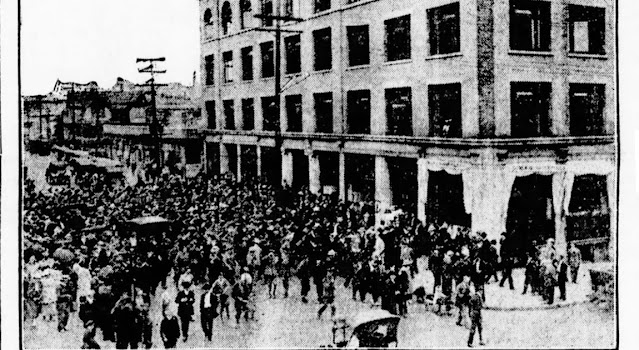 A mob of recently discharged soldiers armed and organized by local employers and authorities raid the Vancouver Labour Temple injuring the Labour Council Secretary, a female employee, and a longshoreman.  Other labor leaders were hunted down and arrested and/or simply kidnapped.  The rank and file of the striking unions, however, continued to conduct the one day General Strike as planned.
Note—We saw yesterday how labor opposition to World War I and the draft was used in the suppression of militant labor leading to the murder of an important radical unionist, Frank Little.  The same forces played out north of the Border with equally deadly results.

On August 2, 1918 Canada saw its first general strike, a well-planned and highly effective one day protest in Vancouver, British Columbia over the suspected murder of labor activist and draft opponent Albert “Ginger” Goodwin.  It came during a war year punctuated by several strikes and labor unrest in the key industries in western Canada including lumbering and milling, coal mining, and on the docks.  Instead of letting the one day action come and go authorities and industrial barons colluded to violently suppress it using hundreds of recently de-mobilized soldiers.

Patriotic fervor was running high in Canada, particularly in British Columbia, considered the stronghold of the Dominion’s English speaking Empire Loyalists.  Canadian troops had been fighting in France for three years and had taken heavy casualties in some of the worst of the trench warfare carnage of the Western Front.

On the other hand, decades of pent up labor frustration were coming to a head.  Many workers bitterly opposed the draft which they saw as “sending poor men’s sons to fight a rich man’s war.”  Socialism had taken deeper hold on Canadian workers than their American counter parts south of the border.  Many still took to heart the socialist international idealism of the pre-war period which had laid hopes on preventing war by refusing to allow workers of one country to be used to kill workers of another.  Unfortunately, despite that high minded rhetoric, one by one the western Social Democratic Parties had fallen in line behind their national governments.  Many western workers bitterly objected to that and remained opposed to the Great War.  Workers also recognize a strategic opportunity to use a pressing need to ramp up war production coupled by a labor shortage created by the draft and general mobilization, to press for significant gains in wages and working conditions.  The wave of strikes, large and small was a natural outgrowth of these circumstances.

The immediate precipitating cause of the General Strike was the death under highly suspicious circumstances of Goodwin, a popular union leader and militant. 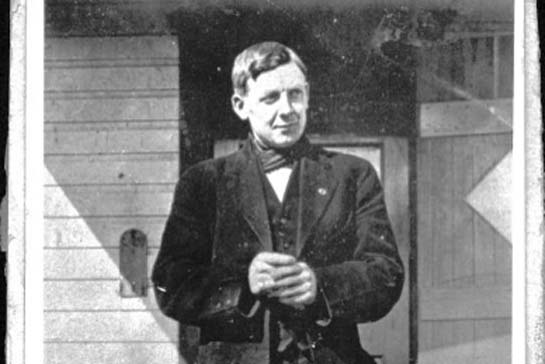 
Goodwin was born in Treeton, England on May 10, 1887.  He immigrated to Canada in the early 20th Century and was working as a coal miner at Cumberland on Vancouver Island by late 1910.  In 1912 he joined the epic strike of the Cumberland mines that dragged on through the beginning of World War I.  The long, bitter strikes confirmed his working class militancy and lead him to taking a greater leading role as a radical and socialist in the trade union movement.  He also entered electoral politics running as an anti-war Socialist Party of Canada candidate in the 1916 provincial elections.

Goodwin’s rise to union leadership was even more impressive.  In December 1916 he was elected secretary of the Trailmen and Smelters Union local on Vancouver Island, a part of the historically radical Western Federation of Miners and the next year he was elected Vice President British Columbia Federation of Labour.  After the WFM changed its name to the International Union of Mine, Mill, and Smelt Workers (MMSW) he became President of District 6 and also of the Trail Trades and Labor Council which united the industrial union MMSW with craft unions in the mines and mills.

He achieved all of this despite his well-known anti-war views and encouragement of draft resistance.  At first he did not, however, personally resist the draft in order to continue his labor work.  He duly registered and was granted a medical deferment on the basis of black lung disease from years in the coal mines and rotting teeth.  After he led a major strike of Trail Smeltermen in 1917 Goodwin found his deferment suddenly canceled and he was called up for active duty.  True to his principles, he fled, living for months in the bush supported by his fellow workers.

On July 27 while camping in the hills above Cumberland, Goodwin was discovered by Dominion Police Special Constable Dan Campbell who shot him dead.  Campbell claimed self-defense although Goodwin’s gun was not fired or found near his body.

When word reached Vancouver the labor movement there was outraged and assumed that Goodwin had been systematically hunted down and murdered.  That was probably a good assumption given that no investigation of the circumstances of the death was undertaken.  The Vancouver Trades and Labour Council (VTLC), not a notoriously radical body which included several relatively conservative craft unions, voted 171-1 in favor of calling a one day General Strike in protest.  There was also a feeling that an effective General Strike would demonstrate the power and solidarity of Vancouver labor, strengthening the hands of member unions in their upcoming confrontations with employers over wage and hour issues.

The strike call included the whole of British Columbia but with just a few days to organize, participation outside of Vancouver was spotty. But in the city with the full support of virtually all of the city’s unions, the strike was paralyzing, but peaceful.

Employers and local authorities—and perhaps the provincial and national governments had enough advance notice of the strike based on the widely publicized call to do some organizing of their own.  Someone with excellent connections arranged to rally by large numbers of recently discharged soldiers to protest disruptive strikes in key industries during a period of national emergency.  Labor was portrayed as “stabbing the troops in the back” and as German agents and/or Bolsheviks.  Not only were the men worked up into a frenzy, but they were also provided with automobiles and armed with clubs and pistols.  A detailed plan for a surprise attack on strike headquarters at the Labour Temple at 411 Dunsmuire Street was drawn up and key mob leaders were provided with detailed layouts of the building. 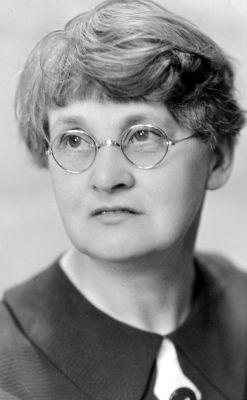 
The supposedly spontaneous mob attacked the building on the day of the strike.  At least 300 men ransacked the offices of the VTLC.  Twice attempts were made to throw VTLC Secretary Victor Midgely from the office window.  A female employee was badly roughed up and injured when she intervened to prevent it.  Midgely and a Longshoreman found in the office—probably acting as an unofficial security guard—were beaten and forced to kiss the Union Jack.  Prominent labor activist and suffragette Helena Gutteridge was also at the scene but was unharmed.  Her account of the attack was widely circulated afterwards.

The ex-soldiers searched the city for union leaders, arresting or kidnapping several.  But the strike was well enough organized that rank and file members kept it in force in good order with a minimum of violence, though there were several street scuffles between strike flying squads and the soldiers and local police.

The strike ended as scheduled and most workers returned to work the next day.  Union officers, and strike leaders, however, were sacked and blackballed. 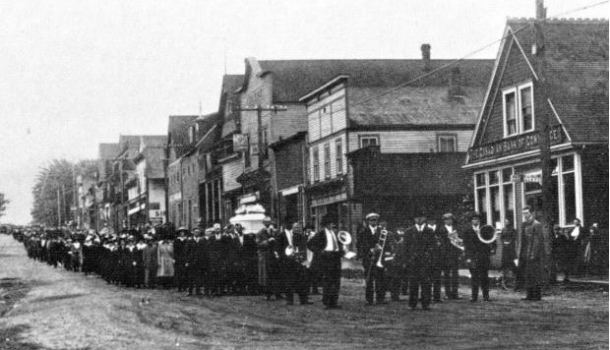 Ginger Goodwin's funeral procession in Cumberland, British Columbia, the mining town where he rose to prominence in the labor movement.


To show the public that the strike had deep support of membership of the participating unions and was not foisted on them by a cabal of devious Bolsheviks, the officers of the VTLC and many member unions resigned en masse then stood for re-election.  The vast majority overwhelmingly re-elected.

The Vancouver General Strike helped set the table for the much larger and open-ended Winnipeg General Strike in June of 1919.  Vancouver would launch to most substantial sympathy strikes in support of Winnipeg that year.

In September of 1919 many leading members and unions of the VTLC bolted the Canadian Trades Council to help form the new One Big Union of Canada, an avowedly revolutionary union inspired by the Industrial Workers of the World in the States.  Like the IWW it adopted industrial unionism rather than craft divisions, although in practice many old craft locals that joined the OBU continued to function without much change except for better co-ordination with other crafts in their industries. 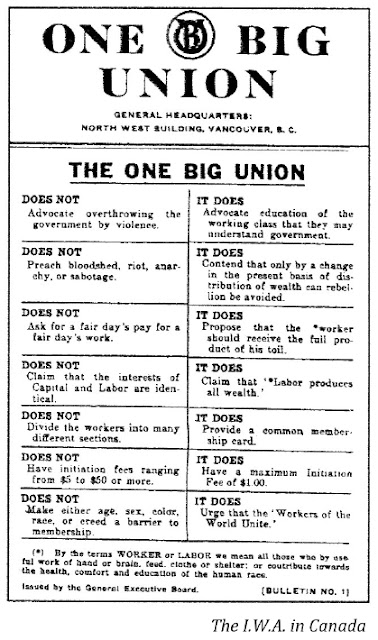 A One Big Union of Canada flyer from 1919 refuting a well orchestrated red baiting campaign.


The OBU was supported by the Socialist Party of Canada and by revolutionary syndicalists.  It flourished in western Canada well into the 1920’s but was beset by red busting harassment from authorities and employers and sapped by poor internal organization.  Member unions began drifting back to the established unions.  Eventually it shrank to a few thousand members, most in the Winnipeg Transit Workers and merged with the Canadian Labor Congress in 1956.

Posted by Patrick Murfin at 5:32 AM