That Little Book by the Slacker in the Woods 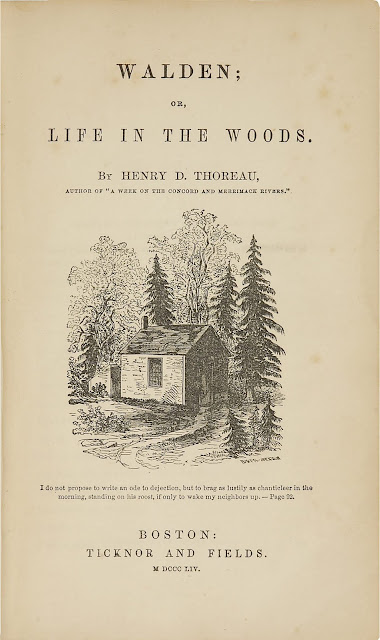 On August 9, 1854 one of the most influential books in American history was published in Boston by Ticknor and Fields, the publisher of the Uncle Tom’s Cabin. The slender book, Walden; or, Life in the Woods, by 37 year old Henry David Thoreau, was eagerly awaited by the Transcendentalists, his intellectual community and close circle of friends who were busy trying to re-imagine everything from God to the politics of human relations.  Few of them, however, suspected that it would outlast most of their own high flown essays, sermons, and poems.

Thoreau spent two years in a small, shingled cabin on a woodlot owned by his friend Ralph Waldo Emerson near a small lake not far from his hometown of Concord, Massachusetts.  People who have not read the book imagine that he lived the life of a hermit in a near wilderness.  Nothing could be further from the truth.

The woodlot and cabin were a pleasant stroll from the very center of the town, perhaps the most intellectual village in American History where Emerson encouraged his coterie of friends and intellectual collaborators to settle in his orbit.  Throughout his stay Thoreau accepted visitors and regularly visited in return.  He typically spent Sunday afternoons dining and visiting with Emerson and other friends.  He also regularly saw his supportive, if perplexed, mother.

It was Thoreau’s intention to experiment with living simply and frugally to avoid the distractions and temptation of society, commune with nature, and dedicate himself to a writing project, the book that would become, A Week on the Concord and Merrimack Rivers.

Thoreau was an intellectually curious, somewhat socially inept, son of a local pencil maker of French descent and a mother of established New England stock.  He was born in Concord on July 12, 1817.  He was reared in the historic Concord Unitarian church served by Rev. Ezra Ripley until 1841.  When the beloved and liberal Ripley died that year and the pulpit was assumed by a new minister who he considered insufficiently in touch with the divine and over concerned with doctrine, Thoreau resigned his membership and never returned, except for funerals and rites of family and friends.  He remained, however within the broader intellectual life that encompassed many Unitarian ministers and lay people, and which was the hatching ground for the Transcendentalist movement.

He was educated at Harvard but did not settle into one of the expected respectable careers of law, medicine, ministry or business.  Instead, he became a schoolteacher and tutor—the occupation of a gentleman without other prospects.  After a brief stint as a public school teacher in Concord, which he resigned because he would not administer required corporal punishment, he and his beloved older brother John began their own Concord Academy in 1838.  The school shocked folks by taking students out of the classroom for frequent walks through the meadows and woods to explore nature and visits to local shops and businesses like the blacksmith where middle class students were shown how things were actually made.  The school ended when John died in his brother’s arms of tetanus in 1842. 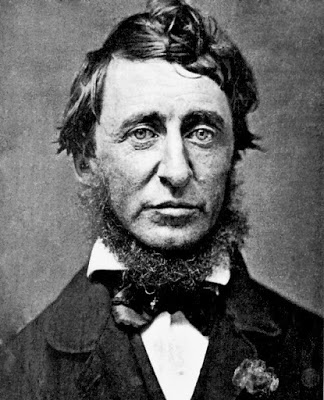 Henry David Thoreau about the time he wrote Walden.

During these years Thoreau fell in with Emerson’s circle when the Sage of Concord returned to his ancestral home after his unsuccessful turn at a Boston pulpit.  He became one of the first members of the group that regularly congregated at the philosopher’s home.  Emerson enticed his friends to join him in Concord, and many did.  Others frequently made the short trip from Boston and Cambridge.  Among those regularly in this circle were Bronson Alcott (father of Louisa May), the poet Ellery Channing, Margaret Fuller (editor of The Dial), Nathaniel Hawthorne and his wife Sophia and Sophia’s accomplished sisters Elizabeth and Mary Peabody.

Although only a few years older than Thoreau, Emerson became a friend and surrogate father.  He encouraged Thoreau to publish his first work in The Dial and instructed him to start a personal journal.  From 1841-44 he actually lived most of the time in Emerson’s home functioning as a tutor to his children, an editorial assistant for the busy writer, and a handyman.

Later, he would enter the family pencil business, working side by side with his employees.  He continued this, with the notable exception of his two years at Walden, for most of the rest of his life.  He was on one hand alienated by the distractions of day to day business, and on the other quite diligent.  He adapted new methods of pencil manufacture which mixed clay as a binder with graphite for improved stability and longer life, and in his last years pioneered the use of graphite to ink typesetting machines.

He often spoke of establishing a small subsistence farm to get away from business and concentrate on his writing.  His move to Emerson’s woodlot in April of 1845 was sort of an experimental half-step to that dream.  Emerson agreed to allow Thoreau to build his cabin and cultivate a small garden in exchange for clearing part of the woodlot and continuing to do other chores for the Emerson family.

His plan was to live as simply as possible while supplying his basic needs for food, shelter, clothing and fuel.  The woodlot provided ample fuel, and the garden was productive. He also fished Walden Pond for food.  He did buy staples—flour, sugar, coffee, lard, etc.  His mother frequently brought gifts of food, and of course he dined regularly with Emerson.

He built the simple one room 10 foot x 15 foot cottage, which he described as being in the English style, with shingled siding and a hard packed dirt floor.  In his meticulously kept records where he wrote that he spent only $28.12½ in his first year.  All of this he accounts in the first chapter of the book.  He actually cultivated an acre and a half in beans for a cash crop, earning more than $8.00 from the sale of the harvest.

N.C. Wyeth's 1933 Walden Pond Revisited depicts Thoreau, Walden Pond, the cabin and Concord in the distance.  It hangs in the Concord Museum and is the featured illustration of the Thoreau Society's web page.

The book is a somewhat rambling account of his time there and includes musings on his reading habits, solitude, the spirituals inspiration of nature; accounts for his daily activities including his housekeeping and chores, almost daily visits to Concord, and his rambles.  He kept track of visitors—more than 30 in all—including a runaway slave who he hid and helped to escape.  He complained of the sound of a train whistle, which reminded him of the corruption of nature by commerce and extolled a basically vegetarian diet which he admittedly did not always keep himself.  He postulated a number of Higher Laws.

On one trip into the village in July of 1846, Thoreau had a chance encounter with the local tax collector, who demanded payments for six years in arrears Poll Taxes.  He refused to pay in protest to the Mexican War and the Fugitive Slave Law and was arrested.  He was released the next day when, against his will, his mother paid his arrearage.  He later used this experience as the basis for lectures at the Concord Lyceum in 1848, The Rights and Duties of the Individual in relation to Government, which he amended into an essay now known as Civil Disobedience published by Elizabeth Peabody in the Aesthetic Papers.  This is the work that informed the philosophies of Leo Tolstoy, Mahatma Gandhi, and the Rev. Martin Luther King, Jr.

In August Thoreau briefly left Walden for to a trip to Maine, of which he would write much later in his book The Maine Woods.  Thoreau finished the manuscript account of his 1839 trip with his brother John and left the cabin in September 1847 after two years and two months.

He unsuccessfully sought a publisher for his manuscript and finally took Emerson’s advice to print it at his own expense.  He commissioned 1000 copies of A Week on the Concord and Merrimack Rivers from Emerson’s publisher but was only ever able to sell 300.  He had to work for years at the pencil factory to pay off this debt, which cooled his relationship with Emerson.

While working at the factory, Thoreau polished his journal notes into a manuscript compressing his two year experience into a single year for the book, divided in symbolic seasonal quarters.  It was finally published in 1854.

Thoreau became a prolific writer and essayist.  He produced books on local history and became an increasingly skilled naturalist.  His later books on nature helped inspire the ecology movement more than a century later.  He also remained a defiant abolitionist and became one of the few writers who publicly came to the defense of John Brown after the failed raid at Harper’s Ferry. 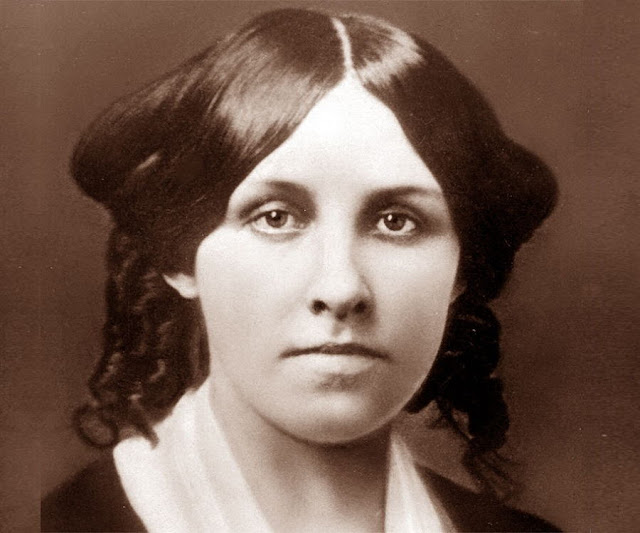 Louisa May Alcott lived next door to Emerson as a young girl and knew Thoreau well.  She thought his neck whiskers repelled women.

He never married, although he claimed to be an admirer of women.  Louisa May Alcott believed his lopsided features and the scraggly neck beard he wore in his Walden period repelled women who might otherwise have been interested.  Modern biographers refer to him as largely asexual.

He suffered from Consumption—Tuberculosis—from at least 1836, which left him in fragile health despite his frequent extended tramps in the woods and fields.  He contracted bronchitis while trying to count tree rings of recently felled old growth trees in a cold rainstorm in 1859 and never recovered his strength.  He spent his last years bed ridden and editing his final manuscripts.

He died at peace with himself on May 6, 1862 at the age of 44.  Bronson Alcott arranged the funeral service where Ellery Channing read an original elegy and Emerson, almost beside himself with grief, delivered the eulogy.  He was buried in a family plot which was later moved to Concord’s Sleepy Hollow Cemetery. 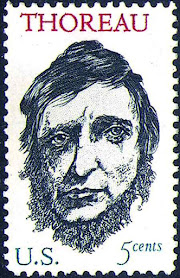 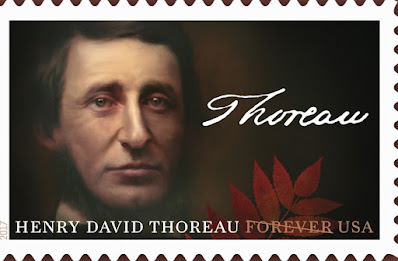 Critics were outraged by the 1967 U.S, postage stamp with they thought depicted Thoreau as a filthy hippy.  The 2017 Forever stamp issued on the bicentennial of his birth made him look more distinguished.

Thoreau’s reputation grew posthumously, especially after his journals and other private writings were published in the late 19th Century.  Walden became required reading in many high school English classes and influenced the emerging counter-culture of the 1960s.

Posted by Patrick Murfin at 6:59 AM