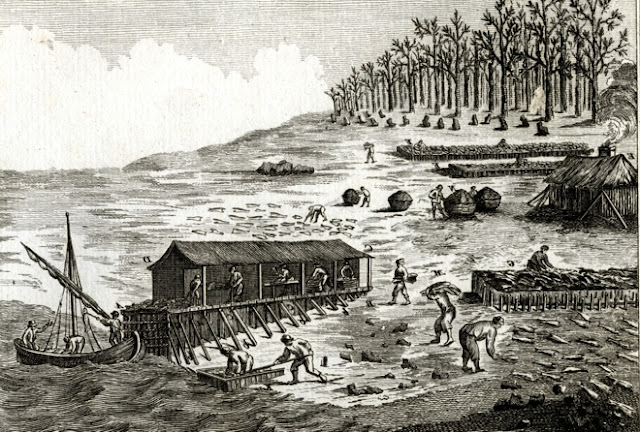 Fishermen from Holland, Portugal, Normandy, and England put ashore at St. Johns in seasonal camps to dry, salt, and store the cod bounty from the Grand Banks for decades before a colony was officially established.

Ok, it’s quiz time, campers!  For 100 points and a gold star on your forehead, what was the first English colony in North America?  Bzzzzz.  If you said, I bet almost all of you did, Virginia (Jamestown) or Plymouth Plantation, you would be dead wrong.  By decades.

On August 5, 1583 Sir Humphrey Gilbert established that first English colony at what is now St. John’s, Newfoundland and Labrador in Canada. 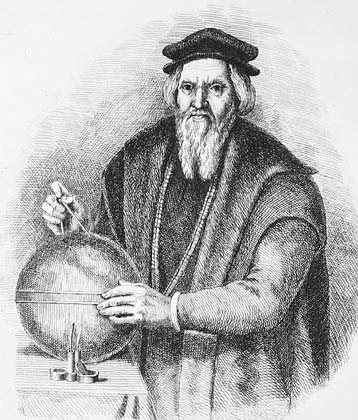 Venetian navigator John Cabot sailing for England's King Henry VII discovered the deep natural harbor in what is now Newfoundland in 1497 and name it for St. John the Baptist.


John Cabot became the first European to sail into the deep a commodious harbor way back on June 24, 1497, the feast day of Saint John the Baptist and bestowed the Saint’s name on the place, although his exact landfall is unknown.  Cabot made his charts and reported back to his English employers including the information that the harbor had easy access to the seemingly endless cod fisheries offshore.

By the early 16th Century Portuguese from the Azores, Basques from Spain, and the French were annually visiting the fisheries and sometimes making temporary camp ashore and trading with the natives.  On August 3 1527 English sailor John Rut on a mission from King Henry VIII to find the Northwest Passage that Cabot had been seeking thirty years earlier sailed into the harbor where he found eleven Norman, one Brittany, and two Portuguese fishing vessels moored.  He described the event in a letter to the King, the first ever written from North America.

By the 1640’s St. Johns, by now a well-established seasonal fishing camp, appeared in various Portuguese and French atlases.  Around that time Water Street running along the harbor shore was in use, making it the oldest street or road in North America.

Reports on the rich fisheries and fine harbor began to attract English fishermen from the west country as well.  Within the next thirty years or so they dominated the annual summer runs.

Sir Humphrey Gilbert, a soldier/explorer/adventurer like his half-brother Sir Walter Raleigh, managed to set sail for the New World under a nearly expired six-year royal patent for exploration in 1683 with a small six or seven ship fleet crewed by the dregs of English ports.  One ship sailed under the command of Raleigh, but he was forced to turn back when his ship was damaged in a storm.

After trials and tribulations Gilbert and his little fleet arrived off St. Johns but found themselves blocked from landing by the united opposition of multinational fishing fleet which was commanded by an Englishman appointed by the seamen as Admiral.  One of Gilbert’s ship masters had committed piracy against the Portuguese some years earlier and was recognized. 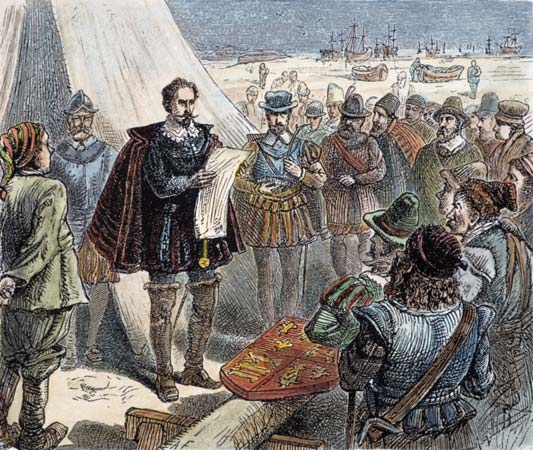 Sir Humphrey Gilbert claimed St. John's as a colony of England and Queen Elizabeth I before astonished fishermen from half a dozen countries.


Eventually Gilbert satisfied the fishermen and was allowed to land on August 5.  They were astonished when Gilbert, waving his patent papers, claimed St. Johns and a vast surrounding area for the English Crown.  The claim was solemnized in a brief ceremony ashore.   After a few days Gilbert and his fleet sailed away, supposedly back to England.

But Gilbert decided to do a little freelance exploring first and managed to ground his largest vessel losing most of his food, water, and supplies.  On board his personal favorite, a leaking tub called the Squirrel instead of the far more seaworthy Golden Hind, the ship that had circumnavigated the globe under Sir Francis Drake a few years earlier, he foundered and was lost on September 9.

But his claim made it safely back into the hands of Queen Elizabeth, officially making it the first colony in North America.  Plans for permanent settlement, however, were put aside for some years.  But the seasonal fishing village flourished, and the Queen and her successors made a pretty penny taxing the fleet.

Sometime before 1620 a permanent settlement was finally established, about the same time as Jamestown in 1619 and Plymouth a year later.  Shortly after it became the first incorporated English city on the continent. 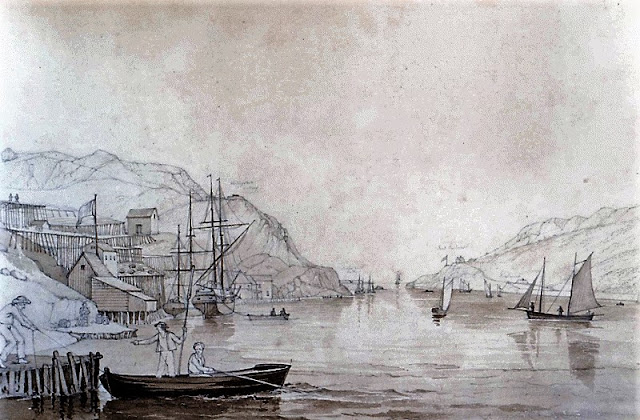 An early view of the St. John's waterfront.


St. John’s because of its magnificent harbor and command of the rich Grand Bank fisheries became a strategic point for the control of the entire continent. The Dutch under Admiral Michiel de Ruyter temporarily seized the port in June 1665.  After that the English began to erect fortifications, which were re-enforced after each new threat.

French Admiral Pierre Le Moyne d’Iberville captured and destroyed the town in 1696 and leveled the original earth work fortification.  The English returned the next year to find the town all but deserted after which stronger stone and masonry fortifications were built. The French attacked St. John’s again in 1705 and captured it in 1708 in the Battle of St. John’s. Both times the civilian town was leveled by fire.

The French attacked St. Johns in 1762 in the Seven Years War.


The French captured the town for the last time in 1762 during the Seven Years War known as the French and Indian War in the lower English colonies.  The English took it back after the Battle of Signal Hill, the final major action of the war.

The port city was a major English naval base and staging area for operations in both the American Revolution and the War of 1812. 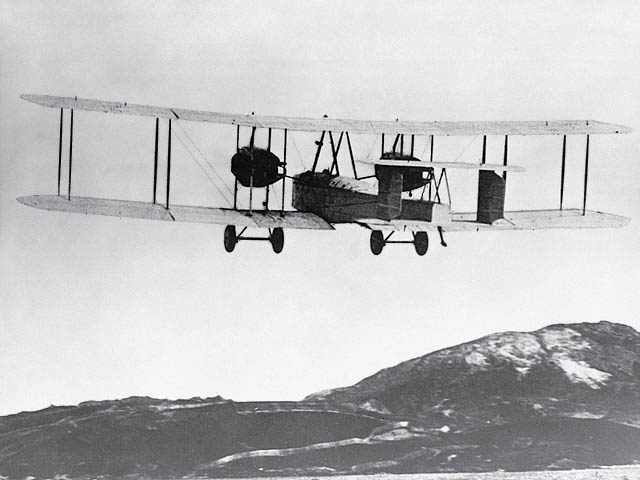 British aviators John Alcock and Arthur Brown  made the first non-stop transatlantic flight in June 1919 taking off in a modified World War I Vickers Vimy bomber from St. John's.


Because it is the eastern most port in North America, St. Johns figured prominently in several communications and transportation firsts.  Guglielmo Marconi received the first transatlantic radio signal there from his wireless station in Poldhu, Cornwall in December 1901.  Alcock and Brown made the first transatlantic flight in a modified Vickers Vimy IV bomber, in June 1919 leaving from Lester’s Field in St. John’s and ending in a bog near Clifden, Connemara, Ireland.

St. John’s is the capital city of Newfoundland and Labrador which after a long history as an independent colony became the 10th Province of Canada in 1949. 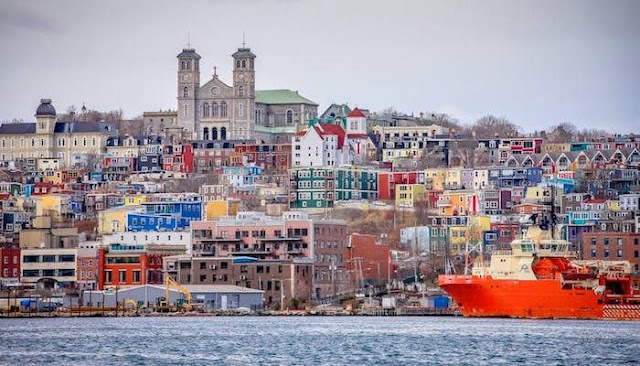 
In the 1990’s the cod fisheries of the Grand Banks, the economic engine of the city for hundreds of years, collapsed plunging the city and province into a depression and causing a hemorrhage of population to the rest of Canada.

In recent years the development of the Hibernia, Terra Nova and White Rose oil fields has spurred population growth and commercial development.