Decades Later Emmett Till is Still a Victim and a Symbol 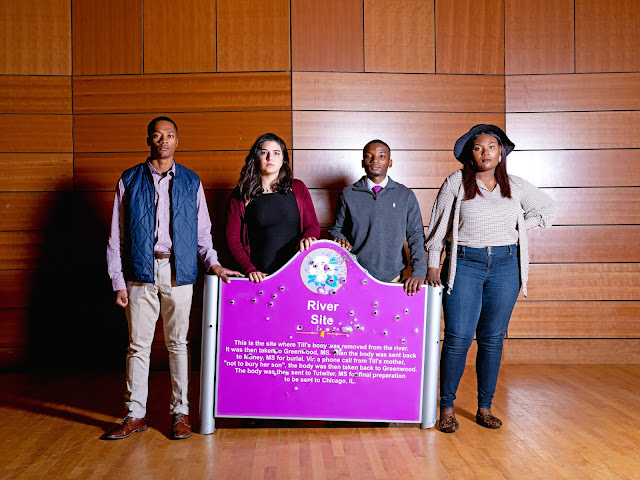 University of Mississippi students hold a bullet ridden Emmett Till historical marker before carrying it to a Confederate monument on campus.

The horrific and unthinkably brutal lynching of Emmett Till, a 14-year old Chicago boy visiting rural Mississippi on August 28, 1955 for allegedly whistling at a White woman still challenges America’s racist character.   This year on the anniversary the Smithsonian National Museum of African American History and Culture announced that it was putting on display a bullet riddled historical marker from the site where Till’s mutilated body was thrown into a river weighted down with a 70 pound cotton gin fan blade.  It was the third of four markers vandalized, shot up by self-proclaimed Ku Klux Klansmen who posed for social media photos with their handiwork.  It was replaced a fourth time by a bullet proof marker which was also vandalized but not destroyed.

Before arriving at the Museum, the marker played a key roll in the bitter and divisive movement to remove Confederate monuments from public places.  In 1919 students at the University of Mississippi carried Till’s marker through campus after a panel discussion hosted by the Emmett Till Memorial Commission to Memorial for the Confederate War Dead which had been the target of on-going protests demanding its removal—part of a wave of such protests sparked by Black Lives Matter Movement.  That movement owed its inspiration in no small part to Emmett’s mother Mamie who insisted that his horribly disfigured body be displayed in an open casket at his funeral to show “what they did to my boy.” 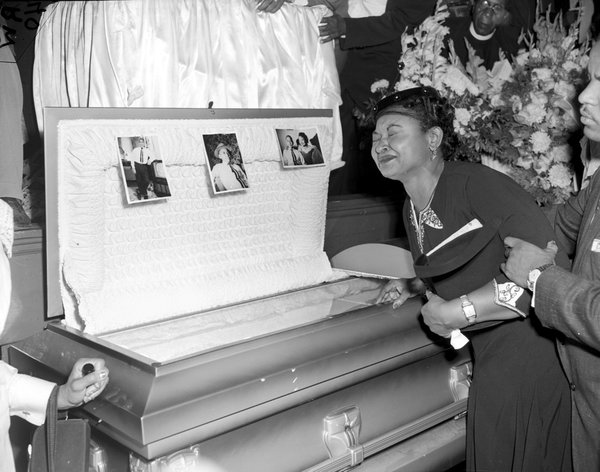 Mamie Till's decision to display her mutilated son's body in an open casket funeral helped rally the Civil Rights Movement in the South.


In 1955 Till’s martyrdom helped galvanize the Civil Rights Movement.  Although I don’t recall his name being mentioned at Dr. Martin Luther King’s milestone March on Washington for Jobs and Justice exactly eight years later in 1963 that event, broadcast live on national television was a testament on how far the movement had come in just a few years.

But it also inspired the Klan, White Citizen’s Councils, and other night-riding terrorists.  The failure of local courts to convict the known perpetrators of the outrage convinced white supremacists that they were untouchable and had the full support of the wider community.  That led to years of lynchings, assassinations, assaults, bombings, and mob intimidation executed with impunity.

Eventually Federal intervention and enforcement, no matter how reluctant, shifting public opinion, and the simple weariness of many white Southerners with the cycle of protests and violent reprisal that was hurting the businesses.  Slowly a much ballyhooed “New South” emerged that grudgingly accepted integration and Black voters with significant political power.  Old Firebrands and Alabama Governor George Wallace changed their tunes.  The Klan went back underground seldom to be mentioned or acknowledged. 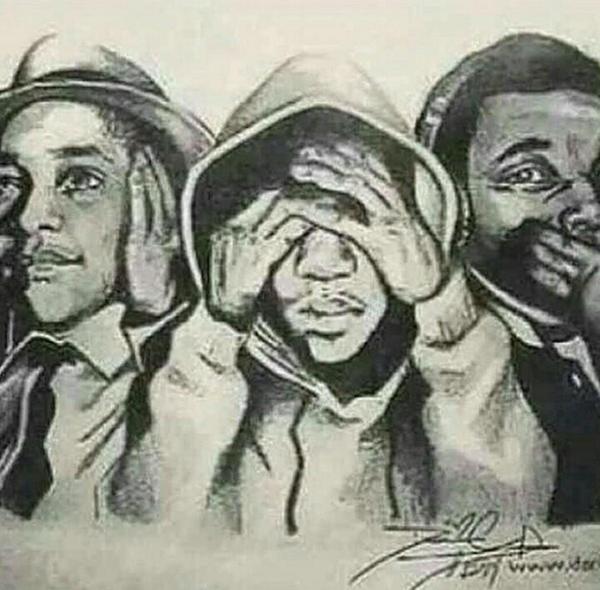 Emmett Till, left, was linked to Trayvon Martin, and Mike Brown whose deaths helped spark the Black Lives Matter Movement.


The overflowing outrage at police executions of Black citizens and the street confrontations of the Black Lives Matter Movement ripped the band-aid off an old scab.  The Klan and other white nationalist who had never really gone away but who operated on the fringes of society were empowered again by the Trump Era and the dog-whistle of “Make America Great Again.”  Attacks on Confederate monuments brought them to center stage as defenders of tradition and heritage.  Since Charlottesville violent confrontations with anti-racists and anti-fascists have become common.  Scores of groups swelled in membership.  Demanding their “First Amendment right to bear arms” often with the support and complicity of right wing state and local governments, has turned them out in great numbers in combat gear and armed with automatic weapons.  They even became emboldened to attempt coup d’état last January at the Capitol.  That comic opera putsch may have been premature, but they are laying the groundwork for a second insurrection.

Emmett Till is once again a convenient symbol and rallying cry for both sides of the great divide.  Not only was the river site marker defaced, but another historical marker at the site of the general store where Till allegedly insulted pure white Southern womanhood.  Has also been shot up on multiple occasions.  One of the markers is now on exhibit at The National Civil Rights Museum in Memphis.

No one is yet raising monuments to Till’s murderers or to the current crop of terrorists, but it may only be a matter of time.

Note—For a full review of Emmett Till’s life and death, his mother’s crusade, and the search for justice visit my 2015 blog post The Legacy of Emmett Till 60 Years Later.

Posted by Patrick Murfin at 8:42 AM