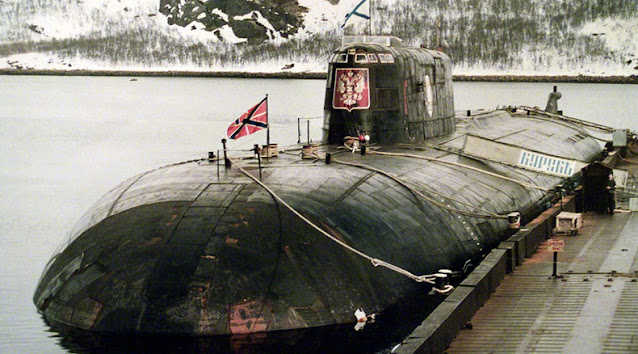 The Russian nuclear powered attack submarine Kurst designed during the last days of the USSR was one of the most modern and prestigious ships in the new Russian Navy.  She was better maintained than most of the fleet but even her was not in top condition as noted by visible rust on her hull and her crew lacked training.

On August 12, 2000 the Russian submarine K-141 Kursk sank in shallow waters in the Barents Sea (north of Russia and northeast of the Scandinavian Peninsula) after being ripped apart by two powerful explosions.  All 118 officers and seamen aboard died, although as many as 23 may have lived for days in an aft compartment fruitlessly awaiting the rescue which at the shallow depth of 354 feet should have been possible.

The Kursk was the largest nuclear powered attack submarine ever built.  It measured over 500 feet long and was four stories high at the conning tower.  Designated by NATO as an Oscar II class sub, it was designed in the waning days of the Soviet Union but was the first ship completed under the Russian Republic in 1994.

The Kursk was assigned to the Russian Northern Fleet and based at Vidyaevo in the Kolsky District of Murmansk Oblast.  In the turmoil following the collapse of the Soviet Union and the resulting economic crisis and hyper-inflation, the condition of the Northern Fleet deteriorated badly.  Much of the fleet was allowed to rust at anchor.  Maintenance of even active ships was neglected, including care for the Russian Navy’s specialized submarine rescue ships.  Sailors went without out pay for as long as two years and were sometimes seen in villages in the area literally begging for food.  Many experienced officers and men left or abandoned the service.  Training was neglected.  The Kursk, considered a show piece and object of national pride, fared better than most of the fleet, but certainly was not up to top operational standards.

When tough guy Vladimir Putin assumed control of Russia in 1999, he made rebuilding the military and Navy a high priority.  The Kusk was one of the ships that benefited from his attention.  Freshly outfitted, Putin dispatched it on a mission in the Mediterranean to monitor the U.S. Navy Sixth Fleet during the Kosovo War.

After that successful flexing of naval power, the Kusk was assigned that August to the Northern Fleet’s largest training exercise in nine years.  The exercise involved four advanced attack submarines, the fleet's flagship Pyotr Velikiy (Peter the Great) and a flotilla of smaller ships.  The Kusk was making attack runs at the Pyotr Velikiy using dummy torpedoes when an explosion wracked the bow of the ship at 11:28 AM local time followed by an even more powerful blast, which was recorded at the equivalent of 3 to 7 tons of TNT, a little more than two minutes later.

The second explosion sent debris through most of the length of the submarine.  The ship sank quickly with the immediate loss of most hands.  However, Captain Lieutenant Dmitriy Kolesnikov and twenty-two others made it to a sealed compartment in the aft where they survived for some time. 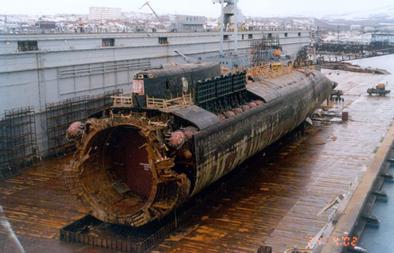 Kursk was salvaged by Dutch companies which cut away the bow where possible nuclear-tipped cruise missiles may have been located.


Russian authorities have always maintained that they must have died quickly, but evidence from salvage operations conducted in 2001by the Dutch companies Mammoet and Smit International indicated that they may have awaited rescue for days before being killed in a flash fire in the half-submerged compartment.

Soon after the accident British and Norwegian ships monitoring the exercise offered to come to the rescue of possible survivors.  But Putin, who was on vacation on the Black Sea, and Navy brass turned down the offer out of a combination of national pride and to protect secrets about the ship’s capacity and armaments.  Russian attempts at rescue and recovery were unsuccessful.  Putin did not return to Moscow or issue a public statement on the disaster for a week.

The best reconstruction of the accident indicated that a hydrogen peroxide fueled supercavitating torpedo exploded when the highly concentrated propellant seeped through rust in the torpedo casing and exploded.  Heat from the first blast set off six or seven torpedo war heads and the secondary explosions were probably fatal to the ship. 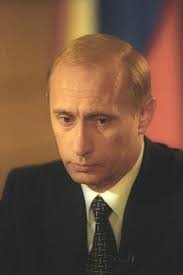 Vladimir Putin was interviewed in 2000 about the Kursk catastrophe on RTR, the international service of VGTRK, a state-owned Russian broadcaster.  He denied there were nuclear weapons aboard and tried to deflect blame.

These kind of hot torpedo accidents were a known hazard to submarines.  A similar accident sank the British sub HMS Sidon in 1956 and is the principle suspected cause in the loss of the U.S. Navy’s USS Scorpion in 1968.

Russia always denied that the ship’s missiles were armed with nuclear weapons, but it was a concern for the salvage companies, who cut the ship’s bow away from the rest of the boat before raising her.  The bow, including much of her armament, was destroyed by explosive charges in 2002.  The reactor was defueled and taken to Sayda Bay on the northern Kola Peninsula where reactor compartments were floated on piers.  The rest of the hulk was cut up for scrap. 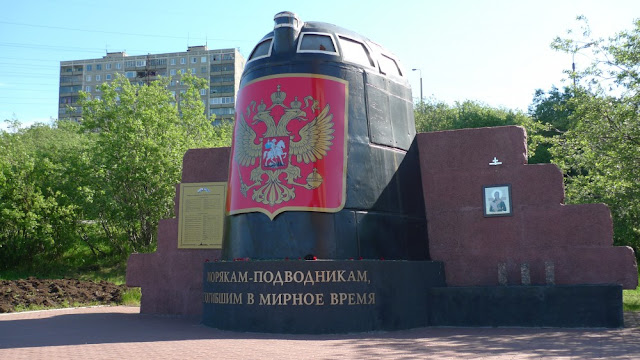 The conning tower of Kursk today serves as a memorial in Murmansk.

The loss of the pride of the Northern Fleet, the botched attempts at rescue, and the fact that salvage had to be performed by Western companies despite a shallow depth close to Russian shores remains an embarrassment for Russia and for Vladimir Putin.

Posted by Patrick Murfin at 4:54 AM