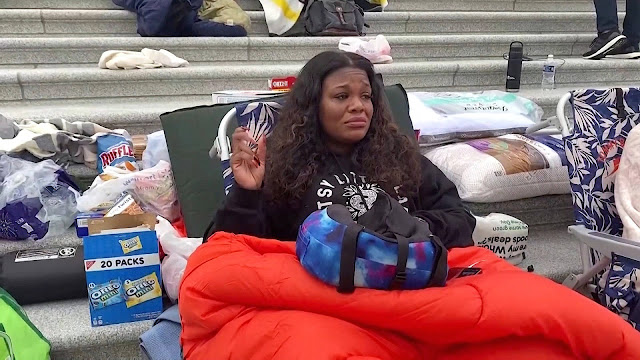 Missouri Democratic Representative Cori Bush camped out with other activists on the Capitol steps to get Congress to extend a moratorium on evictions and foreclosures.

A new wave of homelessness is about to swamp the U.S.  No one is prepared.  Most don’t even know it’s coming.  The few who have answers are ignored.  The Federal ban on rental evictions and home foreclosures during the Coronavirus pandemic emergency was allowed to expire on August 1 and attempts to get an extension in Congress have run up against veracious Republican opposition—they are all suddenly budget hawks again and Democratic timidity despite the valiant efforts of formerly homeless Missouri Representative Cori Bush and progressive star Senator Elizabeth Warren of Missouri.

Hundreds of millions of emergency assistance to tenants, mortgagees, landlords, and lenders which could save man remains unspent by the states.  Many Red states do not want to use or release the money at all and most erect every barrier to making it practically available.  Blue states like Illinois have our own problems—overwhelmed bureaucracy and application processes so complex that they leave applicants frustrated.  And now there is pressure in Congress by some including allegedly moderate Democrats to claw back unspent assistance to fund the supposedly bi-partisan compromise infrastructure bill.

While House Speaker Nancy Pelosi tries to resurrect relief in the House, the Center for Disease Control ordered moratoriums to continue in counties with high rates of infections and hospitalization due to surging Delta variant infections.  But that is only temporary and still excludes much of the nation.  Lawyers are already lining up to challenge the ruling in Federal courts now packed with right wing judges. 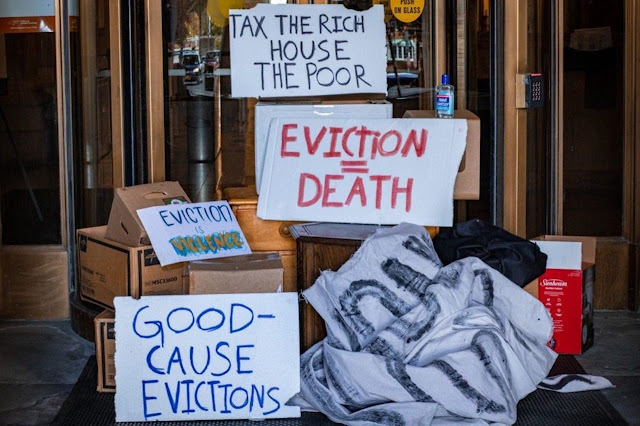 Protests like this one in New York state are popping up around the country as the threat of evictions loom.


What does it mean? Evictions and foreclosures can now proceed in most places.  How long renters and homeowners have before being put out on the street will vary widely by state and jurisdiction.  Some can be put out by the end of the month.  Many others will be homeless this fall and winter.

Here in Illinois, the state moratorium also expired on Sunday.  Cases can be filed in court immediately, but no judgements can be handed down until September 1.  Governor J.B. Pritzker promises to double-down efforts to distribute long delayed assistance and has pled for forbearance from landlords and lenders.  How many will heed that plea is in question.  My guess is not many.

For their part folks whose income was stopped or disrupted by the pandemic cannot suddenly come up with months of back rent or mortgage payments even if they have been able to return to work.  Savings have been exhausted, other creditors are demanding payment.  Many are low wage workers who housing security was already shaky due to soaring rents, home prices, and taxes.

In Chicago CBS Channel 2 News reported that 45 eviction notices were filed on Sunday, and eight in suburban Cook County.  No figures are yet available for the collar counties including McHenry, but everyone expects the courts to be swamped.

The upshot is that thousands will be unhoused in coming weeks and months including many families, the aged, and the disabled.  Most will have never experienced homelessness and will be unprepared for its brutal realities. 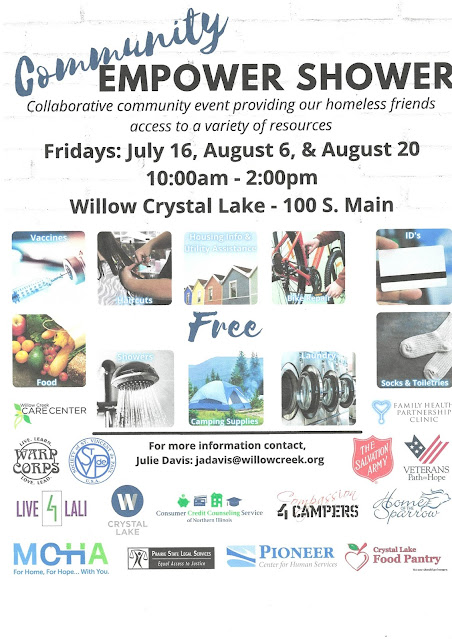 In McHenry County social service and government agencies, charities, and religious organizations have been working since July to offer comprehensive services to the unhoused and those in jeopardy at Community Empower Shower Events hosted by Willow Crystal Lake, 100 South Main Street on the first and third Fridays of every month from 10 am to 2 pm including this Friday, August 6 and Friday, August 20.

Among the many services that will be offered at no cost are:

Shelter and Housing Referrals and Linkages

This month information on obtaining bicycles and bike repair will be added to the mix.

All these services could be—and probably will—be swamped with the new dispossessed in the near future.  All understand that the only true solution for homelessness is permeant housing.  But there is no real effort to find, provide, or build that necessary housing locally and a good deal of fearmongering by opponents of affordable housing and victim blaming/shaming by ideologically ruthless so-called libertarians and the MAGA enthralled.

Meanwhile all service providers will need assistance to continue the palliative efforts. 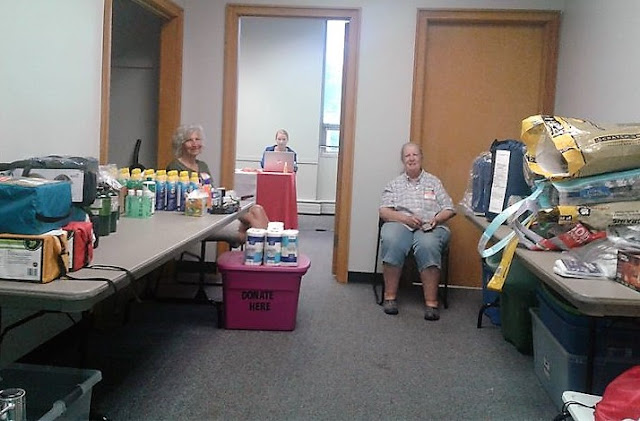 Compassion for Campers volunteers And Myer and Sue Rekenthaler ready for clients the the July 16 Community Empower Shower event at Willow Crystal Lake.  Much more gear will be required over the next months.


Compassion for Campers, the program that provides camping gear and equipment to the McHenry County unhoused is one of those.  Contributions to support Compassion for Campers including building reserves for emergency hotel rooms during cold and snow emergencies this winter can be made by sending a check made out to Tree of Life UU Congregation, 5603 Bull Valley Road, McHenry, IL 60050 with Compassion for Campers on the memo line. The donations are placed in a dedicated fund and not used for any other purpose.  Tree of Life also donates all the administrative expenses of the program so 100% of all donations go directly to client assistance.

Posted by Patrick Murfin at 8:12 AM