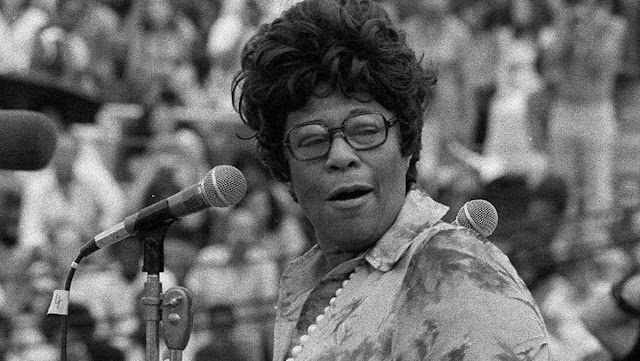 In 1972 Ella Fitzgerald sang Mac the Knife with trumpeter Al Hirt at Super Bowl VI in New Orleans as part of a tribute to Louis Armstrong.  Broadway star Carol Channing also performed.  They became the first celebrity artists to perform at the Super Bowl and Ella was the first Black woman.

Ella Fitzgerald is regarded by many as the greatest female singer of the 20th Century and there is plenty of competition.  Her career spanned decades from a novelty song specialist as a teenager to the undisputed First Lady of Song.  She sang with big bands, invented scat singing, moved seamlessly to jazz improvisation in the bebop era, and reinterpreted the canon of the Great American Songbook introducing generations to popular music as an art form and preserving classics that otherwise might have faded from memory.

Fitzgerald was born on April 25, 1917, in Newport News, Virginia, but moved to Yonkers, New York with her mother and Portuguese-born step father in the early 20’s.  After her mother was killed in an auto accident when she was 15 she left her step fathers home quickly and moved to live with an aunt in Harlem.  Most biographers believe she had been physically or sexually abused.

Despite being an excellent student in Yonkers, Fitzgerald began skipping school and hanging with a rough street crowd.  She was soon acting as a lookout for a bordello and ran numbers for a Mafia run game, a common job in Harlem.  Arrested, she was placed in the Colored Orphan Asylum in the Bronx and then at the New York Training School for Girls in upstate Hudson.  She may have again been abused there and escaped four times and was sometimes homeless back in Harlem.

A virtual street urchin with all of the predatory dangers that involves, Fitzgerald began busking on the streets dancing and imitating the jazz records she heard of Louis Armstrong, Bing Crosby, and The Boswell Sisters.  Her first break came on November 4, 1934 when she unexpectedly won one of the earliest of the Apollo Theater Amateur Nights.  She got the $25 prize—which must have seemed like a fortune—but not the promised week-long booking at the theater because of her threadbare appearance. 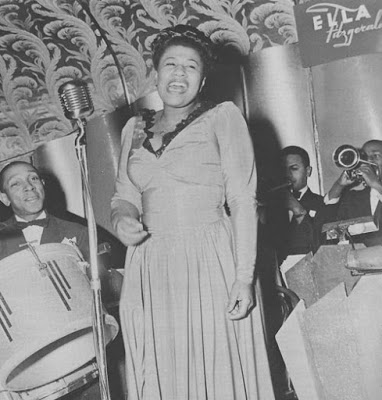 Young Ella with the diminutive Chick Webb at the drums in one of their famous Savoy Ballroom sets.

But the following January she did sing for a week with the Tiny Bradshaw band at the Harlem Opera House.  Then she was picked up by drummer Chick Webb’s big band despite his reservations about her “scarecrow appearance.”  She became a favorite with the band in its famous appearances at the Savoy Ballroom which were broadcast on radio.  She recorded several sides with the band and was highly regarded by her fellow musicians.

Fitzgerald already had a mid-level hit with (If You Can’t Sing It) You’ll Have to Swing It (Mr. Paganini) when a ditty she co-wrote, A-Tisket, A-Tasket became a smash and introduced her for the first time to wide White audiences. That was something of a mixed blessing—all they wanted to hear from the “little girl” were novelty songs.  Eventually it got her in movies with cameo appearances like in Abbot and Costello’s Ride ‘em Cowboy in 1942. 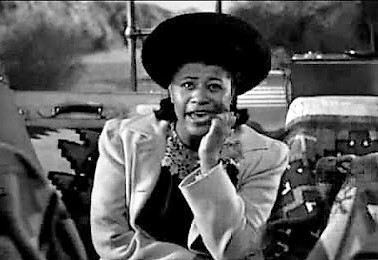 lla singing A-Tisket, A-Tasket from the back of the bus in the Abbot and Costello flick Ride 'em Cowboy.

But Ella was working, touring, recording, and most importantly no longer hungry or tattered.  When Webb died in 1938 Fitzgerald took over the band, which was re-named Ella’s Famous Orchestra—almost unheard of for a girl singer and recognition of her serious musical chops.  With and without Webb Ella and that band laid down almost 150 sides before the band dissolved in 1942 when many members went into the service.  Ella easily established a solo career recording at Decca and gaining critical attention with her regular appearances with the prestigious Jazz at the Philharmonic concerts.

With the demise of big band swing after World War II Fitzgerald adapted seamlessly to the new bebop sound.  Working frequently with Dizzy Gillespie she was credited with inventing scat singing—nonsense syllables improvised around the melody.  It was her way of doing as a vocalist the riffs the other musicians were inventing on the spot.  “I just wanted to do what I heard the horns playing,” she said. 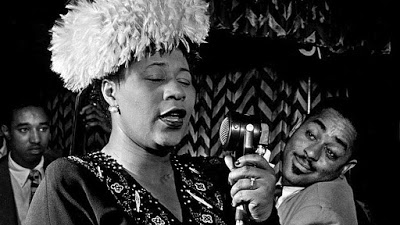 Ella in  1947 with then husband Ray Brown, left, and Dizzie Gillespie, right--the Queen of Scat and Bebop.

In 1955 with Bop fading in popularity, Fitzgerald shifted gears again when she signed with Verve Records produced by Jazz at the Philharmonic impresario Norman Ganz.  Beginning with Ella Fitzgerald Sings the Cole Porter Song Book together they produced a string of landmark albums featuring what came to be known as The Great American Songbook.  Those highly regarded albums which have never gone out of issue are regarded by many as defining the canon of 20th Century popular song. 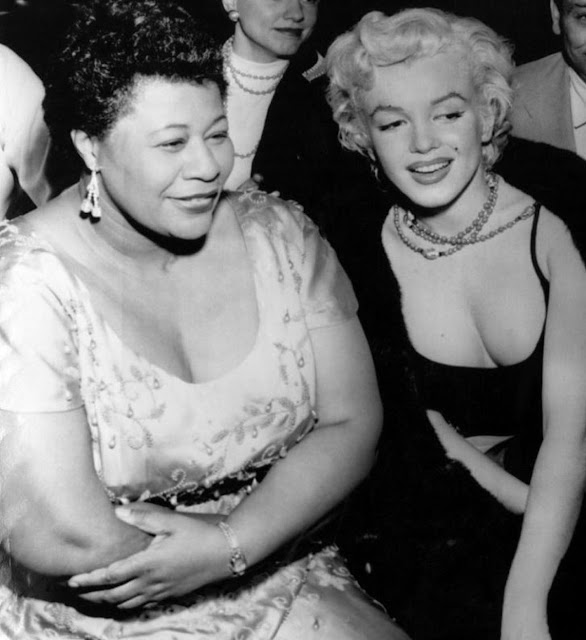 Ella and Marilyn Monroe were close friends.  The movie star was a longtime fan and the two also shared a bond of coming from abusive, troubled childhood.  Monroe gave Ella's career a big boost in 1955 by convincing the owner of the posh Sunset Strip Mocambo Club to book her by promising to show up stage side every night with celebrity guests.  Although the story is often told that the club would not book her because of her race, the real reason was that the owner did not think the overweight singer had sex appeal and glamourous enough for the gig.  It did prove a break out for her from singing in small jazz clubs to the country's top night clubs.


From the ’50 up to the early ‘90’s Fitzgerald toured widely in the U.S., Europe, and Asia performing solo concerts and collaborations with most of the leading bands and her singing peers as well as appearances with symphony orchestras.  She also made many television appearances as guest star or in her own specials.  She continued to record, including two Christmas albums that rate with those of Bing Crosby, Perry Como, Frank Sinatra, and Johnny Mathis as indispensable holiday classics.

In her later years Fitzgerald was plagued by health issues—obesity, diabetes, and repertory failure—which only slowed her down a little.  When diabetes cost her amputation of both legs below the knee in 1993 and impaired her eyesight, she continued to perform from a seat on stage. Ella was commemorated in a 2007 USPS  Black Heritage stamp.

She died in her Beverly Hills home attended by her adopted son Ray Brown Jr. and granddaughter Alice on June 15, 1996 at the age of 79.