Jan Ernst Matzeliger. the immigrant mulatto  who didn't seem to fit in anywhere.

On May 19, 1885 Jan Ernst Matzeliger’s revolutionary Shoe Lasting Machine was introduced into production at a Lynn, Massachusetts factory.  Within a few years American production of factory-made shoes exploded and costs per pair to consumers dropped more than 50%.  Lynn became the center of a major industry.

Matzeliger’s road to being an inventor was anything but ordinary.  He was born in 1852 in Paramaribo, Dutch Guiana (now Surinam) in South America of a Dutch engineer and a local Black woman.  Matzeliger inherited his father’s talent for mechanical equipment, working with him at his machine shop from the age of 10 and mastering the repair and maintenance of complicated machinery.

But despite his talents, his future was clouded.  As a creole or mulatto he could not be sent to Holland for a professional education and he was not well accepted either among the white colonial elite or the mostly African and Indian local population.

At the age of 20 he signed on a merchant vessel and spent two years as a seaman before deciding to settle in Philadelphia.  Knowing only rudimentary English, he had a hard time finding work until connecting to the local Black population through church.  They helped him find work repairing equipment of various kinds before he got a steady job in a small shoe maker’s shop.

Local shops like the one in which he worked still made most of the shoes worn by Americans.  The introduction of heavy sewing machines and cutting equipment had increased the speed at which shoemakers could produce their wares since the peg and awl days of hand construction, but building finished shoes was still a laborious, hand operation.  Matzeliger took to his new trade, but recognized that tools could be improved.

In 1877 he moved to Lynn, where nearly 50% of the nation’s shoes were being produced in local factories.  The Civil War had stimulated the need for hundreds of thousands of pairs of shoes and boots to be manufactured quickly to meet the needs of the Army.  Using the same mechanical equipment that Matzeliger found in the local Philadelphia shop, companies were able to produce more by installing many cutting and sewing machines.

But shaping the tops and attaching them to the bottoms could not be mechanized and was done by highly skilled hand lasters who stretched and shaped leather over wood or stone molds called lasts and attached them to the soles.  Even the most skilled artisan could produce no more than 50 pair of shoes in a ten hour day.  The lasters were organized into a craft union which was able to demand high wages.

After trying for months, Matzeliger was finally able to get work in one of the local factories and began studying how the master lasters manipulated the leather and began sketching ideas.  He knew that he had to educate himself in English to read and master technical information, so he attended night school after his ten hour shifts.  He lived a lonely, isolated life as one of the few people of color in Lynn shunned by his fellow workers.  He lived in a cramped room and found his only comfort in the fellowship of the local Congregational Church, the only one in town that accepted Black members.

Slowly, Matzeliger began to find solutions to the complicated puzzle and began to make models of a new machine from whatever meager materials he had at hand—scrap wood, wire, a cigar box, bits of metal he laboriously hand shaped.  By the early 1880’s he knew he was onto something, but needed money to get the materials build a full scale working model.

Word of his tinkering got out, despite his efforts at secrecy and he was pressured, if not threatened, by the skilled hand lasters to abandon his project.  But it was also attracting interested potential buyers.  He was offered first $50,000 and eventually $1.5 million for the rights to his as yet unpatented machine.

Knowing its true value he would not sell.  He held out until he got the money to finish his model in exchange for a two-thirds share in the machine. 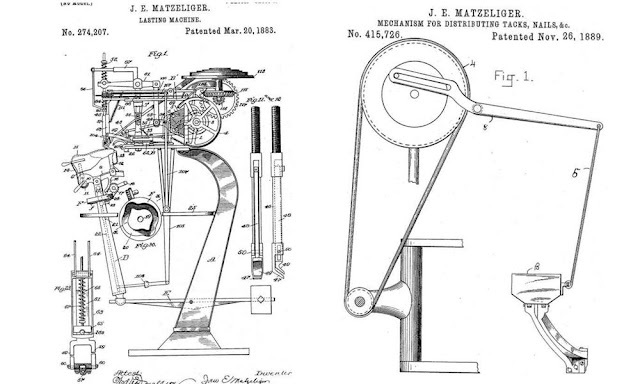 Mechanical drawings for Metzliger's shoe lasting machine and another improvement to shoe production, a tack distributor.

After completing his third model in 1883 he applied for a patent.  Patent Office officials in Washington at first refused to believe that a machine could actually do all of the complicated actions of a laster as many failed patents attested.  They sent an inspector to witness the machine in action.  Astonishingly, it worked as advertised and Matzeliger’s patent was granted.

His perfected machine held a shoe on a last, gripped and pulled the leather down around the heel, set and drove in the nails, and then discharged the completed shoe. It could produce up to 700 pair of shoes a day. 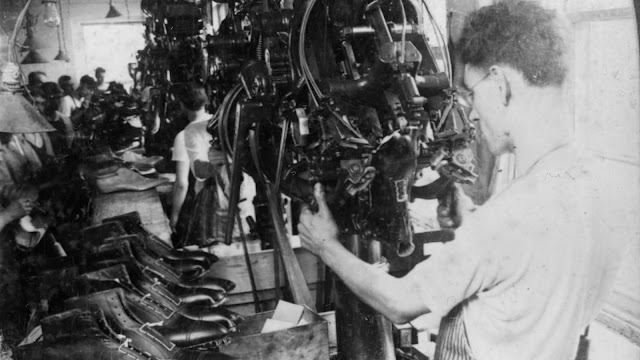 An operator using Matzeliger's lasting machine on a busy factory floor.  Completed shoes to his left.

After the 1885 introduction into production, demand for Matzeliger’s machines soared.  In 1889 the Consolidated Lasting Machine Company was formed with Matzeliger a substantial minority owner.  His future seemed bright.  He continued to work on other improvements for shoe production and submitted five more patent applications.

But before reaping the benefits of his inventions, still living alone in a single room, Matzeliger died of tuberculosis the same year.  He left his models and his stock in the new company to the congregation that took him in, the First Congregational Church in Lynn. 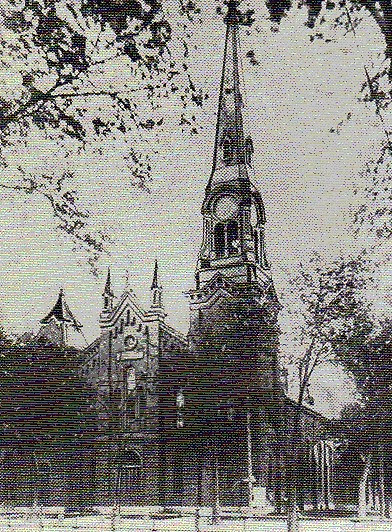 The First Congregational Church in Lynn, Massachusetts where Matzeliger finally found welcome and refuge was the beneficiary of his patents and ownership share in the company that produced his machines after his early death.  It was a legacy so valuable that it still benefits the congregation. 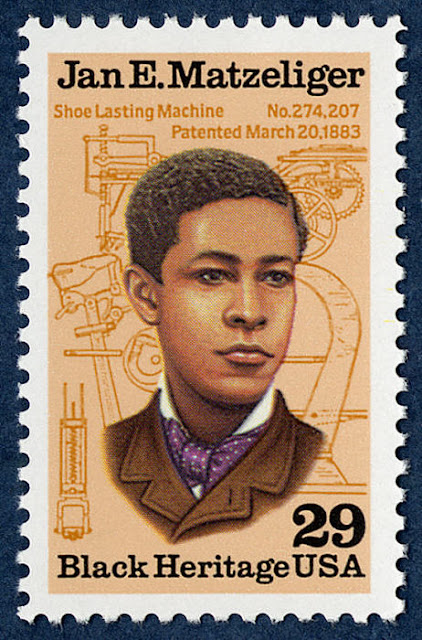 Matzeliger himself slipped into obscurity until “rediscovered” by Black history researchers.  He was honored on a postage stamp on September 15, 1991.

Posted by Patrick Murfin at 5:20 AM