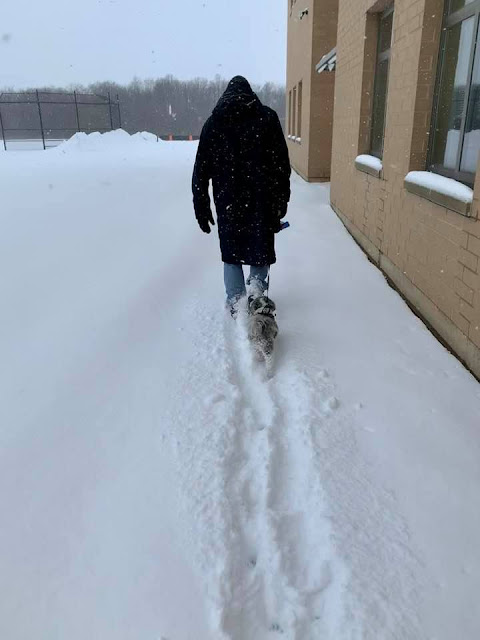 This man (Tom Steffens) and dog are not homeless themselves but their trudge illustrates the conditions many many of the McHenry Count homeless have to endure in the cold and snow emergency.  Photo by Beth Hoover.

After a mad scramble on Thursday, February 4 the homeless in McHenry County had for the first time this winter emergency cold weather housing in local hotels available.  A County Board Finance Committee meeting that morning made clear that there was no emergency housing plan or any immediately available funding to start one. 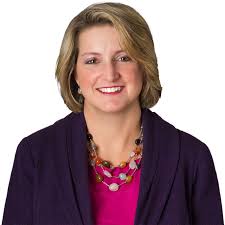 District 3 McHenry County Board Kelli Wegener got the ball rolling on an emergency push to put the homeless up in hotels until temperatures once again reach the 20s,

That afternoon Democratic District 3 County Board Member Kelli Wegener, who is also the church administrator for the First Congregational Church of Crystal Lake, sprang into action along with her senior pastor Eric C Fistler.  They sent e-mails to the members of the Faith Leaders of McHenry County, local congregations, and social service organizations asking for emergency funding to place the homeless in hotel rooms while the crisis lasted.

Tree of Life UU Congregation administrator Judy Stetner received the appeal and called me in my role as coordinator for Compassion for Campers.  I was able to authorize the immediate release of $4,000 leaving over $1,000 in our account for the purchase of new camping gear as needed.  A total of more than $9,000 was raised that night with more expected to come through in the next few days.

Hope Takes Action, a program of the Society of St. Vincent de Paul is administering the emergency hotel room program.


Hope Takes Action, ministry of The Society of St. Vincent de Paul, a lay, volunteer, Catholic non-profit stepped up to collect, administer, a distribute the funds.  By Friday homeless individuals were being identified and placed in Super 8 Hotel rooms in Crystal Lake and McHenry.  Local police departments, the County Sherriff’s office, and social service agencies were reaching out to the homeless to inform them of the availability.

The following announcement was widely circulated:

HOUSING the LOCAL HOMELESS during the FRIGID COLD:

Additional support to shelter the homeless has been set up in McHenry County.  If you or someone you know is homeless and living in places unfit for human habitation, please contact Hope Takes Action at 815 385-3251.

You can also call the police/sheriff's office and they will take the person to the shelter.

This emergency service will remain available until the temperatures increase to above 20 degrees for a high.

This morning Jeff Röt Hermel, veteran who has faced homelessness himself posted the following testimonial on Facebook:

Great start to a frozen day. I passed a guy walking in this bitter cold and I recognized him as a local homeless vet that I spoke to years ago. I was worried he had died because I haven’t seen him in a while. He and his camping buddy will now have a Super 8 room for the next couple of days thanks to a local charity and the Compassion for Campers program at Tree of Life Unitarian Universalist in McHenry Illinois. Ty fb for allowing that to come together also.

So a stopgap program is in place for now thanks to the energy and dedication of individuals and faith communities but a far greater need continues.

The sad fact was that when McHenry County was hit by a major snowstorm earlier this week on top of deep layers left by earlier storms and that was followed by Arctic temperatures which will stay in the teens and single digits for more than a week there were no emergency beds available on a walk-in basis for our unhoused population and no plans for such service despite the perfectly predictable crisis.

The traditional rotating PADS shelters hosted by area churches have not been in operation since last March when the Coronavirus hit and there are no plans to resume that service even after restrictions are limited.  Pioneer Center which operates a long-awaited permeant shelter has restricted admissions and limited beds due to Covid-19 protocols.   A handful of other agencies have had a limited number of beds, but none for emergency use.

Compassion for Campers stepped up to provide those with no reliable housing including campers, those living in vehicles, couch surfers, and those who stay a few days in motel rooms until their Social Security, unemployment, or other benefit money runs out each month, with camping supplies, gear, warm clothing, and other essentials.  It has been a pitifully inadequate response to a chronic problem but was the best we could do.

Unfortunately just as the weather emergency began, Compassion for Campers had to reduce its distributions from twice a month to monthly and centralized them at Warp Corps, 114 North Benton Street in Woodstock.  The storm hit on what would have been a scheduled event on February 2 in McHenry.  We had no way to notify our clients and open on that date in at Warp Corps. 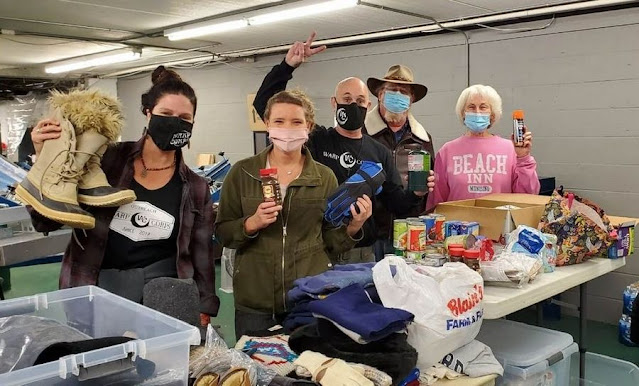 Warp Corp folks and Compassion for Campers volunteers at a regular distribution at the Woodstock site.

Now for those who can’t or won’t access the hotel rooms in the short run, Compassion for Campers willstr be bringing their major camp supplies—tents, sleeping bags, pads, and stoves to Warp Corps on Tuesday February 9 to be available on a walk-up basis to those in need in addition to supplies and warm clothing Warp Corps already has on hand.  Many thanks to Rob Mutert, Heather Nelson, and Carlos Salgado for their continuing work with the unhoused.

Compassion for Campers will be bringing their full range of supplies to Warp Corps on Tuesdays February 16, March 16, and April 13 from 3:30 to 5 pm.

The current emergency should be a wake-up call to the county to establish a regular emergency plan and protocol including reliable funding.  Better yet more safe beds and accommodations for the homeless should become a top priority of the County government, the community, and concerned social service agencies and providers.  Many of those entities have been part of a Continuum of Care Committee for years now.  That group has to become even more focused on finding some permeant solutions to a chronic problem.

Meanwhile if you wish to contribute to these efforts on behalf of the homeless you can call Hope Takes Action at 815 385-3251 or contributions to Compassion for Campers Donations by sending a check made out to Tree of Life UU Congregation, 5603 Bull Valley Road, McHenry, IL 60050 with Compassion for Campers on the memo line. The donations are placed in a dedicated fund and not used for any other purpose.  Tree of Life also donates all of the administrative expenses of the program

Posted by Patrick Murfin at 7:14 PM