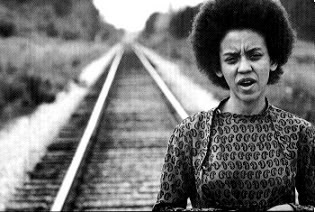 Nikki Giovanni was born in 1943 in Knoxville, Tennessee in a close knit family.  She was inspired by her grandmother, a natural story teller, to explore the use of words.  After growing up in a middle class Black suburb of Columbus, Ohio, she attended Fisk University in Nashville, one of the most prestigious of the historically Black colleges.

At Fisk not only did she find her voice as a poet and writer, but she was immersed in the Civil Rights Movement and the growing militancy of emerging Black Power.  She served as editor of the campus literary magazine, participated in the Fisk Writers Workshop, and helped re-build the Fisk chapter of the Student Non-Violent Coordinating Committee (SNCC).  After graduation in turbulent 1968 Giovanni went on to graduate studies at the University of Pennsylvania and Columbia University in New York.

While still an undergraduate Giovanni published her first collection of poetry, Black Feeling, Black Talk in 1967 in response to the assassinations of Martin Luther King, Jr., Malcolm X, Medgar Evers, and Robert Kennedy.  A year later she followed up with Black Judgment, an exploration and appreciation of Black militancy.  The two books catapulted her into the front ranks of a new generation of poets and one who had appeal to wider audiences.  A third volume, Re: Creation published in 1970 cemented her place as a leading young Black voice.  She was soon embarked on popular readings, often incorporating Black music. 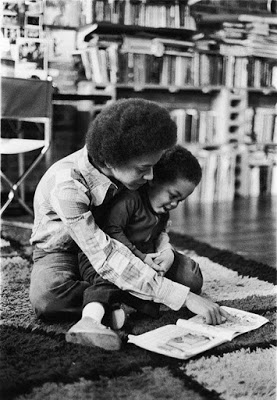 The birth of her son Thomas who she raised as a single mother had an enormous influence on Giovanni.


As Giovanni matured as a poet and woman her interests broadened.  She continued to write in clear, accessible language about her life and experiences, but later work was not as explicitly political as her early efforts.

She also began writing for children and young people beginning with Spin a Soft Black Song in 1971 and continuing through her Caldecott Medal winning Rosa in 2005.

Giovanni was teaching at Virginia Tech in 2007 when the tragic shooting occurred there.  She composed a memorial chant that was recited at the campus memorial service the next day.

She has written dozens of books, including two compilations, and non-fiction work.  Giovanni is among the most honored of contemporary poets having received the NAACP Image Award, the Langston Hughes Award for Distinguished Contributions to Arts and Letters, the Rosa Parks Women of Courage Award, and over twenty honorary degrees from colleges and universities around the country. 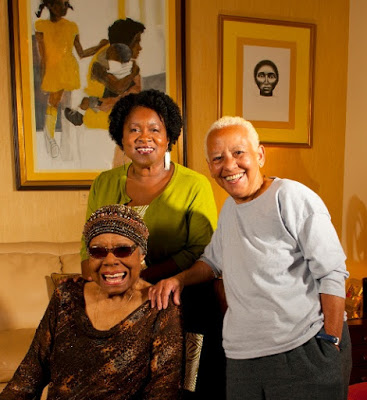 Maya Angelou and Giovanni with Joanna Gabbin, organizers for a tribute to Toni Morrison in 2012.

so he said: you ain’t got no talent
if you didn’t have a face
you wouldn't be nobody

and she said: god created heaven and earth
and all that’s Black within them

so he said: you ain’t really no hot shit
they tell me plenty sisters
take care better business than you

and she said: on the third day he made chitterlings
and all good things to eat
and said: “that’s good.”

so he said: if the white folks hadn’t been under
yo skirt and been giving you the big play
you'd a had to come on uptown like everybody else

and she replied: then he took a big Black greasy rib
from adam and said we will call this woeman and her
name will be sapphire and she will divide into four parts
that simone may sing a song

and he said: you pretty full of yourself ain’t chu

so she replied: show me someone not full of herself
and I’ll show you a hungry person

A Historical Footnote to Consider Only When All Else Fails

Why, LBJ has made it
quite clear to me
He doesn’t give a
Good goddamn what I think
(else why would he continue to masterbate in public?)

what i want to do

then my job is to not

do what i don’t want

It’s not the same thing

but it's the best i can

If i can’t have

my job is to want

that at least there

is something more to want

Since i can’t go

where the signs point

When i can't express

what i really feel

what i can express

and none of it is equal

but that’s why mankind

alone among the animals