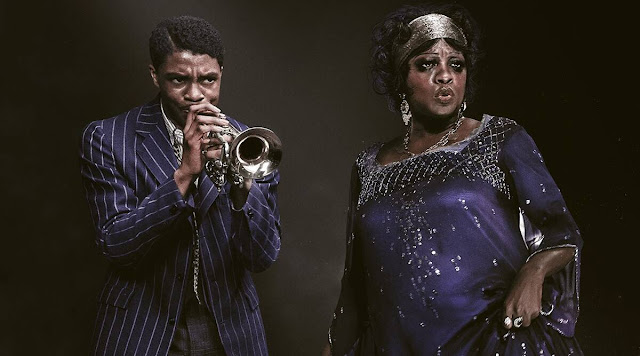 The Coronavirus pandemic and the closure of most movie houses for the last 11 months completely disrupted the awards season.  One film that did create buzz and garnered honors was Ma Rainey’s Black Bottom based on August Wilson’s 1984 Pulitzer Prize winning play.  Produced by Denzel Washington, Todd Black, and Dany Wolf, the film stars Viola Davis and Chadwick Boseman who died during post-production in August 2020, making Black Bottom his, the film is dedicated to his memory.

Just as Wilson’s play had done 37 years earlier, the picture revived interest in the bigger than life powerhouse who defiantly thumbed her nose not only at White culture and expectations, but at the conventional Black moral code as well. 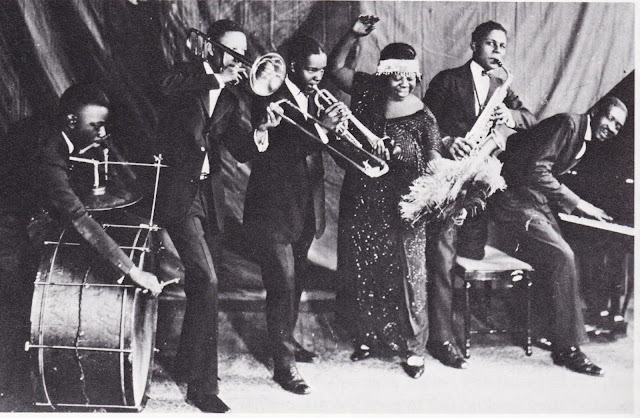 "Ma" Rainey with her late 20's Wild Cat Jazz band with Thomas Dorsey at the piano.


“Ma” Rainey deserved her recognition as almost the literal Mother of the Blues.  Although she did win a narrow White audience in the 1920s, most of her career that stretched from late 19th Century tent shows to the Southern Chitlin circuit of the 1930s was spent recording for and performing to Black audiences.  “Ma” Rainey had been retired from recording and touring since 1935 and had taken the money she earned from decades in show business to operate two local theaters in her home town of Columbus, Georgia when she died suddenly of a heart attack on December 22, 1939.  She was believed to be about 53 years old.  Her bold and brassy style of delivering the blues may have already gone out of style, but she had helped lay the groundwork for a new era of Black music.

Later in life Rainey would recall that she was born in Columbus on April 26, 1886.  Census records, however, do not confirm this and indicate that she may have been born in September 1882 in Alabama.  Such confusion over birth dates and even places of origin were common in Black families at the time who were often illiterate and lived lives where events flowed more like a river than a succession of compartmentalized dates and years.  And there were numerous reasons to fudge birth dates one way or the other.

At any rate Gertrude Malissa Nix Pridgett, the fistful of a names she was given, did grow up in Columbus and had at least two surviving brothers and a sister, Malissa, whose personal records were often confounded with Gerturde’s.  She had some rudimentary education, enough to read, write, and cypher and grew up in the First African Baptist Church where she first performed with the choir.  When she was about 12—assuming the 1886 birth date—she began performing in Black minstrel shows.

Minstrel shows were a highly stylized form of entertainment, and the most popular stage shows of the last half of the 19th Century.  The form was invented and developed by White performers in black face, doing songs, dances, jokes, and sketches either imitative of Black music or invented out of thin air.

By the late years of the Century the form was as popular with Black audiences as white and Black troupes started touring.  These tent shows—unlike White troops—Blacks had no access to local theaters or opera houses—then re-interpreted faux Black music for their people, often absorbing elements of real folk culture.

It was an odd and slow process.  Young Gertrude Pridgett was not the only performer learning the ropes in Black Minstrelsy.  W. C. Handy, who claimed to have “invented the blues,” toured on the Black Minstrel Circuit and rose to be the band leader in a leading company.  So did Jelly Roll Morton, who would stake his own claim to being a founder of the blues.

Gertrude would recall that she first heard the blues around 1902.  She quickly incorporated it into her Minstrel act.  In 1904 she married fellow minstrel Will Rainey and the two launched their own act.  They were successful enough that they were able to start their own troupe, the Alabama Fun Makers Company.  Two years later in 1906 they folded their show into Pat Chappelle’s more successful much larger Rabbit’s Foot Company.  The couple was billed as Rainey and Rainey, “Black Face Song and Dance Comedians, Jubilee Singers, and Cake Walkers”.  Those referred to traditional minstrel forms and indicate that as yet the blues were only a minor part of their act. 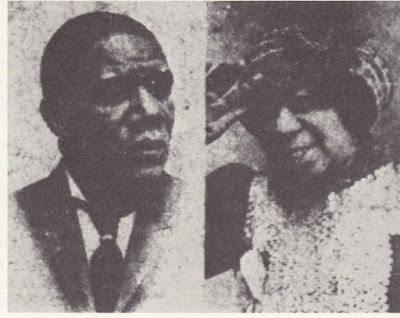 These blurry images are the only ones known of Rainey and her husband when their act was billed as Rainey and Rainey Assassins of the Blues.


But it kept getting bigger.   By 1910 Mrs. Rainey was being advertised independently of her husband as “Mrs. Gertrude Rainey, our coon shouter,” a strong indication that most of her material was now Blues.  Management of the company changed hands in 1912 when Chappelle, a Black showman, died.  White entrepreneur F. S. Wolcott took over the show.  He had the money to expand it—often sending out two companies of more than 50 performers each including a 10 piece band under circus-like big tops.

By 1914 Rainey and Rainey, Assassinators of the Blues were headlining the show.  That year in New Orleans Rainey first met Joe “King” Oliver, Louis Armstrong, Sidney Bechet and Pops Foster who were incorporating blues forms into the creole sounds of traditional street brass bands and inventing jazz.  In turn their experimentations influenced the Raineys. 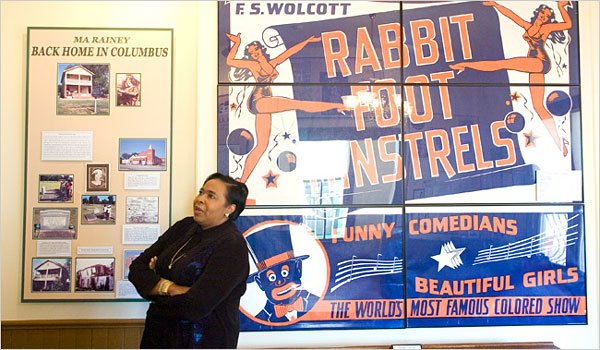 This rare poster promoted the famed Rabbit Foot Minstrels, Rainey's long time touring home when it was under the white management  of F.S. Wolcott.  In now hangs in the Columbus, Georgia museum housed in her former home.


About the same time Rainey encountered a young, aspiring blues shouter, Bessie Smith.  Legend has it that Rainey kidnaped the rising star and held her captive to sing in the Rabbit’s Foot Company.  Although it is true that Rainey mentored the younger singer during her two year stay with the show, there is no indication that Smith was held against her will.

The blues was beginning to catch on around the World War I era when some White artists were adapting it for vaudeville acts and making some recordings.  It wasn’t until 1920, however, that sides were issued by veteran Black vaudevillian Mamie Smith who scored a million copy seller with Crazy Blues.  It was considered the first commercial vocal recording of the blues by a Black artist.  That got the attention of other labels and there was a scramble to sign similar artists.  In 1923 Rainey’s former protégée Bessie Smith began her recording career for Columbia Records.

In December 1923, two months after Bessie Smith’s first release, Rainey laid down her first tracks for J. Mayo Williams in Chicago for Paramount Records.  Among the eight songs recorded in that first session were Bad Luck Blues, Bo-Weevil Blues, and Moonshine Blues each were hits, released under the name “Ma” Rainey, a bow to her senior status among female blues shouters.  The label snatched her up to a long term contract and began to market her heavily as the Mother of the Blues, the Songbird of the South, Gold-Neck Woman of the Blues and the Paramount Wildcat.  Over the next five years the label would release over 100 Ma Rainey records and discovered that not only did she sell in the expected race records markets of the South, but in some northern cites to white audiences. 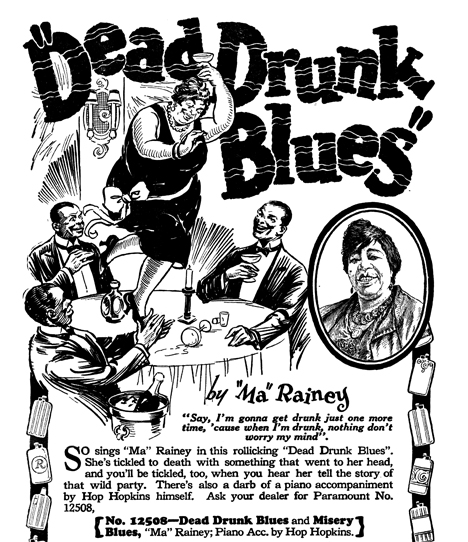 I despite her success with Paramount, it was in some ways an unfortunate match for her.  Unlike competitors in race records including Okeh, Blue Bird, and RCA Victor subsidiaries, the quality of Paramount’s recordings were inferior and muddied due to their production process and inferior shellac used on the discs. So although scores of Rainey’s performances were recorded, they never adequately captured her full power.

In 1924 Rainey made some records with her old friend Louis Armstrong who in those days frequently teamed up with other artists in a variety of genres.  Together they made Jelly Bean Blues, Countin’ the Blues and See See Rider, the latter a seminal song in blues history that has been enshrined in the Grammy Hall of Fame, and was included by the National Recording Preservation Board in the Library of Congress National Recording Registry.

The song’s origins date back to the first decade of the 20th Century and are about a semi-legendary bluesman named See See Rider, a former slave who sawed a homemade, single string fiddle.  After the Rainey/Armstrong version more than 100 recordings have been made, several classics of urban blues, rhythm & blues, and rock & roll later often under the title C.C. Rider.

Another highly influential song was Ma Rainey’s Black Bottom, her version of the ‘20’s dance craze based on earlier Rounder dances—referring to pimps and whores.  Rainey’s version virtually crackled with sexual tension and innuendo compared to the sanitized version staged by George White on Broadway in his Scandals.  Playwright August Wilson built his play around a fictionalized version of the recording session.

With the success of her records, Rainey was now a star in her own right.  She launched her own touring company under the auspices of the Theater Owners Booking Association (TOBA). She covered a circuit in the South and Midwestern United States.  It was an illustrious company.  Her first band leader was pianist Thomas Dorsey and his band was known as the Wild Cat Jazz Band.  Their first tour began in Chicago where they played before integrated audiences as they would in northern sections of the tour.  In the South, they played Black theaters, and occasionally in tents like in the old days.

Dorsey left the company temporarily in 1926 due to ill health and was replaced on piano by Lillian Hardaway Henderson whose husband was the combo’s cornetist, Fletcher Henderson.   Fletcher took over Dorsey’s duties as band leader, his first outing in that role.  Dorsey would re-unite with Rainey in 1928 for a series of Paramount recordings before they went their separate ways. Dorsey was billed as Georgia Tom Dorsey and Tampa Red played guitar on the sessions.

By 1928 Rainey was successful enough to purchase her own touring coach with her name emblazoned on the side, a symbol of a hugely successful touring act. 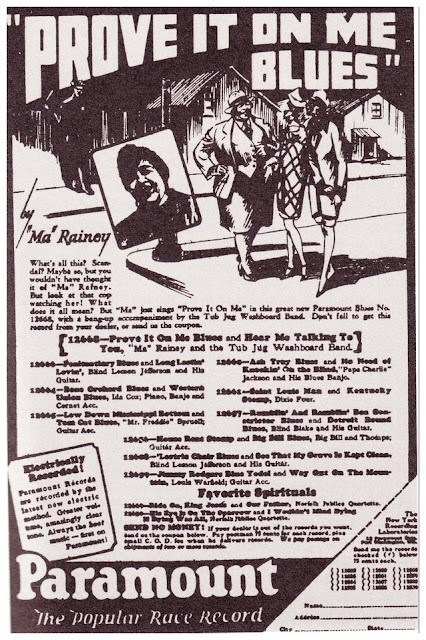 Rainey flaunted convention sexual morality and identity in Prove It on Me.


By this time Rainey sometimes appeared in a suit and tie rather than a dress sparking rumors of lesbianism which she addressed in songs like Prove It on Me in which she sang:

They said I do it, ain’t nobody caught me.

Sure got to prove it on me.

Went out last night with a crowd of my friends.

They must’ve been women,

… It’s true I wear a collar and a tie

Modern feminist and gay cultural historians call the song an early preview of the anthems of the ‘70’s.

Although Rainey’s records continued to sell well, Paramount did not renew her contract when it expired.  Whether potential scandal about her sexuality played a part, or if the company was anticipating changes in the public’s taste has long been debated.

For her part Rainey never pursued a new recording contract, preferring to concentrate on her tours, which she continued until 1935 when her increasing weight made the strain too much.  Her raw barrel house style had gone out of style replaced by a big band vocalist style on one hand represented by younger singers like Ella Fitzgerald and Billie Holiday and the primitive, guitar based Delta blues of Memphis Minnie and Robert Johnson on the other.  That’s when she headed home to Columbus. 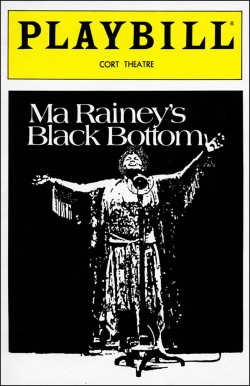 Rainey was nearly forgotten by all but hard core blues fans until Wilson’s play revived interest in her career.  The next year, 1983, she was elected to the Blues Foundation Hall of Fame.  In 1990 she was inducted as a roots influence into the Rock and Roll Hall of Fame.  She was honored by a Postal Service commemorative stamp in 1994.