The March for Jobs and Freedom Was Bigger than Dr. King— Focus on Black History Month 2021 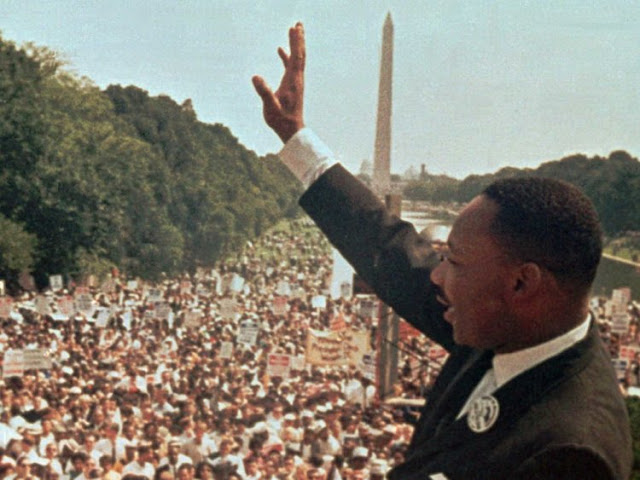 Dr. Martin Luther King's ringing I Have a Dream speech was the highlight and climax of the 1963 March for Jobs and Freedom in Washington and helped change America, but the March itself was bigger than any one man.

Like a lot of people back in ’63 I was glued to the television for the beginning-to-end coverage provided by CBS News of the March for Jobs and Justice on August 28.  I was a 14 year old in Cheyenne, Wyoming at the time.  I was both thrilled and awestruck.  Listening to Dr. King’s I Have a Dream Speech literally changed my life. 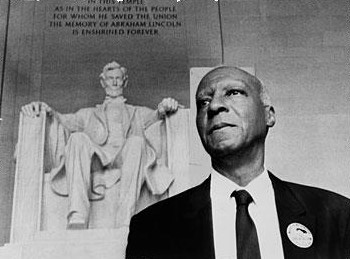 The March was the brain child of labor and Civil Rights leader A. Phillip Randolph.


The march originally was the brainchild of an elder of both the labor and Civil Rights movements.  A. Philip Randolph, President of the Brotherhood of Sleeping Car Porters and of the Negro American Labor Council as well as a Vice President of the AFL-CIO modeled his call for a march on Washington on a similar event he had planned back in 1941 to force President Franklin D. Roosevelt to open up employment in the burgeoning defense industry to Blacks.  Just the threat of thousands of Negros descending on the Capital had been enough to cause the President to establish the Committee on Fair Employment Practice and bar discriminatory hiring in the defense industry.  Randolph wanted to bring similar pressure on President John F. Kennedy and Congress to move on stalled Civil Rights legislation, but also to bring up new issues of jobs that had been overshadowed by the tumultuous battle for civil rights in the South. 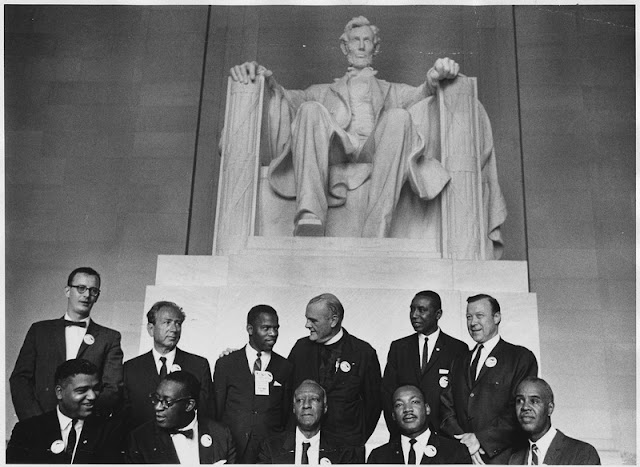 
In addition Randolph sought support from the Labor movement, most significantly from Walter Reuther, President of the United Auto Workers (UAW).  The White dominated craft unions of the AFL, however, were notable for their absence.

Bayard Rustin of the pacifist Fellowship of Reconciliation (FOR) and the organizer of the 1947 Journey of Reconciliation, an early forerunner of the Freedom Rides that was meant to test a Supreme Court ruling that banned racial discrimination in interstate travel, was tapped to coordinate volunteers and logistics, recruit marchers from across the country, and attend to all of the other details of the march while Randolph pulled together political, labor and religious support for the march. 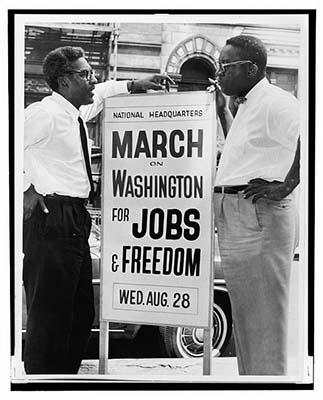 Veteran pacifist and Civil Rights leader Beyard Rustin of the Fellowship of Reconciliation was the Deputy Director of the March and in charge of most of the planning and logistics.  As an openly Gay man his public profile was kept low.  Retail workers labor leader Cleveland Robinson was named Chairman of the Administrative Committee.


Other than being a star speaker that day King was not heavily involved in the planning or management of the event. He even left the details of mobilizing SCLC supporters to his aides.

As word spread, it became apparent that the march was going to turn into the largest event of its kind in history.  The media began to pay attention.  On the day of the march, buses poured into the city from sleepy Mississippi towns and from gritty industrial hubs like Detroit and Chicago.  Trains from Boston, New York, and Philadelphia were jammed.  Thousands of local Washington residents swelled the throng.

Organizers put the crowd at more than 300,000.  The National Park Service, in charge because the speakers’ platform was erected at the Lincoln Memorial, said 200,000.  Whatever was the case, crowds filled the Mall far passed the Washington Monument.  About 80% of the marchers were Black. Marchers included many celebrities including actors like Sidney Poitier, Harry Bellefonte, and Charlton Heston—yes that Charlton Heston. 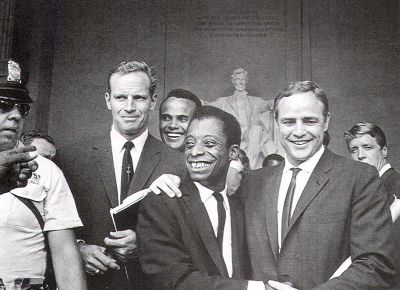 
It was a Wednesday afternoon but the three major broadcast networks broke away from their usual programming of afternoon soap operas to cover the swelling crowd and speeches live.

Marian Anderson, who had sung on the same steps at the invitation of Eleanor Roosevelt after she was denied use of the Daughters of the American Revolution Constitution Hall in 1939, opened the program with the National Anthem.  Several other performers took to the stage over the course of the program, perhaps most notably Peter, Paul and Mary, Joan Baez, Bob Dylan, and Mahalia Jackson. 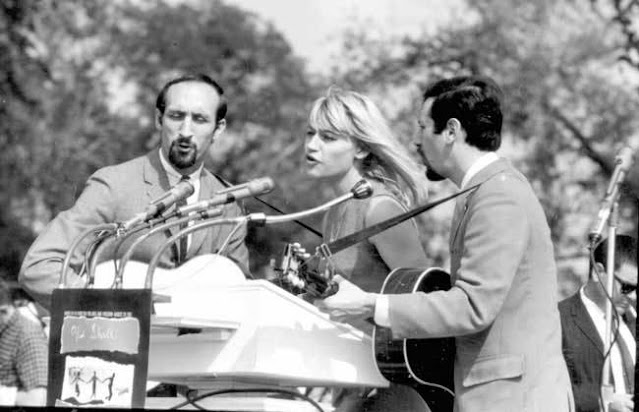 Peter Paul & Mary were among the notable entertainers who performed.  They led the crowd in Pete Seeger's anthem If I Had a Hammer. Seeger himself did not appear despite his close association with the Civil Rights Movement in he South because memories of his his former Communist Party membership and indictment for his First Amendment refusal to testify against others before the House Un-American Activities Committee.


The Catholic Archbishop of Washington, Patrick O’Boyle led the invocation.  Other religious leaders on the program included Dr. Eugene Blake on behalf of the Protestant National Council of Churches and two leading Rabbis.

After Randolph’s opening remarks each of the major civil rights leaders took the stage in turn. Floyd McKissick had to read the remarks of CORE’s James Farmer, who was in a Louisiana jail. The youngest leader, John Lewis of the militant SNCC, excoriated the Kennedy Administration for not acting to protect Civil Rights workers who were under regular and violent attack across the South.  Randolph and others who were trying to flatter and coax the President into action forced Lewis to strike the most inflammatory portions of his speech, but what was left was still plenty critical. 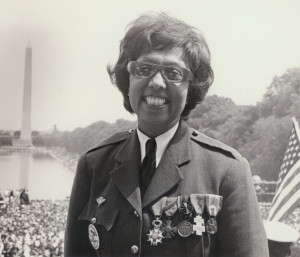 Despite their notable contributions to the Civil Rights Movement key figures like Rosa Parks, and Dianne Nash were excluded from the speaker's list.  In the end the only woman to address the crowd was singer and dancer Josephine Baker who had spent most of the previous 30 years as an expatriate in Paris.  She wore her World War II uniform as a decorated member of the French Resistance.


Slain NAACP organizer Medgar Evers’s wife Myrlie was on the announced program to lead a Tribute to Negro Women, but did not appear.  In fact several prominent female figures in the Movement were either not invited or had their requests to be added to the program rejected by Randolph.  In the end the only woman to speak was jazz singer and dancer Josephine Baker who wore her World War II Free French uniform emblazoned with her medal of the Légion d’honneur.

It all led up the last major address—the highly anticipated speech of Dr. King.  If civil rights veterans knew what to expect from the notoriously eloquent leader, millions of Americans viewing at home were in for an eye opening experience.  The speech, built to the thundering crescendo:

Let freedom ring. And when this happens, and when we allow freedom ring—when we let it ring from every village and every hamlet, from every state and every city, we will be able to speed up that day when all of God's children—black men and white men, Jews and Gentiles, Protestants and Catholics—will be able to join hands and sing in the words of the old Negro spiritual: “Free at last! Free at last! Thank God Almighty, we are free at last!” 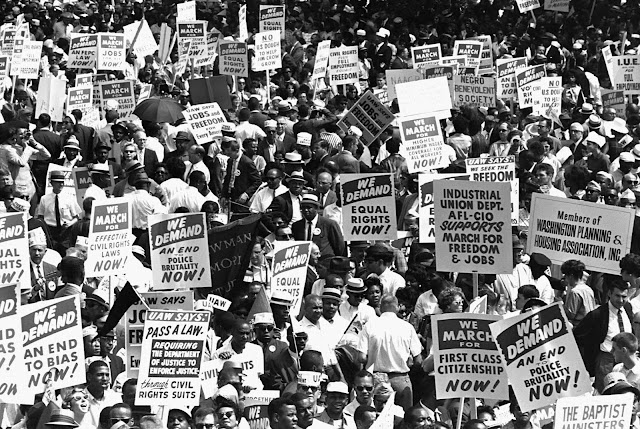 The hundreds of thousands of ordinary folks who showed up for the March for Jobs and Justice were just as important as any of the movement heavies and celebrities.

The nation, or much of, it was awestruck and impressed.  That speech, along with the continued televised violence against Blacks struggling for equal access to public accommodations and the vote, helped set the stage for the major Civil Rights legislation enacted in the next three years.