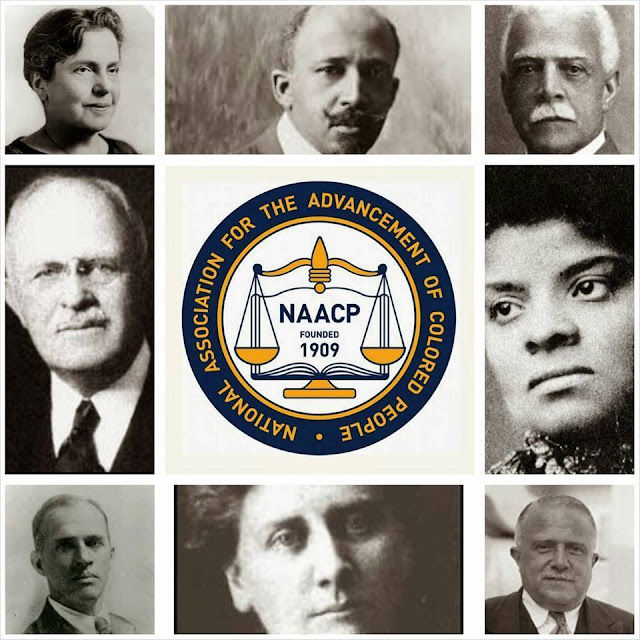 Today is not only the birthday of the Great Emancipator, but also of the anniversary of the founding of America’s oldest Civil Rights organization, the National Association for the Advancement of Colored People (NAACP) in 1909. The date, falling on the centennial of Abraham Lincoln’s birth, was not coincidental.  It was largely a response to the 1908 race riots in Lincoln’s home town of Springfield, Illinois. 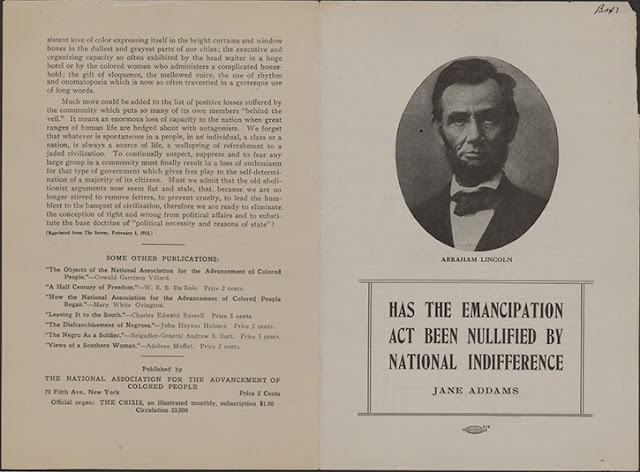 The early NAACP often explicitly linked the organization in publications like this pamphlet by Chicago social worker and activist Jane Adams.


In 1905 a group of Black intellectuals led by Harvard historian W.E.B DuBois met in Fort Erie, Ontario on the Canadian side of Niagara Falls—they could not meet in American hotels because were segregated and most would not rent to Blacks—to discuss how to counter the alarming advance of Jim Crow laws across the old Confederacy and most boarder states.  They agreed that there was a need for a single national organization to speak for the interests of colored people.

The result was a loose organization called the Niagara Movement. It was beset by financial burdens, leadership squabbles, and difficulty in getting the press to pay attention to the complaints of mere Negros. 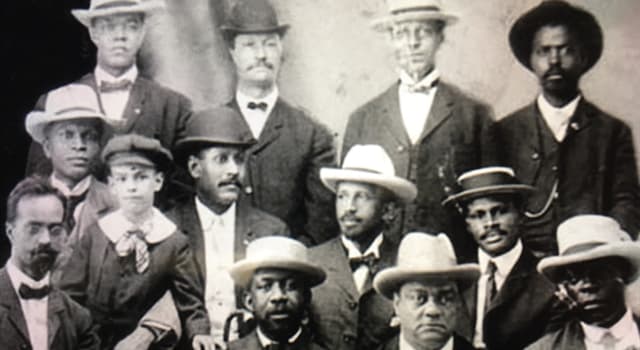 Black leaders and intellectuals had to meet in Canada to found the Niagara Movement, a fore-runner of the NAACP.  W,E,B. DuBois center in white hat.


DuBois realized that to be effective, he would have to recruit White liberals, with their personal wealth and access to the press.   In 1908 Mary White Ovington, the descendent of a family of abolitionists and prominent Unitarian lay woman and social activist,   Dr. Henry Moscowitz, Oswald Garrison Villard, William English Walling joined the movement.

Ovington was the prime mover after the Springfield riots erupted when she realized the need for a stronger organization. Along with Walling, a muckraking journalist, and Moscowitz, a leader of the largely ethnic Jewish Society for Ethical Culture she issued a call to form a new organization.  They sent out a call to over 60 leading liberals.

In response a call to a founding Convention was issued on Lincoln’s Birthday, 1909.  A formal founding convention was finally held in a New York settlement house in May.  DuBois chaired.

The Black leadership of the Niagara Movement although appreciative of the White support, was leery of joining an organization so dominated by whites.  Many refused to attend the founding convention of the new organization.  But DuBois and Chicago anti-lynching crusader Ida B. Welles, and others threw their support fully behind the new group known as the National Negro Committee.

At the second convention of the Committee in May 1910, the name National Association for the Advancement of Colored People was selected to replace The Negro Committee.  DuBois was the only Black elected to the Executive Committee as Director of Publicity and Research.

The first President was Moorfield Storey, a White Constitutional lawyer and for President of the American Bar Association.  He was a Democrat and classical liberal.   William English Walling, a Socialist and labor reformer who had investigated the Springfield Riots was named Chair of the Executive Committee.  For balance the largely ceremonial job of Treasurer went to John E. Milholland, a so-called Lincoln Republican and leading Presbyterian layman.  Most of the duties ordinarily assigned to the Treasurer were given to a Disbursing Treasurer, Oswald Garrison Villard, a journalist who was a veteran of the anti-imperialist movement against the Spanish American and Philippine Wars.  Rounding out the original officers was Executive Secretary Frances Blascoe charged with day-to-day administration.

A headquarters was established in New York City and the NAACP received its charter in 1911 to:

…promote equality of rights and to eradicate caste or race prejudice among the citizens of the United States; to advance the interest of colored citizens; to secure for them impartial suffrage; and to increase their opportunities for securing justice in the courts, education for the children, employment according to their ability and complete equality before law.

The same year DuBois launched The Crisis as the official organ of the NAACP.   Under his leadership it became the leading intellectual journal of Black life. 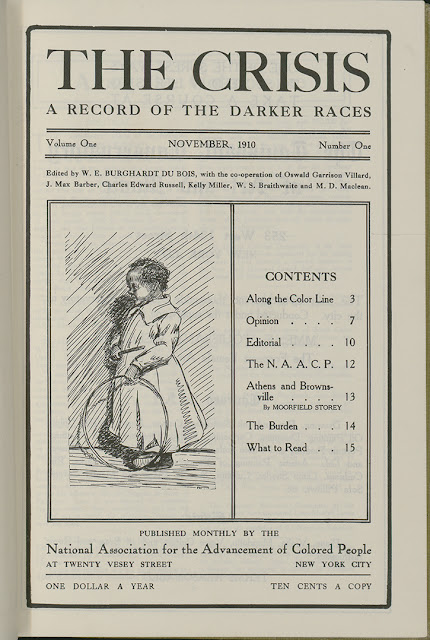 Under the editorship of Dubois, the NAACP magazine The Crisis became a civil rights intellectual flag ship.

Among the organization’s early battles were campaigns against increasing voter restrictions in the South, vigorously opposing the segregation of the Federal Government under Democrat Woodrow Wilson, and launch a thirty-year-long anti-lynching campaign 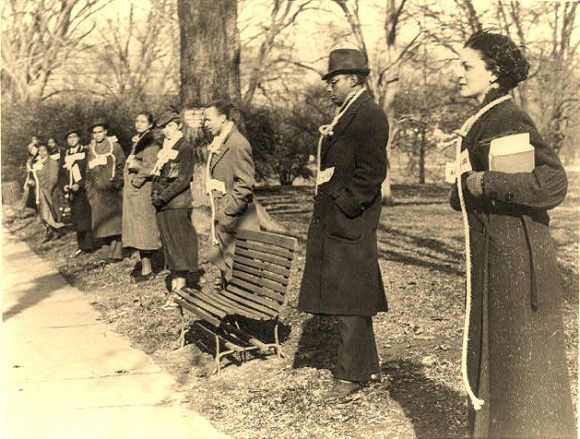 The NAACP's anti-lynching campaign continued for decades as in this 1939 protest by Howard University students.


Through the years the NAACP often filed law suits to affirm civil rights.  The NAACP Legal Defense Fund raised the money to employ lawyers like Thurgood Marshall who won the famous Brown v. the Board of Education case outlawing public school segregation.

In the Fifties it supported, but also was sometimes at odds with, the boot-on-the-ground style of confrontation and protest promoted by Martin Luther King and the Southern Christian Leadership Conference (SCLC), Congress of Racial Equality (CORE), and the Student Non-Violent Coordinating Committee (SNCC).

It took a long time for Black members to assert leadership in the integrated organization.  The first Black executive secretary was writer and diplomat James Weldon Johnson in 1920, and Louis T. Wright, a surgeon, was named the first black chairman of its board of directors in 1934.  It did not elect a Black President until 1975. 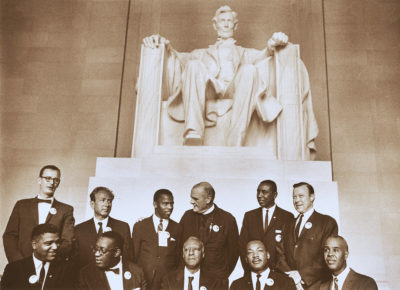 
Along with another integrated old line civil rights group, The Urban League this led to heavy criticism from Black Nationalist groups in the later 20th Century, many of whom, ironically looked to DuBois as their ideological inspiration.

In the 1990’s the NAACP has suffered embarrassing leadership turmoil which sapped its strength and led to funding crises.  Those issues were mostly resolved and the organization re-imagined its mission entering the current century.

Recently the venerable organization may be best known to the general public for its sponsorship of the annual NAACP Image Awards launched in 1967 and broadcast annually on national TV in 1974.

But in North Carolina the state branch of the NAACP under the Rev. William Barber II has emerged as a powerful voice in a new mass movement.  Led by Barber the organization assembled a broad coalition of forces including activists for voting rights, Women’s rights and health, Gay rights and equality, labor, public education, and the environment plus religious groups including the state’s Unitarian Universalist congregations.  With the state government firmly in the hands of ultra-conservative Tea Party types hell bent on undoing 60 years of social justice progress, the coalition began their dramatic Moral Monday rallies at the state capital of Raleigh which included scores of arrests for civil disobedience and focused the attention of the nation on the Tar Heel State.


In February 2014 the movement and allies from around the country came together for the Mass Moral March touted with considerable justification “the Selma to Montgomery March of our generation.”  Crowd estimates, of course varied from low ball numbers peddled by authorities and their allies in the press of 10,000 to obviously exaggerated claims of ten times that number by some over enthusiastic participants.  Suffice it to say many tens of thousands thronged the streets, including more than 1,000 Unitarian Universalists led by then UUA President Peter Morales.

It was the beginning of the spread of Moral Mondays to other states.  Along with the Black Lives Matter movement and the catastrophic Trump era assaults on hard-won voting rights and economic justice it has re-energized Black protest and resistance.  Barber has gone on to found a new Poor People’s campaign modeled after Dr. King’s last project.

Moral Mondays not only revived the NAACP as a premier leadership group, but they provide inspirations to activists around the country.  Dr. Dubois would be proud.